Recently, Qualcomm announced the development of their first 5G modem dedicated to IIoT applications. What challenges do current network systems face, what are the capabilities of the new modems, and why could cellular networks provide the solution for future wireless systems?

What challenges do current internet technologies have in the field of IIoT?

The industrial sector has historically been highly dependent on ageing technology, which is usually due to the productivity of such equipment. For example, a CNC released today may be able to operate 30% faster than its predecessors. Still, considering the large initial costs of such equipment, older CNCs in use can be more profitable. For starters, the equipment does not need to be replaced, and as such no need for any large investments. Secondly, the older CNC software is proven and reliable whereas a newer system may require retraining.  Overall, there is no need to fix what isn’t broken.

However, as more industrial processes become integrated with technology, there is a genuine problem connecting such devices to a singular network. Larger machines can utilize Ethernet connections, but these require installers to route long lengths of cable in potentially difficult to reach places. The use of wired connections also prevents such installations to be mobile, and using wired connections in remote places is next to impossible.

Current wireless solutions such as Bluetooth and Wi-Fi have their own challenges. While these may allow devices to be mobile, Wi-Fi suffers from maximum device support (i.e. Wi-Fi is quickly congested), whereas Bluetooth has an extremely small range. Furthermore, even though Wi-Fi has a range of up to 100 meters, this is only in clear environments, and most industrial sites are far larger than this. Therefore, Wi-Fi networks require repeaters, and moving in-between networks introduces significant delays and reconnections.

One wireless technology that could become the de facto for IoT and IIoT devices is cellular networks. Recognizing the potential of cellular networks such as 5G and 4G, Qualcomm has announced the release of their first 5G modem directly aimed at the IIoT market. The new modem, called the Qualcomm 315, was designed to be low-power, thermally efficient, and provide high bandwidth. Furthermore, the new chipset reduces the footprint of a typical modem by up to 50%, be pin-compatible with legacy LTE systems, and operate on most bands in most regions.

The new modem will integrate both 5G and 4G capabilities to provide industrial sites with a choice on what cellular networks they wish to implement, allow for 5G and 4G sharing, and integrate dual-frequency GNSS receiver. The modem also integrates an embedded Ethernet MAC for use in local networks, has a maximum upload speed of 330Mbps, a peak download speed of 1.54Gbps, and operates in the extended ambient temperature range. Companies that are already looking to utilize the new modem include Bosch, Fibocom, HMS, MeiG, Quectel, Schneider Electric, Siemens, Sunsea, and Telit. 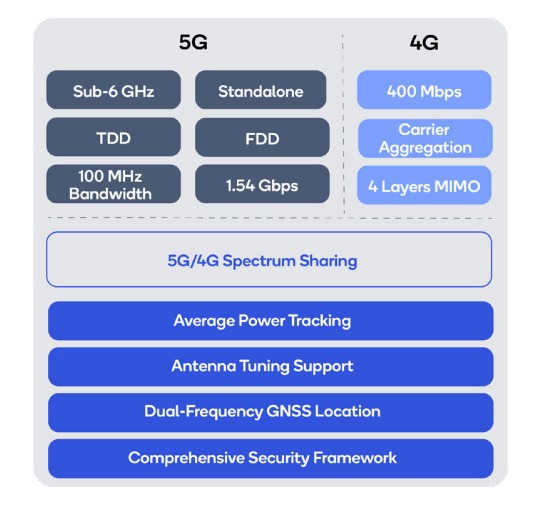 Why will cellular networks be the dominant industrial network?

The initial role of cellular networks was to transmit conversations wireless, and on the face of it would seem inappropriate for a digital network. However, as mobile phones became digital, the transmission of analogue signals was quickly replaced with digital signals, and this enabled more simultaneous connections and calls. In addition, as phones became more powerful, the demands from consumers put pressure on phone developers to start integrating features such as internet browsing and email reading.

This lead cellular operators to develop data services such as 2G, 3G, and 4G. But what makes cellular ideal for industrial sites lies in its requirements; long-range communication supports a high number of simultaneous connections while roaming between different cells uninterrupted.

Industrial sites are often large, and the vast number of connected devices can quickly pack up traditional wireless systems. For example, Wi-Fi supports a maximum of 250 devices, but in reality, this number is much smaller, and industrial sites can have potentially thousands of sensors. Because Wi-Fi devices cannot easily reconnect to other networks while in motion, Wi-Fi is largely inappropriate for an industrial setting.

As 5G networks become more established, and the development of private cellular networks enable companies to create their own internal services, it is clear that cellular-based technology will lead in industrial applications.

Could China block the acquisition of ARM by Nvidia?