What is RADAR and the need for compact RADAR?

The SATIRE project aims to develop miniature RADAR systems that can be housed in modular chips to replace current distance measuring systems such as LiDAR, SOANR, and stereoscopic image systems. What is RADAR, how does it compare to other methods for distance measuring, and what is the ultimate goal for project SATIRE?

RADAR is an acronym for Radio Detection and Ranging and is the method of object detection and distance measurement by using radio waves. Like SONAR, RADAR systems consist of a transmitter and receiver whereby the transmitter sends pulses of radio waves out. When those radio waves bounce off objects and reflect towards the receiver, the time difference is measured. Knowing that the speed of light is constant, the distance to that object can be determined using distance = speed x time. 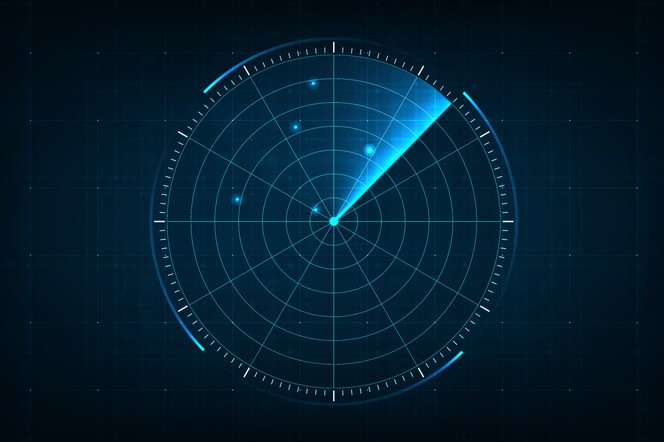 If the distance to an object can be determined, then the immediate area can be measured in all directions to provide mapping. Thus, many RADAR systems in operation have a rotating dish which allows them to do multiple reading at different angles to map their local surroundings. Such technologies have been critical to national defence (whereby enemy aircraft can be spotted hundreds of miles away), air traffic control (to determine the position of planes), and for geological surveys (i.e. the ground height profile can be obtained from orbit using RADAR).

How does RADAR compare to other distance measuring technologies?

Of all the different methods for ranging, RADAR by far provides the longest-range capabilities as a result of using long-wave radio waves (greater than mm range). LiDAR can provide short distance measuring (generally up to 250 meters however satellite can use LiDAR for mapping the surface of a planet). At the same time, SONAR either produces the shortest of just a few meters (when used in air), to 12km (when used in water).

When using a ranging technology to determine distance, its important to understand what the smallest possible distance that can be measured is. For example, LiDAR and RADAR systems can provide good resolution and ranges, but as the signals travel at the speed of light, it leaves very little time for circuits to count how long it takes for the signal to be sent and then received. Thus, must LiDAR and RADAR systems have a minimum distance which they can detect. One method for getting around this is to utilise complex methods of ranging such as those based on phase shift and detection. However, these are not only more expensive, but it can be difficult to incorporate into a fast-moving system that requires 360-degree vision. Interestingly, ultrasound-based ranging systems can provide very accurate ranging systems even right up to the transmitter/receiver itself.

Another important factor to consider when comparing ranging systems is their ability to penetrate the atmosphere and other obstacles that may not be important. For example, RADAR is ideal for use with long-range detection as it can penetrate rain and fog, whereas LiDAR, which is reliant on light reflection, cannot do so. This also leads to the need for the ranging system to be able to detect a wide range of objects. Most objects reflect RADAR signals (in fact, the military invest large amounts of money to try and make objects invisible to radar), meaning that RADAR can easily map areas with great accuracy. LiDAR, however, only works on surfaces that reflect the light from the LiDAR system.

What does the SATIRE project aim to achieve?

Project SATIRE is a project started by several Universities and institutions aimed to reduce the size of RADAR systems and stands for Scalable THz Miniaturised Radar for Industrial Applications). While RADAR can provide some important advantages over a LiDAR system, they do come with their own issues, including size and scalability. Thus, the SATIRE project is looking to create scalable integrated 300GHz radar sensors whose bandwidth will be above 50GHz. Each RADAR module will be designed to have a maximum size of 10mm x 10mm x 7mm, and utilise a lens for focusing. These modules will then be able to connect to produce MIMO systems (Multi-in Multi-out), that can use advanced methods such as beamforming to direct RADAR beams without the need for rotating mechanical system. According to the SATIRE project, if such a RADAR system can be successfully deployed, then RADAR systems can be complemented with other ranging technologies, such as LiDAR, to provide industrial sensor systems that can provide reliable ranging methods in most environments.

What applications will benefit from miniature RADAR systems?

Project SATIRE has the vision of creating miniaturised RADAR systems for use in industrial applications. Still, such a system could also be used in most autonomous driving systems, including cars, trains, trucks, drones, and self-driving hospital beds. Tesla is an example of a car company who have seen the benefits of RADAR and are using it as their primary ranging system for their future autonomous cars. While others have criticised Tesla for using RADAR, the system can reliably be used in fog, rain, dust, and snow, and Tesla the RADAR system with a whole range of other sensors including cameras, ultrasonic sensors, and complex AI systems.

Why the Car Industry is Halting Production

What's all this Ebike buzz-chat about, anyway?