LiDAR is a technology that creates a depth map using light ranging, but the technology is expensive and bulky. How can MEMS mirrors help to bring the cost of LiDAR down, what is LiDAR, and how can LiDAR help IoT solutions?

LiDAR stands for Light Detection And Ranging and operates in a very similar way to RADAR. A light source, often a laser, fires a beam of light, and the time between the beam being fired, bouncing back, and being detected by a sensor is carefully measured. From here, the distance between the light source and a distant object can be calculated. However, not all LiDAR systems utilise simple timing mechanisms, for applications that require accuracy in short distances, phase shifting is used whereby the difference in phase between the outgoing light and the incoming light can be used to infer distance.

What challenges does LiDAR currently face?

LiDAR is a technology that has many practical applications, including self-driving cars, fully autonomous drones, and 3D space mapping. However, LiDAR has several issues that hinder its ability to be used widely, and this also makes it expensive. The first issue comes from the need for a mechanical mirror to deflect the laser beam, and this uses a motor that spins the mirror around. Such a motor not only consumes large amounts of power, but it also makes the system incredibly bulky. Such mirrors are also often expensive, and the net result is a large, heavy system that can only be realistically integrated into large applications. While LiDAR can be made cheap by omitting a rotating mirror, the result is the incredibly narrow field of view, but many LiDAR applications require a wide field of view.

What are MEMS mirrors?

MEMS stands for Micro-Electro-Mechanical Systems and can be thought of as tiny machines powered by electricity. These can include cogs, gears, wheels, and cantilevers which are used to produce most sensors, including gyroscopes, accelerometers, and vibration sensors. MEMS mirrors are miniature mirrors that are adhered to a small mechanism which deflect upon passing an electrical current through them and can be used to point the mirror at different angles.

How have researchers used MEMS mirrors to help LiDAR?

Recognising that MEMS mirrors can be used for laser deflection, a team of researchers from the University of Florida have created a prototype LiDAR system that not only has a wide field of view, but consumes very low amounts of power, and can be easily mounted in small applications. The LiDAR system takes advantage of MEMS mirrors to act as the scanning element of the LiDAR system, and the result is that a 9V battery can power the LiDAR device. The LiDAR prototype also integrates a passive IR sensor (generally used for security systems), to detect the presence of individuals, and if none are detected, then the system powers down. This makes the prototype ideal for residential and commercial applications that may use smart environmental control systems (including heating, and air-conditioning systems). Keeping the design simple, the prototype utilises off-the-shelf parts to process distance data from the laser, but this is one of the bulkier and power-consuming components of LiDAR systems. The team plans to develop their own LiDAR system to not only reduce the size further but also reduce the power. 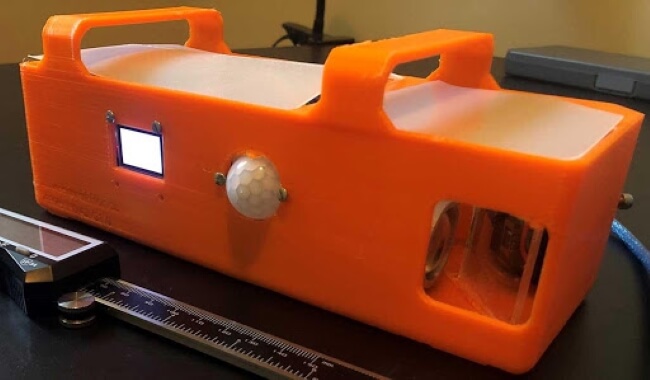 What is the future for LiDAR systems?

Making LiDAR smaller and cheaper will help to integrate it into many applications, including IoT sensors, autonomous vehicles, and control systems which can map the immediate environment around them. Such capabilities allow for object tracking, object recognition, and object avoidance which can be difficult tasks to achieve with a single camera. LiDAR has advantages over camera systems as it provides distance measurements meaning that a single sensor can tell the difference between an object in the foreground or background without the need for AI. While cameras can recognise objects based on their appearance (colour, shape, and size), LiDAR can, in theory, be used with object outlines, but this would only work when objects are stood out on their own. The resolution of the LiDAR system is great enough to produce smooth outlines of objects. Overall, LiDAR is a fast technology that will be highly beneficial in autonomous vehicles that need instant distance measurements without the need for AI algorithms to try and recognise objects in flat 2D images.