A Wireless and Wearable Polymer Temperature Sensor for Healthcare Monitoring

A high temperature (i.e. a fever) is often indicative of a flu-based illness, and it is no different for the COVID-19 outbreak. While handheld thermometers are used to monitor the temperature of the general public, more wearable based sensors are required in clinical settings to monitor patients, and this is for both flu epidemics and patients who are in for a wide variety of illnesses – with wearable temperature sensors being specifically employed in some regions of China during the COVID-19 outbreak.

While wearable sensors are used to monitor the temperature of patients in the hospital, they can also be used at home to continuously monitor a patient once they’ve been discharged (but still need some level of health monitoring), and they can be used to monitor a person during fitness regimes. So, there are a number of specific applications where wearable temperature sensors can be used and these types of sensors are emerging in different forms – both in academia and commercially from industry.

What are Temperature Sensors?

Temperature sensors are a type of sensor which are specifically designed to measure the temperature of a person. The most common ways are to either use infrared waves to measure the temperature remotely or to take direct measurements from the skin when the sensor is worn. It should be noted that these are temperature sensors specifically designed for medical and fitness applications, as there are also a wide range of thermocouples, thermopiles and other temperature sensors out there which are used in industrial processes as they are more robust, can withstand high environmental temperatures and are highly stable. In many cases, the latter are often designed to sense humidity, but this is not a necessity for medical-based applications.

As far as flexible and wearable temperature sensors go, there are three common types of temperature sensor. These are pyroelectric detectors, resistive temperature detectors (RTDs), and thermistors. Of these, thermistors are the most used approach because they typically have a fast response time, a simple fabrication and a wide temperature sensing range. Thermistors use the thermo-resistive effect of the active sensing material, which can be anything from different polymers to a wide range of conductive nanomaterials (such as carbon nanotubes, silver nanowires and graphene). Such wearable sensors have been used in the medical space to provide real-time monitoring of a patient’s temperature when they have severe wounds, cardiovascular issues, and pulmonological issues, to name a few examples.

Researchers from Japan have now created a wearable temperature sensor made out of poly(3,4-ethylenedioxythiophene) polystyrene sulfonate (PEDOT:PSS). PEDOT:PSS has long been touted as a suitable material for flexible and wearable temperature sensors because it has beneficial mechanical properties that enable it to be flexed (and conform to the wearer), it has turntable electronic properties, and it can be fabricated and patterned in a number of ways (including being printed) with relative ease – making its utilisation on large-scales much more feasible than some other options. However, while they have shown promise, many of the PEDOT:PSS thermistor sensors constructed to date have poor humidity stabilities because PEDOT:PSS is a water-soluble polymer – which is a major issue when worn on the skin of patients, as the natural humidity of the skin and sweating at elevated body temperatures can cause them to destabilise and become inaccurate. This was a challenge that Shizuo Tokito and colleagues and Yamagata University set out to solve. 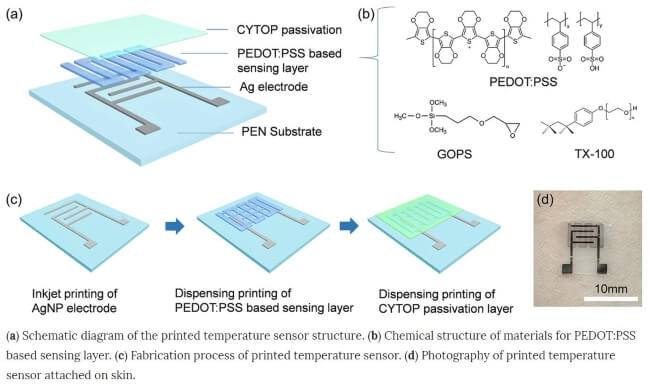 The researchers created their wireless and flexible PEDOT:PSS sensor fully by printing methods, making it a scalable method. To overcome the issues associated with using pure PEDOT:PSS materials, the researchers crosslinked PEDOT:PSS with (3-glycidyloxypropyl) trimethoxysilane (GOPS) and used this polymer as the active sensing material. Cross-linking is an important chemical process, as it makes the polymer rigid and prevents it from dissolving in a solvent (such as water found in sweat/a humid atmosphere).

Using an inkjet and a dispensing printer, the researchers were able to deposit each layer of the sensor on top of each other to create a complete device. The team first used a silver ink to print silver electrodes on the surface of a poly(ethylene-phthalate) (PEN) via inkjet printing, followed by the active PEDOT:PSS-GOPS active surface layer, and finally a passivation layer made up of CYTOP® using dispensing printing methods.

The individual sensors were then connected to a wireless platform. This platform consisted of a series of capacitors, resistors, a flexible circuit, an operational amplifier and a wireless Bluetooth Low Energy (BLE) module, all of which were connected using a screen-printed silver paste. The individual temperature sensors and a cell battery were connected to the platform using conductive epoxy, and the whole device was applied to human skin using a skin-compatible adhesive.

The addition of GOPS into the PEDOT:PSS polymer enabled the sensor to become unaffected by humidity and was tested in highly humid environments ranging from 30-80% relative humidity (%RH). It was also found to have a high sensing capacity in the 25-50 °C temperature region, making it ideal for medical use. By integrating a wireless platform into the sensor module, it enabled the sensor to be used for real-time body temperature monitoring, where the data can be obtained directly by the sensor and transmitted to a smartphone for analysis.

The sensor shows a lot of promise as it uses commercial polymers in its construction, it is fabricated using relatively simple printing methods, and it solves a problem seen with other sensors of its kind. Whether it makes it to clinical trials and/or medical settings remains to be seen, but wearable temperature sensors are out there for monitoring patients with severe illnesses, as well as those which are suffering from viral infections; and as medicine is always advancing, new technologies are making it to the medical sector all the time.