Smart sensors with Bluetooth interface are increasingly becoming cloud-enabled as part of the move towards more connectivity. The industrial internet of things (IIoT) relies on sensors to collect data from systems to enable the monitoring of movement, pressure, humidity and other characteristics that can be fed to the cloud for processing. Although there are many different ways to make this connection one of the easiest is Bluetooth Low Energy (BLE) technology.

The Switzerland headquartered international sensor manufacturer, Contrinex Sensor GMbH, recently announced the launch of several new series of BLE compatible devices to be made commercially available in 2020. The company described its cloud-capable smart sensors as “perfect for live data monitoring from the heart of an application.” By configuring an io-link parameter, sensor data is displayed in real-time. The BLE interface enables wireless remote configuration and the provision of status or diagnostic data in real-time on the smartphone. In addition to extended functionality (EDM, restart interlock, beam coding, etc.) and a higher degree of user-friendliness, users also benefit from reduced installation costs because safety relays are no longer required. The new sensors feature splatter-resistant coating as well as insensitivity to magnetic fields. The coating increases sensor life and makes cleaning easier, which helps reduce machine downtime.

ABB the Swiss-Swedish multinational corporation’s range of Ability™ smart sensors was recently selected by industrial coatings producer Transcontinental Advanced Coatings to help it reach its zero downtime goals. This follows a successful trial at the company’s Wrexham, UK plant. The ABB Ability™ smart sensor converts traditional motors into smart, wirelessly connected devices. It is attached to the frame of the motor so no wiring or machining is needed. Using algorithms, based on ABB’s decades of motor expertise, the ABB Ability™ smart sensor relays information about the motor's operation and health via a Bluetooth-gateway or smartphone to a secure server.

“Our overall goal is zero downtime,” says Dr. Keith Vidamour, Engineering Manager for the Transcontinental Advanced Coatings North Wales plant. “Conducting maintenance as needed rather than on a fixed schedule will help us improve reliability and process control.” The second phase of the project will use multiple smart sensors to remotely monitor the motors and bearings throughout a process, together with up to four Bluetooth gateways connecting with ABB’s secure server. Ultimately, the company will roll out the solution across its global platform.

In October, it was announced that Nordic Semiconductor’s multi-sensor IoT prototyping kit ‘Nordic Thingy: 91’ is now available at Rutronik UK. The kit is based on the NRF9160 SiP (system-in-package) and designed for IoT applications. It features the NRF52840 for short-range radio connection and a range of sensors and interfaces, designed for rapid prototyping and proof of concept. It is suitable for applications including logistics and asset tracking, metering, smart city, smart agriculture, wearables and medical, predictive maintenance and industry 4.0. The dedicated radio system supports LTE-M and NB-IoT technologies as well as GPS for positioning. For short-range applications, the ‘Nordic Thingy: 91’ contains the multiprotocol SoC (system-on-chip) NRF52840 with a range of protocols including Bluetooth 5 and NFC. A pre-loaded asset tracking application that uses many of the on-kit sensors as well as LTE-M and GPS offers out-of-the-box asset tracking and monitoring. The prototyping kit can, however, be reprogrammed with any dedicated application of the user’s choice. 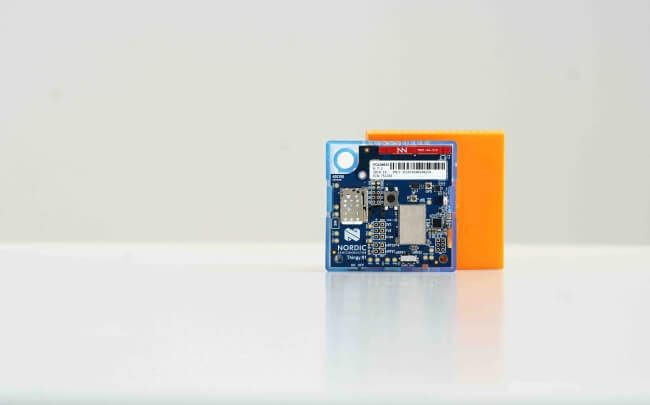 Also in October, the University of Aberdeen life sciences spin-off, Mime Technologies, was reported to have secured a six-figure investment to drive development of its “eyes in the skies” in-flight medical monitoring technology. The system integrates a library of Bluetooth, clinical-grade sensors to enable real-time monitoring of a patient’s vital signs. This allows the user to identify and track any deterioration or improvement in the patient’s condition. Chief executive and founder Anne Roberts said: “Although many carriers have voice support to doctors on the ground, it is often difficult for them to ‘review and recommend’ because of limited data.”