What is a Railgun? Four Things to Know about Railguns

Rail guns are devices that use electrical power instead of chemical power to propel projectiles over 100 miles at hypersonic speeds. The first practical rail guns are even now being evaluated by the US Navy to supplement more conventional naval artillery pieces. Unlike present-day artillery shells, railgun projectiles are just that – projectiles.

They contain no explosives, and the kinetic energy imparted by the projectile, travelling seven or so times the speed of sound, can rip through steel or concrete, destroying anything in its path.

How Do Rail Guns Work?

Rail guns rely on the reaction between magnetic fields and electrical current. 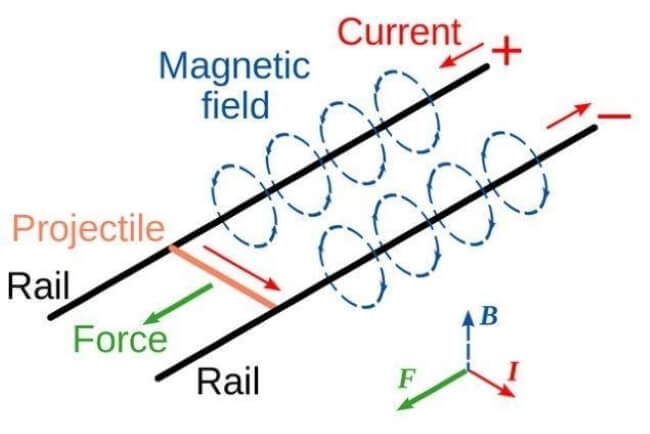 Simplified illustration of the operation of a rail gun. Image source: gcaptain

In the picture above, our “rails” are two bare copper wires connected to a DC current source, and our “projectile” is a copper wire, illustrated in orange, simply lying on top of the rails. This completes the electrical circuit, and electrical current, I, flows across the projectile.

Electricity flowing through rails generates the magnetic field, B, as illustrated in blue. The net magnetic field generated is perpendicular to the plane of the page.

As Lorentz’s law describes, the current through the projectile reacts with the magnetic field in the rails, creating Force F. The illustration on the lower right of the picture illustrates what’s called the right-hand rule. It demonstrates how the force will manifest itself – with current flowing across the rail and a magnetic field perpendicular to the rail’s plane, the projectile is forced outward along the rails, in a direction away from the current source.

If this all looks familiar, it should because these principles are similar to how some electric motors function.

How Do You Power A Railgun?

Don’t let the simplified explanation in the previous section fool you – a practical railgun is an enormously complex device requiring tremendous electrical power to operate.

Now, consider just how much power that is.

Unavoidable inefficiencies will mean that this is a very low estimate. In any case, that’s A LOT of Power. And it’s why many new US warships are provided with huge electrical power generation capabilities. 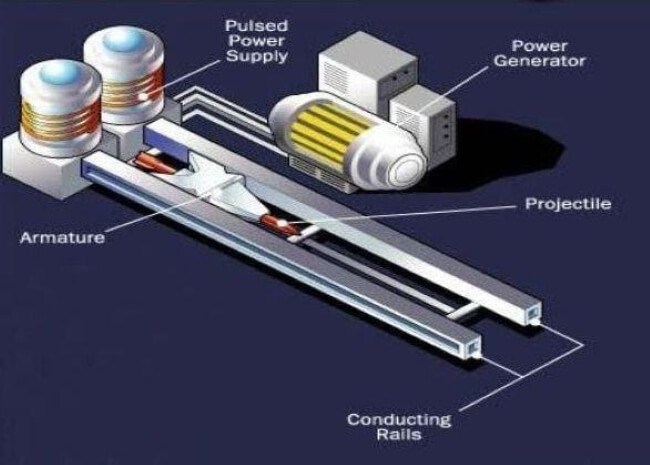 And, of course, the projectile won’t remain in the railgun for anything like 1/20 of a second.

It is estimated that the acceleration that the railgun must impart into the projectile will be in the order of an astonishing 30,000 times that of gravity.

So, here are some “back of the envelope” calculations and guestimate how long the projectile will take to travel through the railgun:

It has been estimated that for a practical military railgun, those 25 megajoules must be stored in about 10 seconds, and we have now estimated that that charge must be dispersed to the railgun over a period of about five thousandths of a second.

Supercapacitors might be just the vehicle by which this can be accomplished. A bank of supercapacitors might be charged up to the level of 25 megajoules in a few seconds. Then, they can deliver the tremendous amount of current required by the railgun, measured in millions of amps, for the infinitesimal periods of time needed to launch the projectile.

One of the greatest advantages of military railguns is the low cost of the projectiles. They carry no internal propellant, as they are propelled by electricity. They also need no explosive charge because the kinetic energy imparted by a projectile travelling at seven times the speed of sound is what does the damage.

Another advantage is safety. These projectiles contain no explosive propellant or explosive. A major risk is thereby eliminated. The devices under development today accelerate their projectiles with force, equivalent to an astonishing 30,000 times the force of gravity.

The projectiles will necessarily be precisely constructed, but they will cost a tiny fraction of the incoming enemy missiles that they will be used to destroy. Additionally, they have a range of over 100 miles, so they may eventually replace classical “gunpowder” accelerated artillery shells.

Further, in the future, it is speculated that railguns with far longer barrels will be employed to lift cargo into space. The exit speed will need to be far faster than what’s needed for terrestrial military purposes, but because of the longer barrels, the accelerations required will be less. These accelerations will still be far greater than a human can endure but not too much for construction material.

And, if we are allowed to dream just a bit, carbon waste, water, and seeds can be propelled into space, and unlimited solar energy will do the rest, ushering in space-based agriculture during the lifetime of some of our younger readers.