How Laser Weapons Technology will Change the Military

A new arms race has been brewing for some time between NATO, Russia and China.

Hypersonics, railguns and lasers have been among the top prizes. After decades of research and development - not to mention billions in spending - the three technologies are starting to reach fruition.

Russia made history at the end of 2019 by being the first nation to successfully test a hypersonic missile.

It was the modern day equivalent of the United States testing the first nuclear bomb on a quiet summer’s day in 1945. The world suddenly sat up and took notice.

Railgun technology is at the stage where the likes of the US Navy are evaluating the feasibility of mounting such weapons on warships.

The major drawback is the prodigious amount of power such a weapon requires to fire and - therefore - how effective such a weapon could be in a combat situation.

Nevertheless, railgun technology has the potential to be devastating. A projectile moving at seven times the speed of sound makes a mess.

So do hypersonic missiles.

Lasers, on the other hand, don’t.

Our obsession with lasers

Some of the earliest science fiction stories featured ‘spacemen’ armed with laser based weapons.

Indeed popular science fiction franchises like Star Wars, Star Trek, Babylon 5 and others all popularised the idea that soldiers of the future (or from a long time ago in a galaxy far far away) would be armed with laser-based weapons.

Imagine the collective disappointment when we discovered that laser weapons in the real world didn’t fire zipping laser bolts of shimmering phaser beams.

Rather just a tiny point of light that seems to cause things to spontaneously burst into flames.

Regardless, it hasn’t stopped researchers spending decades trying to perfect the technology.

And with good reason. Despite the lack of special effects, laser weapons are a highly effective, low-cost alternative to almost any conventional weapon.

In addition to being - well - laser accurate, they don’t have the problems with heavy or volatile ammunition. In fact, there isn’t any ammunition at all.

The problem with lasers is the photons start to disperse once ‘fired’ which means the laser emitter gets bigger in relation to the distance and/or intensity you require. Although this isn’t too dissimilar from conventional weapons. 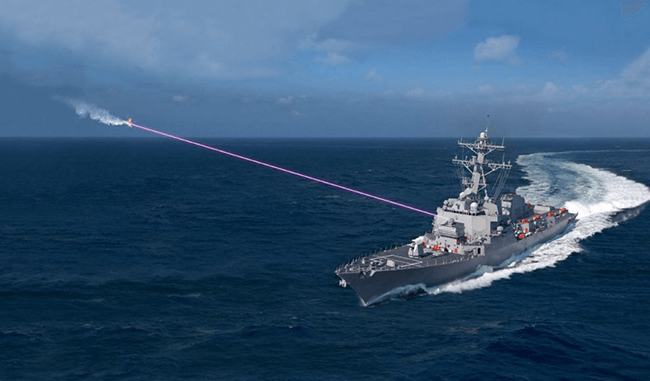 In a nutshell, it uses artificial intelligence to focus fiber lasers into a single more powerful beam. This increases its effectiveness while keeping the equipment small.

After all, the basic technology behind lasers hasn’t changed - energy travels along mirrors and lasers. So keeping the technology as compact as possible is vital if we ever want a man-portable laser weapon.

The result is a small, powerful laser weapon that can target and hit an enemy with lethal precision in the blink of an eye. All of a sudden hypersonics aren’t quite as scary as they were before.

Shooting down enemy drones with missiles with a £100,000 price tag is an expensive way of doing business. A laser is quite literally point and shoot. All it costs you is the price of some energy.

Plus, if you miss you just move the laser until you hit the target. No crossfire hitting friendly assets or civilians. No bullets or missiles disappearing into the distance to hit who-knows-what.

Providing the battery holds, soldiers, ships, planes and tanks can stay in the fight for as long as they need to. There’s no ammunition to run out of.

There’s also no danger of ammunition detonated or cooking off as the result of a lucky hit from incoming fire.

Considering the advances in modern battery technology lasers may actually be a reality sooner than we think. Especially if recent breakthroughs in solid state batteries prove as powerful as early test promise.

Instead of a soldier carrying half a dozen magazines with around 30 bullets each, they could carry a similar number of batteries capable of dispensing enough energy to fire thousands of shots.

Depending on the power output required, a ‘magazine’ battery could be replaced with a backpack sized unit. Or for support sized lasers, batteries would be carried as part of a two man team.

Much like the way laser guns (or lasguns) work in the Warhammer 40,000 Universe. Although, again, without the cool laser bolts zipping about unfortunately. 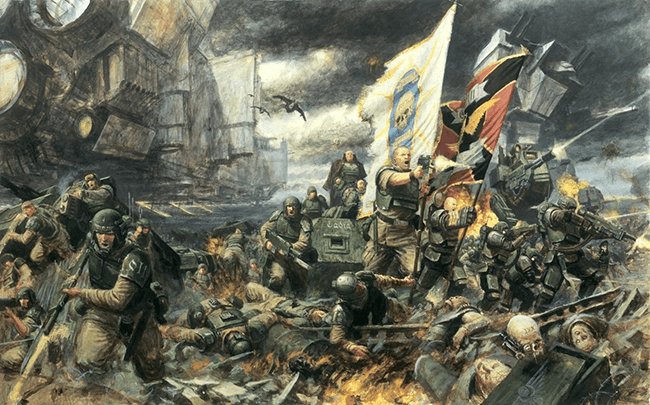 We’re a few years away from futuristic, laser armed soldiers storming across the surfaces of alien worlds. However, Lockheed Martin is carrying out field tests for the ship-mounted ATHENA system.

Intended for ‘low-value’ threats, it is designed to track and destroy targets such as drones or small attack craft. Check out the video below:

How Lasers will change Warfare

The introduction of lasers will - in some ways - simplify war. The mind boggling array of guns, bombs, missiles, bullets and rockets will be replaced with lasers.

They’ll look different of course, depending on who makes them. Some will be bigger than others, be more powerful than others and no doubt be more effective in the field.

However, one laser will be much like another. And be just as capable of wounding or killing the enemy too.

Although here in lies a crucial difference between laser and conventional weapons. Lasers are precision weapons of war. They don’t cause indiscriminate damage, they cause deliberate and considered damage.

Rather than a conventional airstrike that blows up a car (and the road under it) to take a single target, a laser just hits the target.

Similarly, rather than sinking a ship, you can target the engines. Or disable the guns.

Hits on infantry still have the potential to kill but wounds will be cauterised which means non-life threatening wounds stay that way.

All this adds up to a much cleaner, safer way of waging war with far less political fallout. Cities won’t be reduced to rubble and civilians won’t be killed in missile strikes or caught in crossfire.

This makes it far easier for countries to rebuild and repair diplomatic relations.

Despite Obi-wan Kenobi’s claim that (laser) blasters are so uncivilised, compared to where we are, they are a huge leap forward.

If the technology can be perfected and made man-portable then we could be about to take another leap forward into turning Star Trek into reality.