EDF Restricts Nuclear Power in France as Rivers Are Too Darn Hot!

Why do nuclear reactors struggle to react to sudden changes in power demand?

When it comes to renewable energy, many seems to be looking towards solar and wind as these power sources are arguably the most environmentally friendly. Compared to nuclear reactors, they don’t produce highly radioactive waste products that need to be buried for thousands of years in concrete and steel cases, and they lack the need for biological shielding in the event of an accident. Finally, nuclear energy comes with all sorts of fear and hatred from numerous portions of society which often makes it unpopular.

But as nice as solar and wind energy are, they suffer from a serious issue; consistency. Unlike a nuclear reactor which can output a guaranteed amount of energy for extremely long periods of time, solar and wind power sources generate energy as soon as its available, and there are no viable options for storing excess energy (batteries are one technology being explored, but are currently in the developmental stages).

As such, solar panels and wind turbines are only great if its sunny and/or windy and there is a demand for that power. However, it is generally expected that there will be some degree of wind and/or sunlight for any given day which means that energy will often be available, but not enough to totally rely on. Therefore, nuclear power can provide the bulk of energy while solar and wind can top this energy off to react to sudden changes in demand.

But why is nuclear energy unable to react to sudden changes?

As such, nuclear reactors operate at a specific energy output and rarely deviate. If more power is needed, this demand will be shifted to other power sources such as renewables or gas power plants that can rapidly respond to such changes.

Why are nuclear reactors sensitive to river temperatures?

Before we explore how nuclear reactors use rivers to cool down, it should be stated that numerous nuclear technologies exist. As such, this article does not consider all reactors, and not all reactors operate the same way. Some may not have large cooling towers while others may solely use sea water for cooling.

Cooling systems in nuclear reactors is an essential component to ensuring safe operation, but the highly radioactive nature of reactors means that numerous isolation systems have to be deployed. To keep radioactive compounds inside a nuclear reactor, the reactor uses a closed-loop system that never allows the coolant to come into contact with anything outside of the reactor.

A second closed-loop system is used to extract heat from the first closed loop system via heat exchangers and generate steam that turns turbines. Cooling down the secondary system is then done with a third cooling system that itself is exposed to the environment. This third cooling system draws water from natural sources (such as rivers), and after this water has been heated by the secondary cooling system, it is sprayed inside a large cooling tower whereby cool air is drawn in. Evaporation causes excess vapour to rise while cooling down the remaining water drops as they fall, and these water droplets are captured in a basin that can be used again. 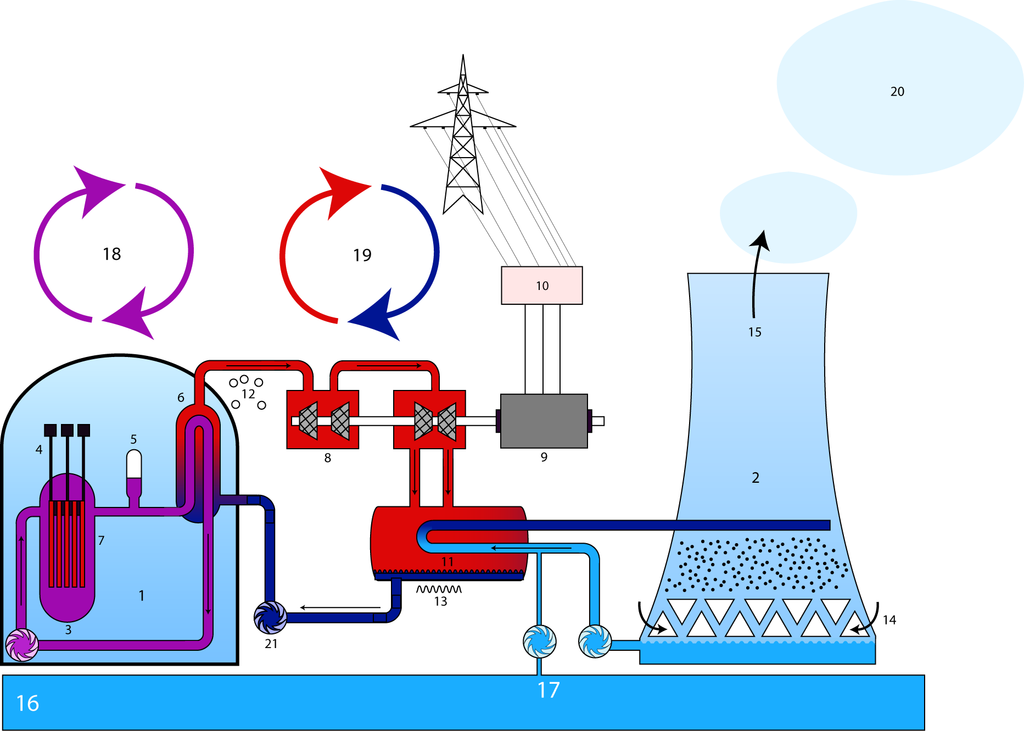 If the collected water becomes too hot, it can be discharged into rivers and seas, but doing so can cause environmental challenges as EDF recently noted after they announced that it will be reducing the power output from numerous nuclear reactors in France due to heatwaves.

Specifically, the increase in ambient temperatures (exceeding 40C) has resulted in rivers becoming warmer, and dumping warm water back into rivers has the potential to affect local wildlife. As aquatic life is highly sensitive to water temperatures, warmer waters can see wildlife die off, invasive species grow out of control, and disrupt food chains.

While heatwaves are themselves rare, climate change could see their frequency increase, and this may introduce difficulties for nuclear reactor site operators. Nuclear reactors are not designed to be power cycled, but multiple heatwaves will see these sites having to frequently change their output power.

One option for nuclear sites is to integrate long underground tunnels for warm water discharging that naturally cool down before rejoining a river or sea. However, the installation costs for such a tunnel can be expensive, and any blockage to such a tunnel could be potentially catastrophic.

Another option is for nuclear reactors to consider the use of artificial above ground canals that transport waste water directly into the sea which is far more capable of accepting warm water. However, this also introduces logistical challenges, and those living near a canal may not be happy with the idea of a nuclear discharge canal near them.

Overall, nuclear sites will have to come up with a solution to future heatwaves because cycling a nuclear site is not good for safety, and dumping hot water into rivers will be sure to affect wildlife.