Recently, researchers have developed a new flexible LED that combines the best inorganic and organic LEDs. What challenges do flexible display technologies face, what did the team develop, and could it be the solution to future mass-produced flexible displays?

What challenges do flexible LEDs present?

As electronics continue to advance, one field, in particular, continues to present electronics with a multitude of challenges; wearable electronics. While wearable devices such as smartwatches and sunglasses with in-built headphones exist, they are far from truly wearable devices. Such devices are always ridged in construction, uncomfortable, and unnatural.

Truly wearable electronics would be akin to smart clothing; electronics integrated into clothing fibres that go unnoticed but provide the user with smart capabilities. However, creating such electronics is an extremely difficult task as most electronics are solid in nature and rarely have the ability to bend.

To better understand why this is the case, it’s best to look at a typical example that, if solved, would have a major impact on the development of wearable technologies. LEDs are a fascinating invention as they have allowed for bright displays to be constructed with high pixel densities and good contrast properties. However, standard LEDs are built using inorganic crystalline structures that do not like to be bent and therefore cannot be flexible. Alternatively, organic LEDs are built using organic compounds, which can be used to make flexible displays. However, organic LEDs have their own challenges, including their short lifespan and low performance.

An ideal flexible LED would combine the best properties of both inorganic and organic LEDs, whereby it would have decent performance but allow for flexibility. Furthermore, the same LED would have to be easily mass-producible to make large screens practical. Thus, a team of researchers from Washington University have recently demonstrated a new type of LED, called a PeLED, that has decent flexibility, good performance, and is easily mass-produced.

To produce the new LEDs, the team started off with an organometal halide perovskite crystalline structure typically made by spin coating the liquid crystalline solution onto a substrate. However, the team instead explored the use of inkjet printers to carefully control the amount of liquid being deposited to a substrate. This method for construction saves significant amounts of material and allows for constructing LED structures to an exact specification in shape, size, and position.

Using an inkjet printer also enables the construction of LEDs on more unusual structures that otherwise cannot be spin-coated (such as rubber and some plastics). But, perovskite is not a flexible material, so even though the inkjet method allows for fast and accurate LED production, it is still ridged.

As such, the researchers then turned their attention to creating flexible perovskite LEDs. To achieve this, the researchers integrated the inorganic crystalline structures into flexible organic polymer structures. The researchers’ last challenge was finding a way of creating such structures while in liquid form without different layers mixing. The solution came from a polymer that creates a barrier between the various layers, and the resulting polymer enabled the creation of fully flexible LEDs. 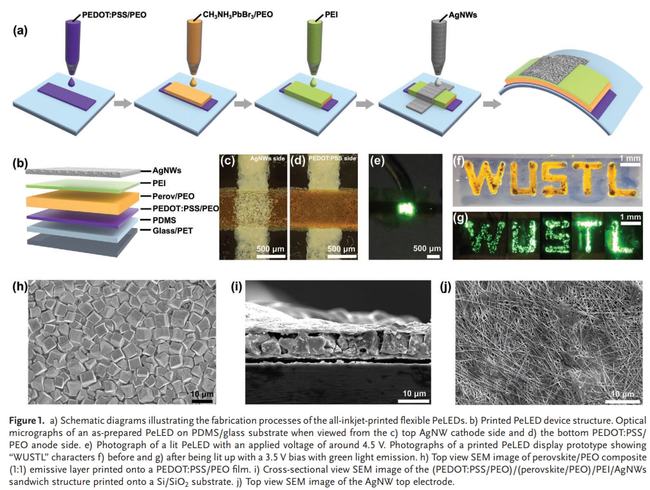 Could this be the solution to mass-produced flexible LEDs?

Research papers are a dime a dozen, and the overwhelming majority of “breakthroughs” typically fizzle down to nothing. However, the researchers have demonstrated an extremely strong candidate for future flexible displays for three main reasons.

The first is that the team has submitted a patent for their display technology, which is costly and involved. Therefore, such a patent would only be filed if there was an economic possibility of the resulting research.

The second is that the team have demonstrated a truly flexible LED technology. While these have been developed previously (such as OLEDs), the use of inorganic crystalline structures pushes LED technology into the realm of practicality, reliability, and decent performance. Furthermore, the researchers have already demonstrated the LEDs working on a flexible substrate.

The third, and arguably the most important reason, is that the LEDs were constructed using inkjet. Such a process is perfect for mass production as it allows for entire structures to be printed in minutes compared to other construction methods that can take hours. In the case of the researchers, they were able to print their LEDs in 25 minutes, whereas other methods would take many hours.

Overall, the researchers have developed a true feat of engineering and ingenuity that could see true flexible displays become a commercial realisation.