Researchers from Germany and Spain have recently developed a graphene-based device that can modify its electrical and optical properties using a gate voltage. Why is graphene special, what did the researchers demonstrate, and how could it be used in future electronics?

Why is graphene special?

Graphene is commonly stated to be the future material, and unlike many other materials, graphene rightfully deserves this statement. While graphene is still a relatively new material in its infancy, it offers substantial benefits when applied to almost any application.

Graphene is a single layer of graphite (i.e. monolayer) with a hexagonal pattern (similar to honeycombs). Each unit of the crystalline structure is comprised of two carbon atoms, and each carbon atom is bound to three other carbon atoms.

To start, the structure of graphene makes it the strongest material is currently known to man being over 200 times stronger than steel (more than diamond). So while human standards would easily break a single layer of graphene, a cable made of pure graphene layers would have the ability to withstand forces no other material on earth could face.

Graphene boasts extremely high electron mobility (many orders of magnitude greater than silicon) that enables graphene to be highly conductive. However, conductivity in graphene is somewhat different to standard materials as quantum effects play an important role. For example, researchers have observed special cases where graphene exhibits specific fixed resistances. The high conductivity of graphene also corresponds to its high thermal conductivity.

Graphene has the ability to conduct large amounts of current efficiently, and the speed at which graphene can operate is many orders of magnitude greater than devices produced today. It is these reasons that are seeing researchers trying to develop graphene-based electronics.

Recently, researchers from Germany and Spain released a research paper describing how they could create a transistor-like device using graphene. The device uses a control voltage (similar to a gate), to adjust the electrical and optical properties of graphene. By using careful control over the gate, the device can be made to control the resulting output frequency of current and light.

Standard graphene is already known to be able to affect the frequency of light that passes through it (or electrical current through the structure), and this effect is a result of Dirac cones.

Simply put, all materials have valance and conduction bands, and semiconductors have a gap between these bands while the bands in metal are joining. For a semiconductor to be conductive, electrons need to be given enough energy to leave the valence band and “jump” into the conductive band. However, Graphene is a special material whereby the valance and conduction band contact each other at unique points. If drawn on a 3D map, the contact points take the shape of a cone, and it is these small contacts that give electrons crossing this area unique quantum effects and behave like massless particles.

The researchers developed the device in electrical currents (or light waves) and effectively increased the frequency by several orders of magnitude. This allows for the devices to work effectively as frequency multipliers. In addition, their ability to operate and control signals in the terahertz shows promise that graphene devices could be used to create electronics that can operate at ultra-high frequencies. 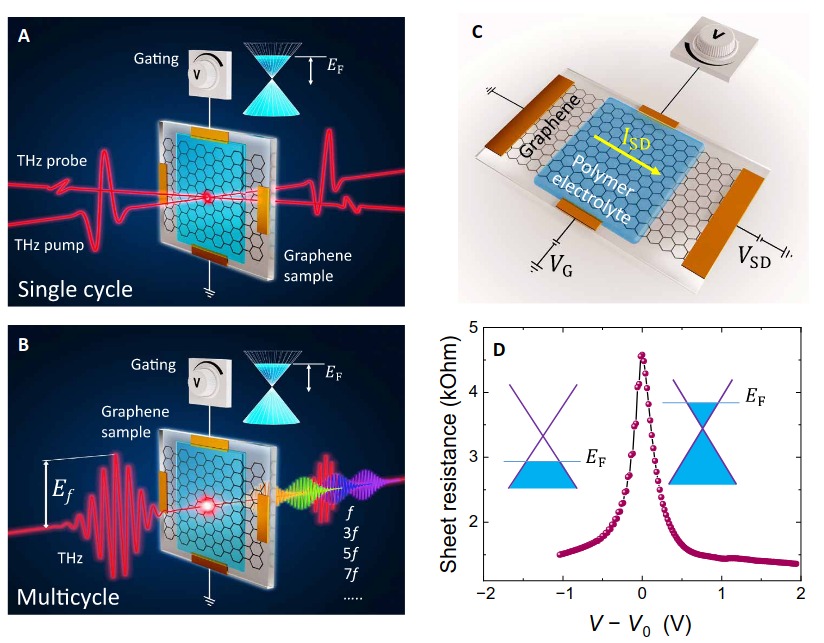 Could graphene be the future semiconductor?

Of course, graphene as a future material extends far beyond electronic switching circuits; it is a candidate for battery and energy storage, can be used to efficiently remove heat from devices, and provide entrapment of entangled particles. From the desktop PC to the quantum computer, graphene is most likely to become the material that will power the world of tomorrow.

Four Things to Know about Railguns

Demand for Automotive FCEVs Moves up a Gear

Will this number-generation innovation hack off the hackers?