Researchers from Iowa have demonstrated a low-cost food safety sensor using graphene. What current research exists around food sensors, and how will they change the food industry?

It is truly amazing to see how far electronics have come in the past 100 years. The first simple circuits provided instant communication with the introduction of the telegraph, while the introduction of the vacuum tube would provide houses with a radio for the reception of world-wide news. Now, almost all aspects of life are governed by electronics with the use of microcontrollers and microprocessors. The food industry is no exception to this integration of electronics; electronics are playing an increasingly important role in ensuring freshness and safety of food. One example of where electronics plays a major role is eggs; each egg sold in major supermarkets undergoes rigorous testing to ensure that it is fresh and capable of being shipped. Such steps include microfracture identification, stamping, sizing, and UV cleaning. The use of sensors in the food industry is also entering the logistic industry whereby asset tracking allows for the journey of a consumable to be monitored from start to finish. This can help manufacturers and distributors understand why a particular batch of food has failed, or pay different rates depending on the freshness of the batch.

However, one area that food sensor technology would truly revolutionise is the detection of allergens. While food allergy deaths are incredibly low (10 per year in the UK), allergies affect an estimated 2 million people in the UK. While some allergies can be mild, some can be more server requiring the individual to carry an epi-pen in the event that they come into contact with an allergen. This problem is made worse when food laws in the UK don’t require the statement of all ingredients if the food is made fresh in-store (such as the pret-a-manager case). Furthermore, food sensor technology can also help with detection of spoiled food that may lead to food poisoning if consumed (up to 500 per year in the UK).

Last week, a team of researchers from Iowa have demonstrated their food sensor that is able to detect allergens and spoiled food. The sensor utilises graphene, a single layer of a hexagonal carbon structure, that is printed onto a flexible polymer substrate. The ability to print fine-resolution electrodes was achieved using an aerosol-jet printing technology with the resulting electrodes being both biologically inert and capable of operating as electrochemical sensors. But how did the team get the sensor to detect histamine, a common allergen? 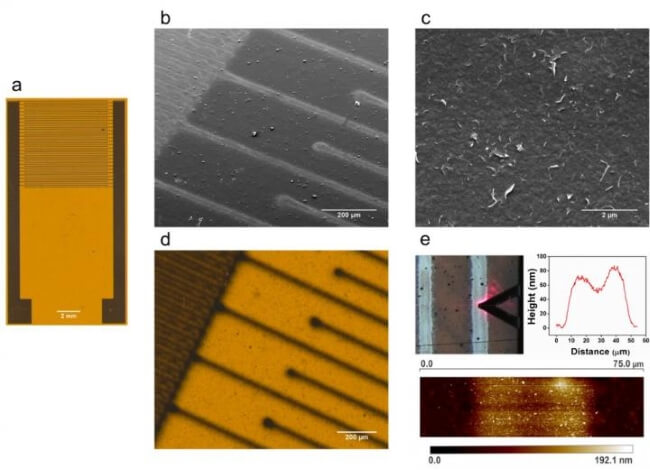 Researchers are using aerosol-jet-printing technology to create these graphene biosensors that can detect histamine, an allergen and indicator of spoiled fish and meat.

The electrodes themselves are unable to detect compounds as they merely conduct electricity. However, if the electrode is bonded to electro-chemical receptors, then the conductivity of the electrode will change when the receptors come into contact with the molecule they bind with. In this case, the scientists used histamine receptors that bind to histamine, which itself it blocks electron transfer. Testing the device was done by dipping the histamine detector into a spoiled tuna broth. The resulting detection of histamine (via the change in the electrical conduction of the electrodes), indicated that the food was spoiled, and the results from this experiment indicate that the sensor is able to detect histamine down to 3.41 parts per million.

While the creation of a sensor that can detect histamine in its own right is an achievement, the team have developed a sensor that can be produced cheaply. The use of common printing technology to create sensors means that they can be easily mass-produced to be used in either single-use systems (such as self-test kits) or as a sensor permanently embedded into a container. Such a system could also reduce waste as food would stop being judged by its date, and instead by its sensor reading.