Recently, Infineon announced the release of a Raspberry Pi kit that includes the OPTIGA Trust M controller for heightened security. What challenges do smart homes face, how will security hardware play a key role in protecting devices, and what does the new kit include?

What challenges do smart homes face?

Smart home technology has the ability to transform the home by providing intelligent services and control significantly. Utilising key technologies such as artificial intelligence, IoT, and edge computation, many aspects of the home can be automated. At the same time, connectivity can allow for remote monitoring for comfort, energy, and security reasons. For example, a smart home could allow an owner to dynamically adjust the temperature throughout the day to save energy when unoccupied as well as adjust climate controls for when people return to the home. At the same time, attempted intrusions into the home can be detected by multiple devices and inform both the homeowner and local authorities to ensure the safety of any occupants and property.

However, for a home to be truly smart requires a large collection of different devices all working together. Still, the sheer number of companies and solutions on the market while all following their own protocols and systems means that the industry is very disjointed. A smart camera from company A will most likely not work with a security suite from company B, while a doorbell from company C utilises Bluetooth instead of Wi-Fi. Smart home technologies also suffer from trust and security; history with devices being insecure has led to a growing distrust in devices that have the capability to monitor individuals. Thus, the next generation of smart homes needs to be able to work together on a common platform while also having strong security measures to earn trust in its users.

Recognising these issues, Infineon has released a new Raspberry Pi security kit aimed at helping with the development of smart homes. The new kit, which does not include the Pi itself, provides developers with a secure shield utilising their OPTIGA Trust M security solution for the creation of a strong, secure IoT platform. The OPTIGA Trust M series of security ICs is a high-end security IC that provides a host of features including unique identities, turnkey solutions for ECC NIST P256/P384, SHA-256, TRNG, DRNG, and RSA® 1024/2048, cryptographic toolbox, I2C interface with shielded connections, a device security monitor, and CC EAL6+ certification. The OPTIGA Trust M series allows for a range of different security applications including authentication, secured communication, IP protection, secured updates, and brand protection, all of which is critical in the development of a product where security is paramount. 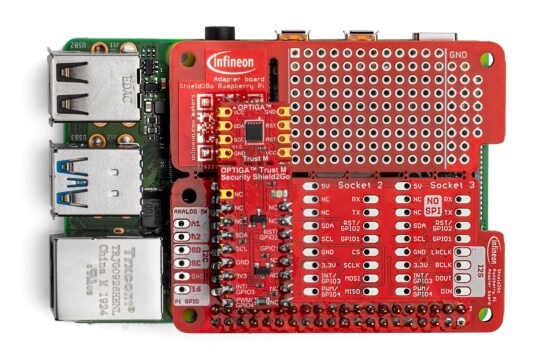 While security measures can be applied in software as well as in the design (i.e. not utilising default passwords or allow for security reset systems), software applied security can only go so far. For example, CPUs fundamentally have no idea how to distinguish authorised code from non-authorised code. Thus attackers can exploit this to either inject code into applications during runtime or install themselves into a bootloader, so their code executes on start-up. Software security systems can also be hacked and altered to the favour of the attacker (such as injecting basic keys or bypassing security checks entirely), which leaves software-based security systems potentially vulnerable.

Hardware security, however, is any security solution designed into silicon itself, making it effectively immutable. For example, hardware cryptographic engines are not only faster than their software counterparts, but they cannot be hacked by software (i.e. by making the encryption process easy to reverse or skip altogether). Another example of hardware security would be unique identifiers to a chip that are set at the foundry, which is then encrypted. This allows for each device to have a unique ID that cannot be altered, and this can allow for designs to carry digital passports, unique authentication, and tracking. As hardware-based security can provide a design with accelerated secure functions, hardware security is becoming increasingly popular in modern designs, and as these devices become cheaper, the next generation of smart home and IoT devices will also see large-scale use of hardware security.

Gadget mania and the electronic fagsters. What’s the connection?