Drone technology and 5G – How the two will help each other

Drones are unmanned vehicles that can be used in military, scientific, and commercial applications. While most think of drones as being quadcopters, a drone can be any unmanned vehicle including self-driving cars, boats, or gliders. While privately-owned drones are a recent invention, the concept of drones goes back to the first world war whereby unmanned planes would carry bombs in the form of an aerial torpedo. Today, drones make up a vital military tool but are quickly finding themselves practical in other applications thanks to the improvements in technology. 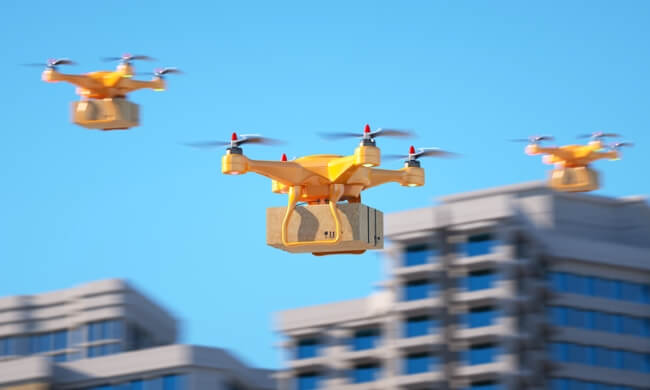 What technologies do drones rely on?

Drone technology is dependent on a wide range of technologies, including power storage, wireless communication, sensory systems, and even AI. Power storage is the one technology that disproportionately affects flying vehicles as these have to carry their energy source with them while needing to be as light as possible (wheeled vehicles, for example, can easily be made increasingly heavy with little performance impact). While RC planes have existed for several decades, the introduction of Lithium-ion batteries has helped to increase flight time, while decreasing the overall weight dramatically.

Wireless communication is another crucial technology, as most drones are expected to be operated remotely. Suppose the drone is expected to travel beyond the visual range of the operator. In that case, the communication system should be able to operate at a great distance, and this can be tricky with low power transmitters. Using a high power transmitter has its issues as many radio bands are licensed, and the use of unencrypted radio communication can result in either interference or hacking. Long-distance radio communications often rely on longer wavelengths, and these can require larger antennas to work correctly.

Sensory systems are a critical component to practical drones as operators need to be able to view the surrounding environment. The first sensory device often put into a drone is a camera, and the past two decades of semiconductor improvements now sees high-quality camera sensors at competitive prices. Other sensory systems that have helped to improve performance dramatically include accelerometers, which allow for real-time readings on acceleration in difference axis, and gyroscopes, which are critical in keeping a drone properly balanced (again, this is more important for flying vehicles as opposed to wheeled vehicles).

AI is increasingly becoming an essential technology in drone systems as AI can be used to perform a whole range of autonomous tasks. For example, an AI-powered drone can map its surroundings and navigate to a point without the need for intervention. AI can be used to read data from cameras and LiDAR systems to avoid objects when they are detected and even be able to recognise specific objects. This allows a drone not only to know where objects are, but know what they are, and make determinations if those objects pose any secondary problems (e.g. unstable ground).

What Does 5G Mean for Drones?

To understand what 5G means for drones, we first need to understand how drone usage is changing. Traditional drones (such as those used by the military) often use dedicated radio communications that either utilises satellites, or large mobile antenna systems. Modern drones, such as those being used in drone delivery systems, may be required to travel great distances, and operate in a network with potentially thousands of other drones. On top of that, these 5G connected drones will most likely be reliant on AI algorithms to avoid objects, recognise other drones, and identify landing zones. Assuming that such drones will be reliant on cloud computing to perform AI computational tasks, a reliable internet connection is needed. While 4G networks do offer decent download and upload speeds, 4G networks are not geared to handle thousands of devices simultaneously while supporting high-speed downloads, and low latency.

This is where 5G steps up to the plate and may be the future network that supports the use of drones in commercial applications. When compared to 4G, 5G offers greater speeds (up to 10Gbps), lower latency (as low as 1ms compared to 50ms from 4G), and a broader range of frequencies which allows for supporting more devices while lowering interference from other channels. However, the most important aspect of 5G in drone technology is the ability for devices to move across cells without the need for long and complicated reconnection protocols. This means that a drone flying to a distant location won’t have to halt every time it crosses into a new network area covered by a different mast. Such networks will also be widespread, thus allowing  5G drones to always be connected. This enables remote operators to monitor drone data in real-time easily, while not requiring to be present at a specific control centre; any internet connection allows for access to the drone network.

Renesas Will use RISC-V Cores in their ASSPs