Elon Musk announced that self-driving tesla cars might be ready by the end of the year. What features do self-driving vehicles need, why does AI play an important role, and what problems can self-driving cars face?

Self-driving cars have been the stuff of science fiction since the invention of the automobile. Now that modern technology allows for cars to process image data, recognise objects, and even detect obstacles in the road, the possibility of self-driving vehicles has never been closer to reality. Last week Elon Musk, founder of Tesla, announced that their cars may have self-driving capabilities by the end of the year. Currently, Tesla deploys level-2 self-driving into their vehicles which control the car but requires the user to be alert with their hands on the wheel if the system misidentifies vehicles, pedestrians, or objects on the road. The proposed upgrade would introduce a level-five self-driving system making the car entirely autonomous, and would not require any upgrade to the hardware. So, what technologies do an automotive system require to be self-driving, and what are the implications of such a system? 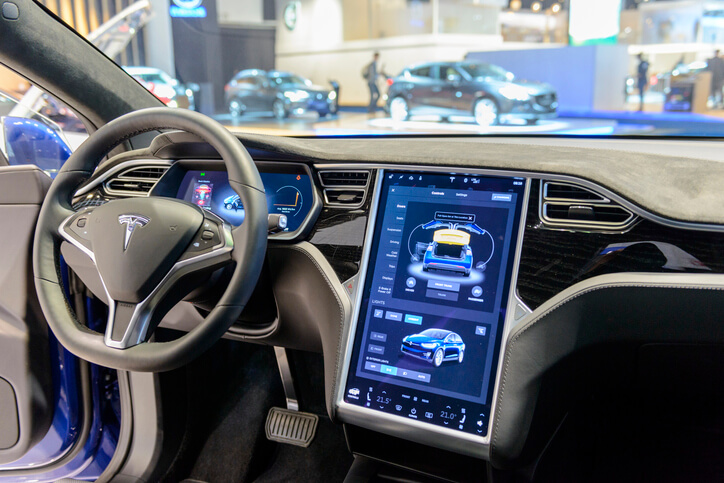 The first step into creating a safe, self-driving system is to deploy as many sensors as possible around the car that allow it to see its immediate environment. While several cameras can provide visual data, processing this data for depth and object recognition can be a difficult task which is why self-driving cars often incorporate RADAR, LiDAR, and ultrasonic SONAR. These technologies allow for vehicles to quickly make measurements on nearby objects without needing to know what those objects are; the only rule the car needs to follow is don't bump into those objects. Self-driving cars will most likely integrate mobile communications utilising 5G due to its low-latency and high speed, which can provide AI updates to the vehicle while also providing the car with live information regarding traffic and dangers. Short wave radio technologies such as Bluetooth can be useful in identifying nearby cars also deploying self-driving systems that can negotiate with each other. If one suddenly stops due to a traffic collision, all other self-driving cars can run emergency measures to come to a halt safely.

How is AI used?

Sensors are great for providing information about the surrounding environment, but unless that data is processed into something useful, then a self-driving car is impossible. Creating a self-driving car utilising discrete logic and a few lines of code can never work due to the variability in the environment. For example, a pedestrian crossing the road could be all shapes and sizes, wear different clothes, and be in a group of people or by themselves. AI systems, however, work using weighted functions and neural nets, meaning they can learn from experience. This means that instead of looking for precise images of a particular person, AI looks for objects that look similar to images of people previously seen. With enough images and training, AI can very accurately detect objects in images and identify what they are. This can be taken further than just recognition of pedestrians; traffic lights, signposts, and lane diversion. Any self-driving system of the future will be heavily dependent on AI, and this AI system will operate on the edge instead of the cloud to keep latency down.

The Implications of Tesla's Self-Driving Cars

One of the biggest concerns with self-driving cars is their ability to operate safely. Under ideal conditions, a driver would have their hands on the wheel and be fully alert while a self-driving system is in operation. However, the reality is far from ideal, and drivers using self-driving systems will almost definitely be trying to eat their lunch as the vehicle changes lane while topping 70mph. Such a scenario is not impossible to imagine, and several incidences with Tesla cars performing fatal manoeuvres give experts reasons to doubt the ability of AI systems. However, no system can be made flawless, and an effective AI system will still have moments of failure, but if the failure rate of AI systems results in fewer deaths then deploying it would be moral. Cars getting damaged is not important; saving lives is what counts, which is why cars are designed to crumple and be scrapped in even the smallest collisions.

What is Additive Manufacturing?