What are memristors, and what role may they play in AI systems?

Memristors are a special component that many would argue still does not exist, but some experimental devices show promise. What is a memristor, and how will they help artificial intelligence (AI) systems operate more efficiently?

What is a Memristor?

A memristor is an electrical component whose resistance is dependent on the previous charge that flowed through it. The name itself is a portmanteau of memory and resistor. Memristors have a polarity, and if current flows in one direction, then its resistance will fall, and if the current is reversed, then the resistance will increase. A memristor is considered to be the missing link between charge and magnetic flux, and is one of the four fundamental components; the other three being the resistor, inductor, and capacitor. 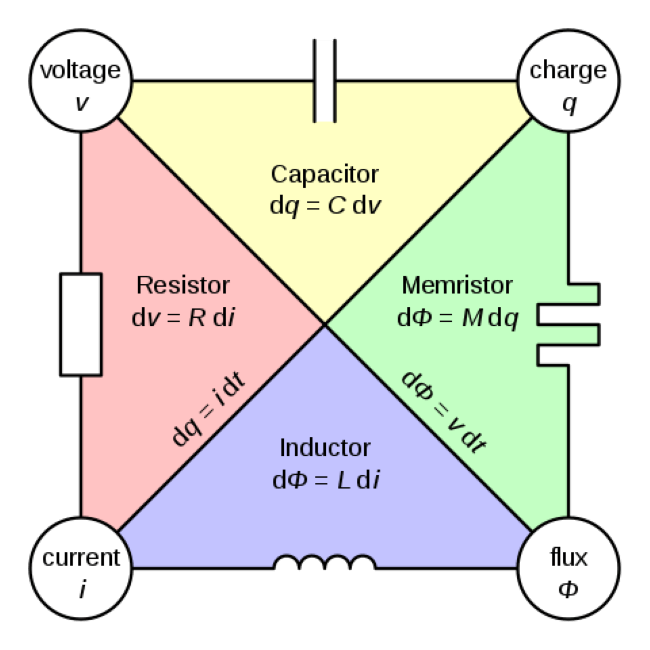 Do Memristors Exist Yet?

This is a difficult question to ask, and you will get different answers depending on whom you ask whether memristors exist or not. Devices that behave like memristors do exist, but these are active components. This means that they incorporate an amplifier (i.e. a transistor), to exhibit their property, while a true memristor would be a passive device (i.e. require no external power to operate). Thus, whenever reports come out of practical memristors being used, it is more than likely an active memristor or a passive memristor which exhibits limitations.

What Applications do Memristors have?

But what does a memristor do? One of the most prominent applications for memristors would be for use in memory. A true memristor remembers its resistance even when power is no longer present. Thus, a memory chip that utilises memristors as storage elements would not only be non-volatile but would have large capacities due to the use of a single memristor per bit. Memristors also have the bonus of being much faster to operate than capacitors; HP Labs was able to produce a memristor bit that operated at speeds of 1ns (~ 1GHz), while only being 3 x 3 nm in size. It has also been proposed that the superior memory density of memristor technology could see 1cm2 of silicon space holding 100 gigabits of information, and a 3D silicon structure of 1,000 layers would have one petabit of total storage. Such a system could effectively remove the need for cache, RAM, and a hard drive in favour of a single, unified memory.

Another application that memristors could be highly advantageous in are neural nets, and this is due to the similarities between memristors and neural networks. AI systems are generally based on neural nets which consist of nodes connected using weighted connections. As a net is trained to specific stimuli (such as an image of a car), these nets are adjusted, and eventually, the neural net will recognise not just the original car, but images that contain cars in general. This is a near-identical way to how neurons in the brain operate; neurons send impulses to other neurons, and the more a neuron is used, the more reliable the connection. The act of learning strengthens these neurons, and thus similar stimuli will activate the same neurons and connections.

Memristors behave in a similar way to the connections between neurons; the more they are used, the strong their connection becomes (or at least, the smaller the resistance). Thus, memristors could be used in between functional units to provide an AI system with analogue weighted connections. One significant advantage of using analogue devices over digital is their speed of operation; an AI neural network made up of memristors would, in theory, be instant, whereas a digital-based system requires multiple clock cycles (if not many hundreds). Another advantage of neural nets utilising memristors would be their non-volatility; once power is disconnected, the memristors continue to hold their previous resistance.

How are Memristors Used in AI?

While numerous examples of memristor usage in experimental AI systems exist, one, in particular, that shows how they can produce fast results is the memristor array produced by an MIT team. While the breakthrough in the team’s research was the usage of special metallurgy methods to produce small memristors, the team was able to integrate tens of thousands of memristors onto a single piece of silicon. The chip was then trained with an image of Capitan America’s shield, and upon recalling produced an image that was superior to other memristor designs. The same memristor network was also trained to apply blurring and sharpening, with the results being better than those using other memristor designs.

How AI is Taking on Sensors