Smartphones that have the computational power to run artificial intelligence could be possible, the University of Michigan is claiming as it says it has created the first memristor computer.

A memristor computer could be up to 10,000 times better than conventional, transistor computers and use far less energy because memristors are smaller. A memristor is an electrical resistor with a memory because it has a variable resistance that can serve as a form of information storage. As memristors store and process information in the same location, that co-location removes the bottleneck for computational speed conventional computers have, which is the need for a connection between the memory and the processor.

“[Graphics Processing Units] GPUs and very customised and optimised digital circuits are considered to be about 10-100 times better than [central processing units] CPUs in terms of power and throughput,” said University of Michigan professor of electrical and computer engineering, Wei Lu. “Memristor [artificial intelligence] AI processors could be another 10-100 times better.”

Lu sees a future of AI on mobile devices because memristors use far less energy, allowing powerful computation with no change in battery longevity. A smartphone AI processor would also mean that voice commands would not have to be sent to the cloud for interpretation, giving a faster response. 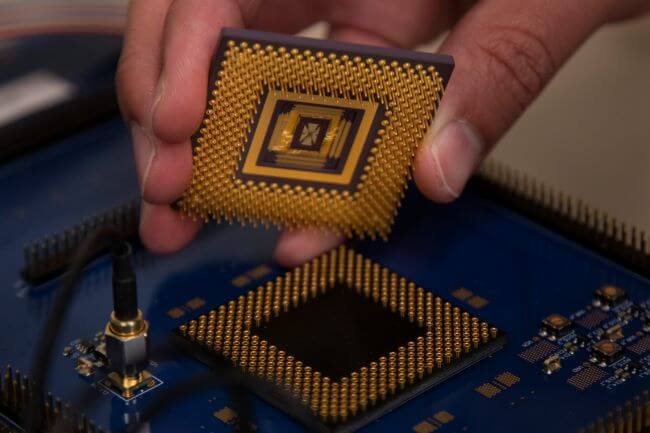 In the University of Michigan’s experimental-scale computer, there are more than 5,800 memristors. A commercial computer could have millions of memristors. To build the experimental computer, a microchip was designed that could integrate a memristor array with all the other elements on the silicon. Those elements included a conventional digital processor, communication channels, and digital/analog converters to link the analog memristor array with the conventional digital parts of the computer.

The team demonstrated the device using three machine learning algorithms. The first is called perceptron, which is used to classify information. The memristor computer was able to identify imperfect Greek letters with 100% accuracy, the University says. The second algorithm was for the compression and categorisation of data, particularly images. The computer found the most efficient way to reconstruct images and identified patterns, again with 100% accuracy. The third algorithm was for a neural network that is designed to find patterns in complex data. The neural network examined breast cancer screening data and identified malignant or benign breast tissue with a 94.6% accuracy.

Despite this success, an obstacle to creating memristor computers is the reproducibility of memristors. It has been difficult so far to reproduce, during manufacture, identical memristors and for the computer to work, each memristor has to be identical. Another difficulty is that the memristor arrays store information in an analog format, not digital. The University of Michigan researchers are working to solve the challenges.

The memristor research was funded by the United States government’s Defense Advanced Research Projects Agency, the University of Michigan’s Center for Applications Driving Architectures, and the US government’s National Science Foundation.

TSN Evaluation Kit has integral 802.1AS and 802.1Qbv standards