Apple has patented two separate methods which utilise UV light to help clean sensors in future products. What sensory devices does Apple intend to integrate in the future, and how can UV light help remove containments?

Apple applied for new patents describing the use of UV light

Recently, Apple has applied for two new patents that describe the use of UV light to clean sensors. With technology going the way it is, many devices will begin to integrate a whole array of sensors, and this is something that Apple is currently looking into. Apple plans that future devices will incorporate all kind of sensors into most, if not all, of their mobile products, including the iPhone and Watch that will allow for environmental and health monitoring. For example, Apple has suggested the use of poisonous gas sensors in their iPhone to warn the user upon detecting volatile compounds.

However, the integration of sensors into electronics does have its drawbacks with reliability being one. Devices like the Apple watch need to be environmentally sealed to ensure that water, dirt, and oils cannot get into the electronics, but a future design that incorporates a gas sensor would require an open port that allows gas to diffuse into the sensor. While dust and dirt contamination can be prevented with the use of mesh screens, compounds such as oil (secreted by lipid glands in the skin), can get through and either damage or affect the sensors ability to provide reliable readings. Removing such compounds from a sensor can be done with the use of forced air, but such a system would be bulky, noisy, and power-hungry; all of which are undesirable in a mobile design.

Thus, Apple has filed two patents that describe a method for cleaning sensors without the need for a fan or mesh; UV light and Ozone. Described in the first patent is the use of UV light that is reflected internally with the use of reflective material across the sensors. According to the patent, oil produced by human skin breaks down into gaseous compounds when exposed to UV light, and gaps in the device allow this gas to escape. The second patent takes advantage of Ozone, which can also breakdown oily compounds which can be used to clean sensors. The two patents are near identical for their use of UV light and Ozone to clean sensors but could be the key to creating reliable wearable devices in the future. 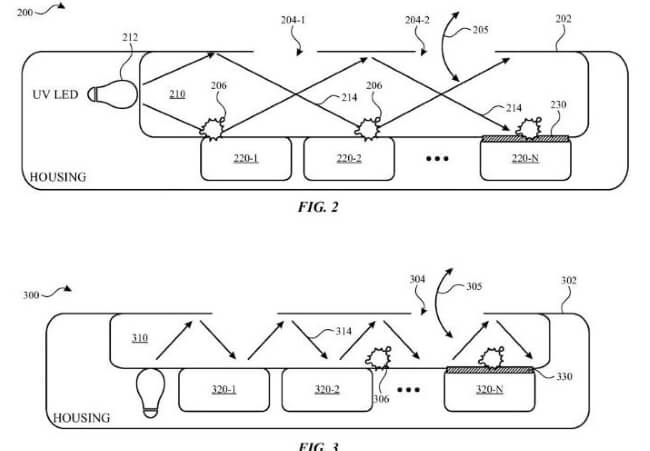 Detail from the patents showing how an ultraviolet light may be deployed within a small device.

The Apple Watch already integrates a wide range of sensors for use with health tracking and general-purpose monitoring, but one feature that stands out, in particular, is the water ejection method. While watches over series 1 are water-resistant down to 50 meters when submerged their speaker can become muffled as a result of trapped water in the speaker. However, to help remove water from the speaker, the Apple Watch has an ingenious method for removing water; the use of soundwaves from the speaker. When activated, a series of pulses from the speaker helps to expel water out of the device, restoring the quality of the speaker. In reality, this effect would go completely unnoticed, but The Slow Mo Guys on YouTube demonstrated how the effect works.

Sensors are quickly finding their way into everyday technology, but their reliability is dependent on their ability to remain uncontaminated. Unlike screens, such sensors are near impossible for the average person to clean, and so the use of advanced methods, such as UV light, may become key to future devices.