Over sixty years ago a metallurgical abnormality was discovered that revealed metal surfaces could grow whiskers.

Thinner than a human hair and virtually undetectable to the human eye, these whiskers were to wreak havoc during the early days of microprocessor development because they tend to break and create short circuits within a chip.

The semiconductor industry gradually learnt how to deal with them relative to chip design, but now whiskers in the form of dendritic growths are causing significant technical challenges in the lithium battery business that are preventing the creation of more efficient, longer lasting and ecologically advantageous battery technology.

It's understandable how electronics designers back in the 1970s were baffled as to why microchips were failing so quickly until it was recognised that these whiskers grew particularly well on tin, which is widely used in electronic components. 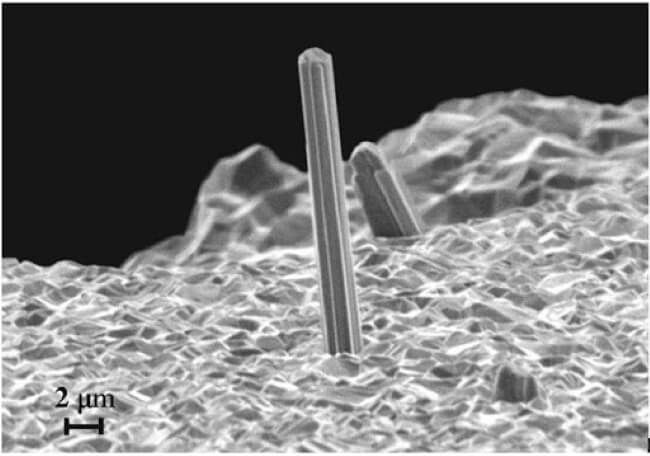 Back then, a solution to the designer stubble trouble was found by adding a proportion of lead to the tin used. This worked well until RoHS Compliance Laws introduced by the EU restricted the use of lead for health and environmental reasons.

Semiconductor companies looked for other causal factors in the hope of resolving the tin whisker problem. They concluded that mechanically and thermally induced stresses that in effect microscopically flex the surface of electronic assemblies and the chips mounted on them were to blame.

However, although physical stress can encourage whisker growth on metals, the real reasons for their existence and a related phenomenon called dendritic growths have never really been fully established.

Lithium-metal batteries have a whisker problem. Just like tin, lithium-metal is prone to developing growths on its surface. In this case, these are microscopic tree-like structures called dendrites that form in the electrolyte of the battery. They may well be tiny, but the sharp tips of these dendritic growths can infiltrate separators thereby creating short-circuits that can result in the battery overheating and in certain instances catching fire.

So we know that lithium-metal has a propensity for developing dendrites which are particularly irritating for designers and physicists trying to create batteries which have an ecologically beneficial longer life cycle, weigh less and are quicker to charge.

The point is lithium-metal is currently considered the ultimate material for battery manufacture because as a solid material it has the highest energy density which means batteries could run much longer and hold more energy than the omnipresent lithium-ion batteries that power just about every item of technology we lay our hands on.

While lithium-ion batteries work by passing lithium-ions between a graphite anode and a lithium cobalt oxide cathode, the anode in a lithium-metal battery is made of the high-energy lithium-metal.

Efforts to integrate lithium-metal into lithium-ion batteries so far have been plagued by safety issues. As lithium-ions pass between the cathode and lithium-metal anode, they prompt the formation of dendrites on the material’s surface.

Clearly, the propensity for lithium-metal to create dendritic growth is seriously hindering its use in battery technology.

However, there is plenty of research being conducted globally to try and resolve this problem, and that comes as no surprise as the financial rewards for the organisation that achieves a solution will be substantial.

For instance, a team of researchers at Washington State University has come up with a different battery construction that it believes alleviates some of the dendritic-related safety implications involving lithium-metal anodes.

In this design, the cathode is made of a porous carbon structure filled with a chemical called selenium disulfide and a couple of additives were also integrated into the electrolyte solution. This is the medium through which the lithium-ions travel between cathode and anode.

The team found that this concoction of materials prompted the formation of a dense protective layer on the surface of the lithium-metal anode. The good news was it proved to be conductive and sufficiently robust to facilitate strong charging stability and very importantly inhibited the formation of the dangerous dendrites. During testing the team claims the device was able to complete 500 charging cycles while simultaneously retaining high efficiency.

The growth mechanism for dendrites is well understood, and it requires some type of moisture capable of dissolving the metal into a solution of metal ions which are then redistributed by electromigration in the presence of an electromagnetic field.

So an understanding of the growth mechanisms of metal dendrites during an electrochemical process is of significant importance to improving the lifetime of batteries or electronic devices.

For instance, during the operation of lead-acid, zinc-air or lithium-ion batteries, the repeated charge and discharging of the battery often leads to deposition of metal dendrites on the anode electrode which can result in short-circuit between the two electrodes.

Carbon Nanotubes To The Rescue

They found that one of the ways to inhibit dendrites in batteries is to reduce how fast they charge. That, however, would not sit well with consumers who continuously want to see device charging times reduced.

The university's answer came in the form of a straightforward and effective solution. They coated a lithium- metal foil with a multi-walled carbon nanotube film which effectively quenched dendrites over 580 charge/discharge cycles of a test battery with a sulfurised-carbon cathode the lab developed in previous experiments.

The researchers reported the full lithium metal cells retained 99% of their coulombic efficiency, which is the measure of how well electrons move within an electrochemical system.

Further investigative research into dendritic growth in batteries performed at the Department of Energy's Pacific Northwest National Laboratory (PNNL) has shown the existence of certain compounds in a battery's electrolyte promotes the growth of dendrites and related whiskers.

The PNNL team found the origin of whiskers in a lithium-metal battery lies in a structure known as the solid-electrolyte interphase. In this film, the solid lithium surface of the anode meets the liquid electrolyte. Furthermore, the scientists identified a miscreant in the growth process, and that was ethylene carbonate.

The dichotomy here is that on the one hand ethylene carbonate is very good at boosting a battery's performance, but on the other, it leaves the battery vulnerable to damage.

A dendritic growth rears its unwelcome head when lithium-ions start to cluster on the surface of the anode. This structure slowly increases as more lithium atoms attach themselves.

The team used the AFM to measure the minute force of the dendritic whisker as it grew by pushing down on its tip with the cantilever of the AFM and measuring the force the dendrite exerted during its growth.

The team found that the level of ethylene carbonate directly correlates with dendrite and whisker growth. The more of the material the team put in the electrolyte, the more the whiskers grew.

The scientists experimented with the electrolyte mix, changing ingredients to reduce dendrites and found that the addition of cyclohexanone proved successful in preventing the growth of dendrites and whiskers.

So technically it's now looking like the increase in lithium-metal in battery design is set to increase and analysts predict the global market for lithium-metal will boom over the next five years with an annual growth rate of over 9% and a market value in 2025 of €650 million.