Biosensors are a technology which has attracted a lot of discussion and interest in recent weeks due to the recent coronavirus (COVID-19) outbreak. This is because biosensors are the keyway of testing whether a patient has a virus. The same approach is used in many medical areas, as most biosensors offer an easy and rapid detection by identifying the relevant biomolecules – for the case of the recent COVID-19 outbreak, it is the detection of the protein spikes on the surface of the virus or the presence of the specific antibodies that attach to these protein spikes, but the biomolecules identified using biosensors vary from test to test and ailment to ailment.

But it’s not just viruses that can be targeted and detected using biosensors. In fact, there are a number of different biosensors out there, ranging from very basic initial diagnostic tests to more high tech detection devices (which are paired with machine learning algorithms to perform more efficient tests), to detect a wide range of biomolecules, and in turn, biomolecular processes that are occurring within a patient. Here, we’re going to look at a development that has happened recently, where a graphene-based biosensor has been used to detect if a patient has cancer while it is still at an early stage.

Why Graphene is Used in Biosensors

Sensors is one of the widest application areas – both commercially and academically – where graphene has shown a lot of promise and interest. This extends out to a wide range of biosensors that are capable of detecting a number of different biomolecules. But why is graphene so useful for biosensors?

There are a number of beneficial properties that graphene exhibits. While there are a number of different graphene forms, if you take the standard graphene sheet, then its high electrical conductivity and charge carrier mobility enables it to provide a rapid response to changes in the sensing environment (the most common way a sensor provides a readable output from a stimulus is through changes in the conductivity/resistivity of the active sensing surface).

The high flexibility and tensile strength of graphene sheets also make them ideal for many biomolecular sensing applications, as the sheet can accommodate any physical changes that can occur due when the molecule of interest interacts with the graphene sensing sheet. The high relative surface area of graphene also provides a much large sensing area than other materials and its optical transparency is useful for identifying the higher density of states of biomolecules.

Overall, there are a number of reasons why graphene is useful for biosensor applications, and this is why there is a lot of research going into the area. From a general perspective, graphene is typically used in biosensors in one of four ways – as an electron transfer material between the biomolecule and the rest of the sensor, as an impedance material that can ‘anchor’ biomolecules, as a photon/phonon transfer material for identifying the luminescence of a biomolecule, and as a field-effect transistor (FET) where low limits of detection are needed.

Recent research has yielded a different type of graphene sensor. While many forms of graphene can be used, this sensor is different in that it uses a crumpled sheet of graphene. It’s not the first time that graphene has been crumpled and used in a device, but this is a rather novel application for these graphene sheets – most to date have focused on energy storage applications. Crumpling a graphene sheet essentially takes a conventional sheet and introduces wrinkles/deformations in the sheet so that exhibits different properties than its pristine form.

The FET approach was chosen specifically for this sensor as they have been proven to be an effective and sensitive way of detecting a wide range of nucleic acids without the need for labels being used. The detection of nucleic acids is a way of detecting whether a patient has early stage cancer, which in turn enables the patient to get treatment quicker, with a much higher survival rate. The reason that nucleic acids are used as the molecule of detection is due to the overexpression of DNA when someone has cancer. The overexpression of certain sequences in someone’s DNA leads to them being secreted out from the tumour and into the blood – so if certain nucleic acids are present in the blood, it is an early sign that the patient has cancer. 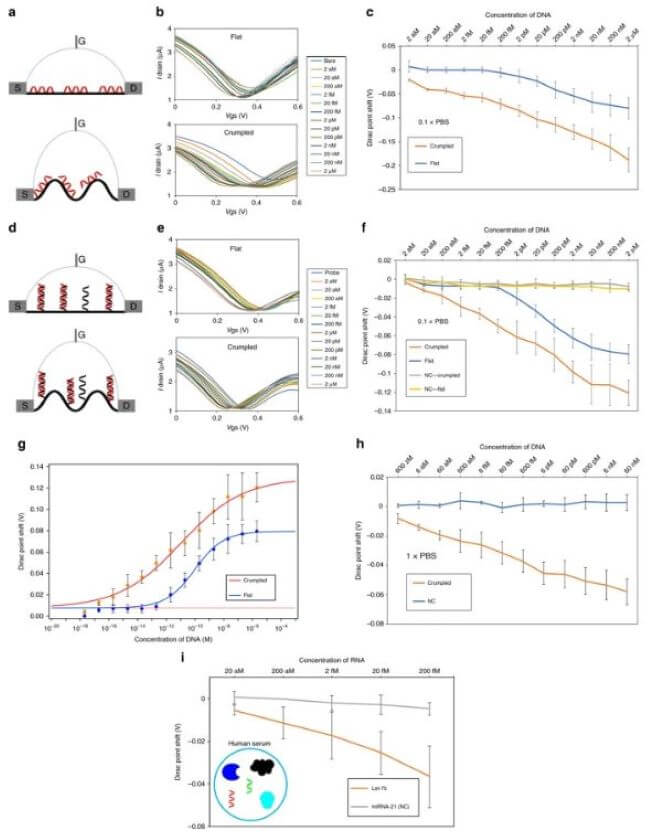 While it is a useful way of screening for cancer at an early stage of its development, many approaches require the nucleic fragments to be isolated and copied many times in-vitro. This approach is something that is both time consuming and is susceptible to errors. However, the sensitivity of the new graphene FET sensor negates the need for this process because its sensitivity is so high.

The key feature of the crumpled graphene sheets is that the nanoscale channels, i.e. the free space between the deformed sheet regions, act as so-called ‘electrical hot spots’. These hot spots were vital to the high sensitivity of the device because these channels were found to trap RNA and DNA molecules, while not being as selective to other molecules. In many other sensors, it is the opposite, where the other molecules present in a patient’s blood serum sample have more desirable interactions with the sensing surface than the DNA/RNA does.

The reason for such an affinity to DNA and RNA over other molecules lies in the different electronic properties that the crumpled graphene sheet possesses, as well as increased residence time in the channels compared to other molecules. The change in electrical properties comes from the extra strain that the crumpling process induces on the sheets. This in turn causes the graphene sheet to have an electrical bandgap (something which it normally doesn’t have) and the creation of bandgap makes it more sensitive for detecting and interacting with the electrical charges on the surface of DNA and RNA molecules.

This recent discovery has a lot of potential because it can identify the nucleic acids without needing to amplify the number of molecules in the sample. This is something that could save a lot of time and manpower and could make the whole detection process a lot easier than is currently available. It appears that while graphene has been making a lot of inroads as a biosensing platform, this is one of the most significant to date, as the potential is there for it to be made into a portable and rapid diagnosis device.