Recently, researchers from Archer Materials announced the development of in-house liquid-gate graphene transistors that demonstrate numerous applications in the field of biological and chemical testing. What challenges do typical tests face, what did the researchers demonstrate, and how could this technology power future biomarker detection systems?

What challenges does biochemical testing face?

While biochemical testing has been a critical area of science for well over a hundred years, it was the COVID pandemic that made the public aware of what it is and why it is important. Asking a random stranger what PCR and antigen tests were before the pandemic would likely be met with confusion, but after the pandemic and almost everyone knows what they are. These testing measures allow researchers to identify if someone has COVID or has had COVID in the past, and from there, can provide advice on whether to isolate or not.

But when COVID first came about, no tests existed due to the fact that COVID was a new virus. As such, researchers first needed to break apart virus samples, isolate the RNA, and then sequence the virus so that others know how to recognise it in samples. However, simply having the ability to sequence the COVID virus is only half the problem; researchers need to be able to rapidly test individuals and identify cases before those individuals continue to spread the virus. If tests take too long, massive amounts of disruption can occur, which is bad for quality of life and the economy.

This is where lateral flow tests became critical in the fight against COVID. Instead of waiting 24 to 48 hours for a result, lateral flow tests can provide results in under 15 minutes, which allows for faster screening for those with COVID.

However, not everything can be tested via lateral flow strips and trying to identify the presence of chemicals in samples, and their concentrations can require extremely expensive equipment. This is particularly a problem for researchers who have to travel to remote areas to sample the environment without access to laboratories.

One solution that can help researchers get around the need for expensive laboratory environments is the use of electronic biomarker detection methods with sensors that bind to specific biomarkers and produce an electrical output. Recognising the advantages presented by such biosensors, researchers from Archer Materials have been developing a liquid-gated graphene FET whose amplification depends on the concentration of a biomarker at its gate.

The ability to work with liquids allows for samples to be easily broken down and dissolved in water which is more easily added to the gate of the transistor. Furthermore, the use of liquid activation also allows for the use of liquid sample channels that transport a sample from a target pad into the FET for testing. Additionally, the use of multiple gFETs on a single device with a shared liquid channel also allows for a device to detect multiple biomarkers simultaneously. One such example could be the detection of multiple strains of the COVID virus to identify which one has been contracted, while another could look for different toxic compounds, including lead, mercury, and arsenic.

So far, the researchers have been able to demonstrate advanced lithographic techniques that can integrate a single layer of graphene over silicon devices while hair-thin microfluidic channels allow for samples to be transported to multiple gFETs simultaneously. Now, the company is working towards biochemical reactions capable of detecting specific DNA and RNA fragments that would allow for individual viruses and bacteria to be recognised. 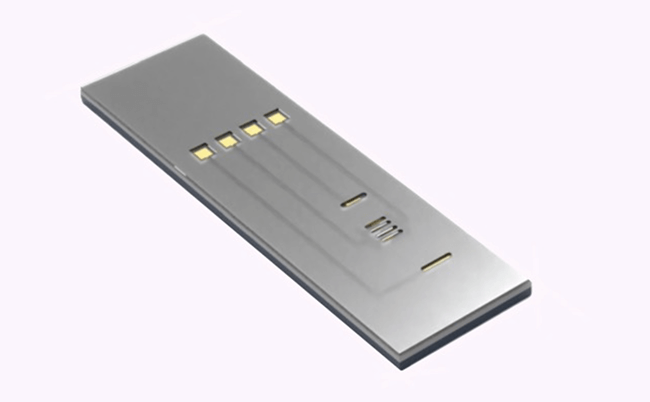 Biochip developed in-house by Archer Materials, who own 100% of the intellectual property

Using electronic sensors to detect the presence of future viruses not only allows for faster response times compared to PCR and lateral flow tests but also raises the possibility for sensors to be integrated into everyday devices, including smartphones and smartwatches. From there, these portable devices can be used to protect individuals and warn upon the detection of viruses and bacteria either passively or actively.

The same sensor technology can be deployed for environmental monitoring in both urban and remote locations. While the primary aim of such sensors is to monitor for biomarkers, they can also be used for identifying emissions and other compounds that affect air quality. And finally, the ability to detect specific compounds could also see such sensors used to detect potential chemical and biological attacks with the mass deployment of gFET devices across city areas.