7 Things You Need To Know About Artificial Photosynthesis

Photosynthesis is the process by which plants transform carbon dioxide and water into sugar and oxygen. It is an endothermic reaction, which means that it needs to absorb energy from an external source to move forward. In the case of photosynthesis, that external source of energy comes in the form of sunlight.

Because photosynthesis captures the sun’s energy, it can be thought of as a form of solar energy. It is actually more than that because it also stores that energy in the form of sugar.

Below is the chemical equation that is defined by photosynthesis:

Glucose is an energy-rich compound. It how plants store the energy that they capture from the sun.

1- How Does Natural Photosynthesis Work?

Photosynthesis works in two marvellously complex phases, the Light Reactions and the Calvin Cycle. Below is a very simplified summary:

Light Reactions: Solar energy is converted into chemical energy in the form of ATP (Adenosine triphosphate) and NADPH (Nicotinamide adenine dinucleotide phosphate.) Oxygen is a byproduct.

Calvin Cycle: The ephemeral energy (ATP and NADPH) created by the light reaction is used to build glucose precursors

Taken together, Photosynthesis, composed of the Light Reactions and the Calvin Cycle yield:

2- What is the Carbon Cycle?

Even more marvellous is that after an animal eats the plant and its sugar, a process that can be thought of as the inverse of photosynthesis converts the sugar into the energy that the body uses to function. This process is known as Cellular Respiration:

This is one of the fundamentals of life on Earth. And these two processes are important components: 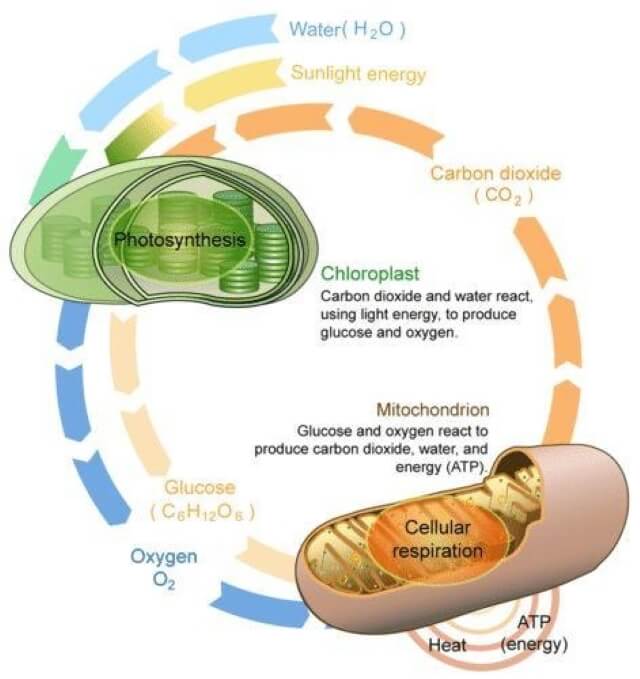 3- What Is Artificial Photosynthesis?

The generally accepted definition of artificial photosynthesis is any methodology that harvests the sun’s energy and stores it in the energy-rich chemical bonds of a “solar fuel”  which can be broken down for its energy content at any later time. Alternatively, the end result can also be an energy-rich substance, such as a plastics precursor.

It’s tempting to think of the combination of Solar Energy and Storing Solar Energy as artificial photosynthesis. Like photosynthesis, this dyad absorbs energy from the sun and stores it. However, it does not absorb carbon in the form of carbon dioxide and remove it from the atmosphere, nor does it release oxygen.

Nonetheless, the definition of artificial photosynthesis is somewhat fluid. For example, using the sun’s energy to split water:

The result is hydrogen gas, a very rich storehouse of energy that can be stored indefinitely.

This is considered to be a form of artificial photosynthesis. On the other end of the scale, there are now efforts underway to “hijack” bacteria to the purpose directly synthesizing energy-dense chemical for later use as fuels or industrial precursors.

Other methods include exploiting genetically modified bacteria to produce solar fuels such as methanol, which can be used to produce electricity through a fuel cell. Along with other solar fuels that can be produced through artificial photosynthesis, methane is also an important industrial precursor, which means that it is a chemical component widely used in industrial processes. In this manner, that industrial precursor can be obtained through artificial photosynthesis, and not through a

4- Catalysts are an Important Part of Artificial Photosynthesis

In natural photosynthesis, the light reaction depends on a substance called chlorophyll. In research being conducted by Prashant Jain at the University of Illinois, spherical gold particles of 13 to 14 nanometers in size are employed as a catalyst instead of chlorophyll.

According to Jain, "The goal here is to produce complex, liquefiable hydrocarbons from excess CO2 and other sustainable resources such as sunlight." Eschewing the production of hydrogen he affirms that “Liquid fuels are ideal because they are easier, safer and more economical to transport than gas and, because they are made from long-chain molecules, contain more bonds—meaning they pack energy more densely."

In the image below, the gold nanoparticles on the bottom covert the red/grey spheres in the centre to hydrocarbon fuel molecules. 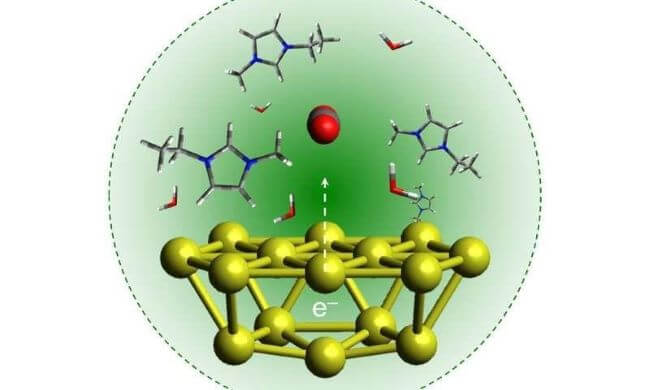 According to Jain, gold nanoparticles work well as a catalyst because their surfaces interact favourably with the CO2 molecules. They are efficient at absorbing light and do not break down or degrade.

5- Plastic Precursors can be Formulated via Artificial Photosynthesis

At Rutgers University, scientists are working on methods to produce methylglyoxal and 2,3-furandiol directly from artificial photosynthesis. These two chemicals are important precursors used in the production of plastics, adhesives, and pharmaceuticals, and they are otherwise produced via environmentally dirty processes that require the use of petroleum.

And, in this case, the catalyst doesn’t have to be gold. The methodology involves five distinct catalysts made primarily from nickel and phosphorus. By varying the conditions of the method and swapping catalysts, the chemical can be built “string together” a greater or lesser number of carbon atoms into polymers, to build different useful chemicals.

The Rutgers scientists have formed a commercial enterprise, RenewCO2, in an attempt to commercialize their discovery.

6- Hydrogen Gas can be Produced via an Artificial Leaf

Daniel Nocera of Harvard has produced what he calls an artificial leaf. This device is composed of multiple layers, each with a catalyst. The power of the sun, aided by the catalysts, breaks up the water into hydrogen and oxygen gasses. 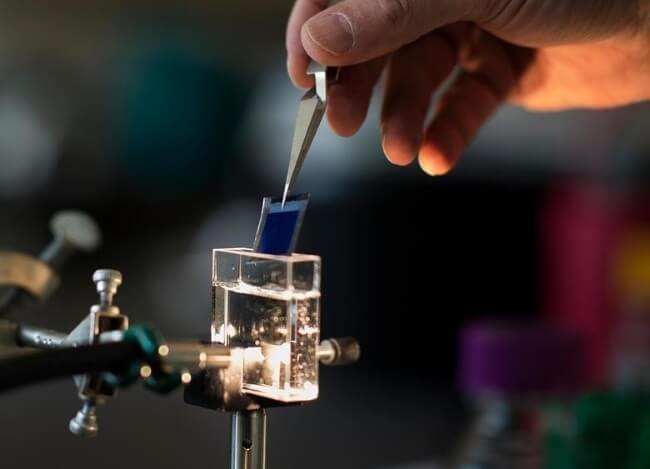 One of the high points of Nocera’s work is that the catalyst is derived from simple, inexpensive materials. And, as he describes it,  ‘We put it into a glass of water and shine light on it to split the water to hydrogen and oxygen.’

7- The Bionic Leaf can Generate Hydrocarbons

In a followup to his work with the Artificial Leaf, Nocera has devised a Bionic Leaf to produce energy-rich hydrocarbons. ‘The bionic leaf takes the hydrogen from the artificial leaf, and combines it with carbon dioxide from air to make biomass or fuels,’ says Nocera.

It accomplishes this task with genetically modified bacteria, that have been modified to exploit hydrogen from the aforementioned Artificial Leaf. As he describes it, the bugs have been modified to “eat” the hydrogen and convert it into cellular energy. The process continues by taking in carbon dioxide, to produce the sought after energy-rich hydrocarbons.

Carmakers Teaming Together to Pressure FTC on Qualcomm Appeal