How Is Renewable Energy Presently Being Stored?

While the future is bright (pun fully intended!) for utility-scale solar power there is a fly in the ointment, and that’s the problem of how to store it.

This Goes for Wind Power As Well As Solar

The wind doesn’t always blow, and the sun doesn’t always shine. During calm nights, with no sun and no wind, the flow of new renewable energy stops, but everyone still needs electricity. Renewable energy will never be more than a junior partner to hydrocarbons - or worse yet, to nukes – until more efficient ways are found to store energy.

How Is Renewable Energy Presently Being Stored

The same way the Ancient Romans powered the aqueducts – gravity. In the image below, waters came high in the mountains, and the city is at about sea level. Once a pathway, in this case, the appropriately named conduit is provided, the force of gravity moved the water down to the thirsty citizens.

Pumped-Storage for energy works the same way, only backwards! In the picture below, let’s start at the lower reservoir, and imagine it’s a windy, sunny day and there’s plenty of excess energy being generated. The utility uses it to run the pump section of the Pump/Generator, moving the water high up to the upper reservoir.

Comes nighttime, and the water a spigot in the upper reservoir is opened, and just as Roman times, the water begins its downward journey. Only this time, the fast-flowing, powerful stream of water passes through the generator portion of the Pump/Generator, generating electricity.

This type of system offers good charge/discharge efficiency. The numbers vary, but generally speaking, it’s about 80%. So, you put in 100,000 kilowatt-hours you only get back about 80,000.

The problem is the expense and size of these systems. A huge amount of water is required, and the height differential must be quite large. Because of these requirements, siting the facility is problematic.

Utilities also use batteries to store renewable energy, and lithium-ion batteries (LiBs) make up the lion’s share. There have been significant advances in recent years, bringing the cost way down. And, while at present they can’t be recharged fast enough to be practical for most auto drivers, they do charge fast enough to store utility power.

LiBs are troublesome and somewhat unstable. Unbeknownst to most users, any properly engineered device that incorporates a LiB has a significant amount of circuitry built in to invisibly regulate charging, discharging and to avoid fires. Because trained engineers, technicians and operators will run utility-scale energy storage facilities, safely managing the battery can be assured.

It’s really hard to pinpoint the charge/discharge efficiency of any battery system because there are too many factors affecting the calculation. It would probably be safe to say LiB’s offer about 70% efficiency.

Most importantly, pumped storage systems require an enormous amount of civil engineering at great expense. And, of course, projects of this nature require months, if not years to complete, and have to get through troublesome, complex regulatory approval.

LiB-based systems will not require the enormous amount of construction money, time and effort that a pumped storage system entails. You just have to call Tesla or one of its competitors.

Tesla offers a utility-scale, three megawatt-hour LiB system it calls the Megapack. By combining multiple Megapacks, a system was devised to store on the order of 100 megawatt-hours. It is illustrated below. 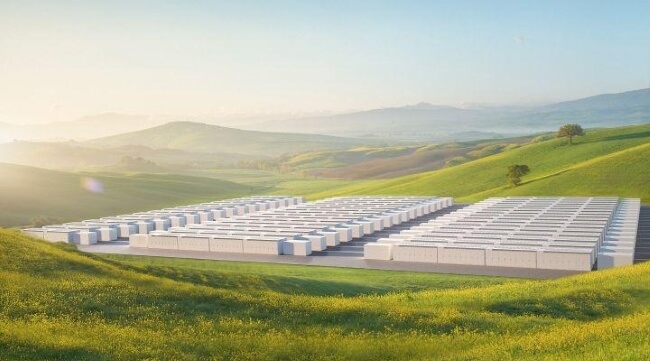 The system is tasked with storing the excess output of the Hornsdale wind farm, located about 230km north of Adelaide, Australia.

And that’s just the beginning. Tesla and the California Public Utilities Commission are said to planning a massive 1,200 megawatt-hour project scheduled to become operational in 2020.

During charging, the excess renewable energy powers redox reactions that draw electrons from one tank into the other. During discharging the extra electrons “return home”, generating electricity by their movement. 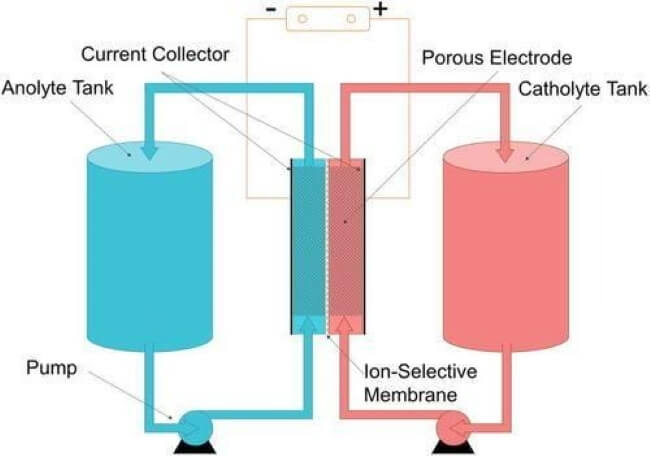 Flow batteries do not hold as much energy per kilogram of battery as LiB’s do. But, these batteries are not proposed for smartphones or electric vehicles, but rather for out-of-the-way renewable energy parks, where space is weight aren’t important factors.

They also scale better than LiBs. If you want a bigger battery, simply build larger tanks and electrodes. The situation for LiBs is more complex.

Also, if there is a fault, the flow of the two electrolytes can simply be halted. Thus, only the relatively small amount of electrolyte immediately in touch with the electrolytes is subject to a possible uncontrolled energy discharge. This is not the case for LiB’s, where all the stored energy is will be disastrously expended in a crisis.

The options listed here are by no means the total of what is happening in energy storage. Perhaps the most exciting quest is that for artificial photosynthesis.

Plants take carbon dioxide out of the air, and through chemical reactions powered by the sun’s energy, they create energy-rich carbohydrates. There has been work done attempting to “hijack” one-cell pants and to divert them into electrical production.

Other projects have been started to synthesize energy-rich compounds used in the chemical industry. If this succeeds, dirty industrial processes and the environmental havoc they create can be sidestepped.

Unfortunately, none of these photosynthetic processes is ready for commercialization.

There is a vast amount of research taking place worldwide in energy storage. Solar cells are cheap and getting cheaper all the time. It’s like the happy situation of earning so much money that it’s hard to find a bank that can hold it! Billions of dollars are being spent annually, and while progress is slow, it is steady. We are, inexorably, moving toward the age of the renewables.