What challenges do disposable electronics present?

Just 100 years ago, very few items were considered disposable, and almost everything was repurposed, reused, or recycled. Old newspapers quickly found use in fish and chip shops, scrap metal was valuable, engines would be stripped down for key parts, and tools would be constantly refurbished. In fact, I personally own a G-clamp that dates back to the turn of the 20th century, given to me by my grandfather, and it still holds up today!

But as mass production took over, so did consumerism, and the insane amount of money generated by consumerism led to disposable items. The invention of plastic allowed for products and packaging to be quickly fabricated in the millions, and this mass production made them cheap enough to be thrown away. This consumerism has also affected the electronics industry greatly, with many companies pushing out new products almost yearly to try and keep sales as high as possible.

Current mainstream electronic devices (those using PCBs, SMDs, and connectors) are far from disposable. Even if a circuit costs a few pennies to produce, the numerous heavy metals commonly found in semiconductors, along with microplastics and other harmful compounds, make electronics particularly damaging to the environment (see e-waste).

Furthermore, the materials used to make electronics are not only in short supply but see massive environmental damage done. This is especially problematic in foreign countries where environmental protection laws are virtually non-existent, and such places can also see modern slavery practices. This is why many manufacturers in the US and UK face strict rules when using resources from countries such as the DRC, where modern slavery is rampant.

Recognising the challenges disposable electronics face, researchers from the State University of New York recently developed a functional disposable circuit complete with resistors, capacitors, and a transistor for amplification. The researchers noted that their circuit construction technology was able to produce tunable resistors from 20Ω to 285KΩ, supercapacitors with capacities up to 3.29mF, and electrolyte-gated field-effect transistors, all of which were fabricated on a single sheet of paper.

To develop the circuit, the researchers started with a paper substrate that was then printed with a pattern of wax. Once printed, the wax was melted so that it penetrated the paper, but areas uncovered by wax remained permeable. After the wax had melted and cooled, the paper was then coated with semiconductive inks that created channels, and subsequent printed conductive ink layers provided connections between different components.

Finally, to demonstrate the circuit’s ability to be disposed of, the researchers set fire to the circuit, which instantly resulted in complete combustion with nothing left behind. If future circuits were based on the same technology, it could allow for disposable electronic e-waste to be entirely eliminated, but while this may see fewer impacts at landfills, it could cause problems for air pollution depending on the particulates emitted. 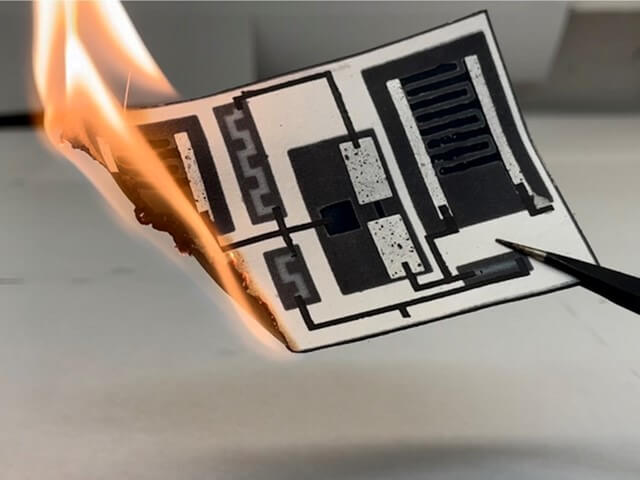 Why is this demonstration the most practical to date?

While there are numerous teams of researchers and companies working towards disposable electronics, what makes the design demonstrated by the researchers from the State University of New York rather unique is its simplicity and ease of manufacture. The use of wax to create channels introduces numerous possibilities in the field of paper-based electronics, while the use of semiconductor inks to realise functioning transistors is a major step towards practical electronics.

Of course, the demonstrated design doesn’t integrate many transistors, which seriously limits its capabilities. These paper-based circuits will certainly not replace the performance offered by mainstream microcontrollers or even those by companies such as PragmatIC, which have already demonstrated fully flexible microcontrollers. But the ability to fully burn the circuit, print amplifiers, and do so on a flexible piece of paper is certainly good news for the disposable electronics industry.