What challenges do disposable electronics present?

One fact of life that has changed dramatically over the past hundred years is the mass use of disposable items. In the past, most produce would not come in packaging; the carts used to deliver them would be returned, and if disposable packaging was used, it was almost always recycled or at least reused (newspapers for fish and chips, old wood for kindling etc.). Fast forward to modern times, and it seems that trying to buy anything that doesn’t come with some sort of packaging is next to impossible.

One typical example of disposable electronics is RFID tags used to protect items in a shop. These devices integrate a printed antenna that is energised by a security gate and, upon activation, will emit a signal that is detected by the security gate and thus triggers an alarm. If a product has been purchased, this RFID tag will be deactivated, so it doesn’t trigger the gate.

While disposable electronics present numerous opportunities, they are not without their challenges. One big issue faced by disposable electronics is the numerous toxic compounds found in traditional semiconductors. When buried in a landfill, these compounds can leech out and contaminate the nearby soil, and this, in turn, can affect groundwater, rivers, and local wildlife.

Another challenge faced by disposable electronics is power. In the case of RFID tags, they only need to be powered when walking through a controlled area, but creating disposable electronics that need to be switched on for extended periods is highly problematic. Of course, numerous battery technologies exist (such as coin cells) that can easily power such a circuit, but their disposable nature means that they must be safe to throw away. As batteries can start fires and contain harmful compounds, a disposable circuit powered using off-the-shelf battery technologies is not appropriate.

Recently, researchers from the Swiss Federal Laboratories for Materials Sciences and Technology (EMPA) announced their development of a paper battery that is activated by water. Simply put, as the name suggests, the paper battery utilises a thin sheet of paper that is soaked in salt water and then left to dry, and once dried, ink containing graphite ink is painted onto one side while the other side is painted with ink containing zinc.

Afterwards, both sides had a second layer of graphite flakes printed to act as electrodes. Once dried, the battery produces no voltage, but when activated with a few drops of water, the battery is capable of producing a voltage as high as 1.2V.

To demonstrate their battery’s effectiveness, they connected it to an alarm clock and applied several drops of water to the battery. After 20 seconds, the clock began to function and remained functional for an hour until the battery dried up.

According to the researchers, the use of zinc is important as it is an environmentally friendly material. As such, a disposable electronic circuit connected to their zinc battery would be able to power itself while also being fully disposable, and the low energy density of zinc batteries reduces the fire risk from short circuits. 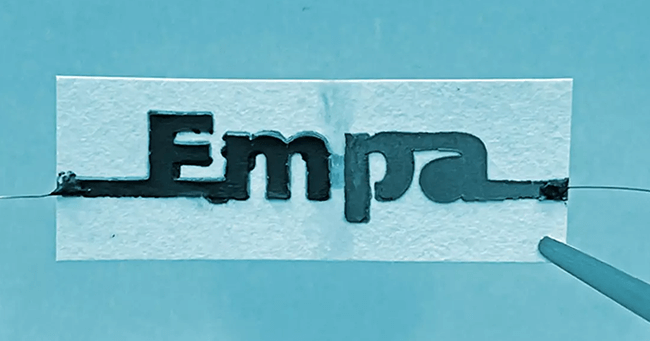 How could such batteries help the disposable market?

Before we look at the practical applications of such a battery, it is important to address the media reaction to this development, as some reports mislead readers.

Firstly, some reports call the battery a “water switch” as it operates when in contact with water. While this is technically true, water is an essential component of the battery’s operation and, as such, cannot be called a battery without water. An analogy to this would be calling cars “petrol activated vehicles”, in that when petrol is fed into the tank, the car operates.

Furthermore, this so-called “water-switch” can easily be replicated at home using a copper penny, a piece of paper, and tin foil stacked together. This battery only operates when activated by vinegar, but the truth is that vinegar is an essential component for that battery to operate.

Secondly, some reports are comparing the new battery to AA batteries which have an output voltage of 1.5V. However, this is incredibly misleading as AA batteries can output significantly higher currents compared to the batteries developed by the researchers. If the researchers connect ten of their batteries in series, they could claim to have made a 12V paper battery just like those found in cars, but in reality, a 12V car battery can provide 1000A for starter motors while the zinc battery would produce microamps.

With those points addressed, the zinc battery does indeed present numerous possibilities in the field of disposable electronics. One such use could be moisture-activated circuits found on the packaging. A simple counter circuit that increments by one every second could be powered whenever moisture is detected, and if non-volatile memory is used to store this value, it could be a cheap method for basic sensor tracking (i.e. how much moisture a container has been exposed to).

Another potential application for such a battery would be one-time use medical equipment such as thermometers. A basic plastic housing with a thermal probe at one end would have a button on the other end that, when pressed, releases water onto the internal zinc battery. From there, a reading can be taken and immediately thrown away afterwards.

Disposable paper batteries that are environmentally friendly have numerous possibilities, but while they may be suitable for disposable applications, we should ask ourselves if disposable electronics are indeed a good idea.