Recently, the UK government announced that it will be blocking the sale of SCAMP technology to a Chinese-based company by the University of Manchester on national security grounds. What is a SCAMP vision sensor, why has the government blocked the sale, and why are we seeing more UK companies selling to China?

What is a SCAMP sensor?

A SCAMP sensor combined a massively parallel SIMD processor array with pixels on an image sensor. While a typical image sensor directly streams raw pixel data, a SCAMP sensor will pre-process the raw data before being streamed, which helps to massively reduce the workload by external processors while also increasing the effective speed of the image sensor.

In a SCAMP, each pixel has its own miniature microprocessor that includes registers, comparators, memory, I/O, and other control circuitry that can be programmed to perform a range of functions such as edge detection blurring, and correction. As such, a 256-pixel x 256-pixel SCAMP sensor would have 65,536 processors. While this allows for real-time image processing, the need for a processor at each pixel can see large energy requirements and reduced pixel count.

Furthermore, a SCAMP processor is not designed to run all image processing algorithms on-chip but can instead help to offload tasks to help speed up image processing. For example, a SCAMP could be used to automatically take HDR images by combining previously obtained pixel readings and then combining the data (whereas an external processor would have to stream multiple raw frames and then combine them). 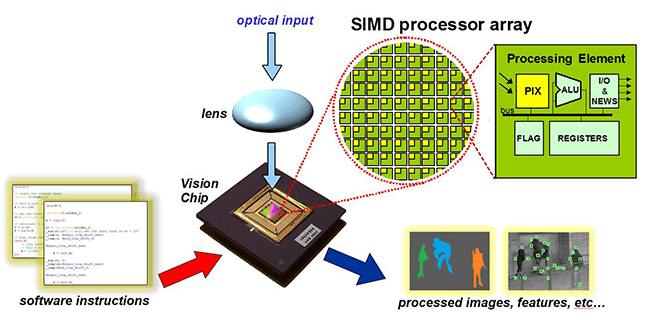 Recently, the UK government announced that it has blocked the sale of SCAMP technology developed by the University of Manchester to a Chinese entity (Beijing Infinite Vision Technology Company Ltd) on national security grounds. Specifically, licenses to develop, test, and manufacture SCAMP-5 and SCAMP-7 devices have been restricted, and the attempt to sell the technology triggered the National Security and Investment Act 2021.

According to the UK government, the SCAMP-5 and SCAMP-7 technologies have potential uses in military applications and providing this technology to China would put the UK at a disadvantage. While the exact details haven’t been fully released, the UK government is likely concerned with the sensor’s ability to process data in real-time (exceeding 1000fps).

Image sensors with such capabilities can provide advanced capabilities to missile systems, drones, and tanks. In fact, this is the reason why the sale and shipment of thermal cameras with an FPS greater than 10 is often restricted. In the case of SCAMP sensors, a missile with such a sensor could use edge detection to determine the outline of an enemy vehicle and directly feed this into an AI for targeting.

Why are we seeing more UK companies selling to China?

This is not the first time we have seen the UK government step in and prevent the sale of a technology or company to foreign nations. Recently, ARM was banned from providing licensing to Russian entities by the UK government over the Russo-Ukraine war, and the sale of a semiconductor foundry in Wales to a Chinese business was also halted on the grounds of national security. Additionally, the US has gone out of its way to try and prevent China from having access to ASML machinery designed to manufacture cutting-edge semiconductor technology, and numerous shipments to China have also been seized.

From China’s point of view, purchasing stakes in western technology companies makes perfect sense as it can help provide access to key technologies without needing to develop those technologies independently. Furthermore, the continuing digitisation of China, combined with the desire to improve its military capabilities, will require China to have access to the latest semiconductors and software systems. While China has demonstrated its ability to create the world’s most powerful AI platforms, its access to the hardware is limited due to its inability to develop cutting-edge semiconductors without relying on outside nations (hence the need for ASML photolithography machinery).

But why UK companies are readily opening themselves to Chinese investors is not so easy to determine. UK-based companies are likely looking to increase their investments and expand, and China is often keen to provide such investments. Furthermore, China’s desperation may see sales above the market rate, which also provides a strong financial incentive.

However, it is worrying that UK companies and organisations are quick to find foreign investors and attempt sales without considering the ethics of the sale. In the case of the University of Manchester, they should have considered the potential uses of their vision technology, especially when China is well known for using AI and surveillance to control its population and restrict freedoms. Additionally, the military implications of the SCAMP vision sensor would give China a military advantage, especially if combined with drones and AI technologies.

Capitalism is one of humanity’s most outstanding economic achievements as it takes advantage of human selfishness to drive growth, improve technology, and create stable living conditions (no system has brought more people out of poverty than capitalism). However, engineers and business owners of technology companies must consider the ethical implications of the technology they develop; otherwise, the fruits of capitalism could be used to destroy itself.

5 Things You Need to Know About Designing for EMI Resilience