Recently at Embedded World 2022, OpenHW demonstrated their latest RISC-V development board that shows off their CORE-V MCU. What advantages will RISC-V present to the microcontroller world, what specifications does the new board have, and what role does RISC-V play in open hardware?

What advantages will RISC-V present to the microcontroller world?

Despite RISC-V being in its infancy, engineers worldwide are coming to realise the major advantages presented by the open-source CPU architecture. The lack of a license allows for manufacturers to develop their own RISC-V cores that are tailored to their own needs, while the use of a common instruction set allows for code to be cross-platform by nature. Furthermore, using a common instruction set also helps software tools target a much wider audience, which can help accelerate the development of new projects.

Of course, that isn’t to say that all RISC-V cores will be free of licenses. While the instruction set is open-source, the core implementation is proprietary technology meaning that companies specialising in RISC-V CPUs will undoubtedly sell their designs as IP cores. But knowing humans, there will also be plenty of open-source RISC-V cores that will be entirely free to implement. Thus, the combination of an open-source architecture with VHDL and Verilog implementations will allow anyone to flash their own CPU inside of FPGAs that can be updated with time (and thus secure against discovered vulnerabilities).

With regards to the microcontroller world, RISC-V presents numerous possibilities, whether providing a common platform for both microcontrollers and microprocessors or expanding the market for more microcontroller choices and more unified designs. ARM is one of the most common of all microcontroller architectures thanks to its large software support, ability to consume very little energy, and ease of implementation.

But the licensing restrictions combined with the subjugation to UK law will diminish ARMs’ presence in eastern markets (such as Russia and China). As such, RISC-V will eventually present itself as the only logical alternative. If RISC-V takes off in China, the rest of the world will likely follow suit as China could provide western companies with a low-cost alternative to ARM (similar to the GD32 range of microcontrollers). 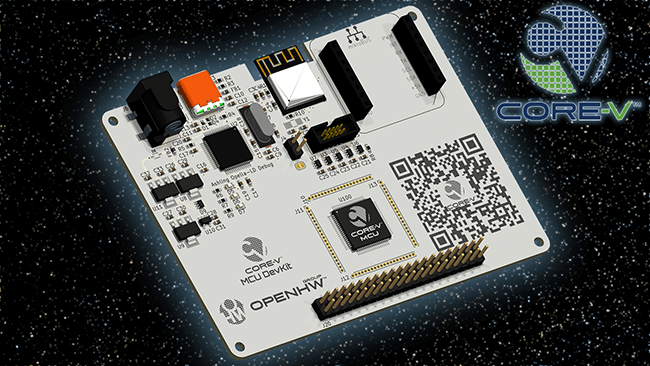 Regarding hardware, the board integrates an I2C temperature sensor, multiple LEDs, a reset button and general-purpose button, and a 40-pin expansion header. Being targeted at the IoT industry, the microcontroller development kit also integrates an Espressif AWS IoT ExpressLink Module, and the addition of a mikroBUS allows for use with mikroBUS click boards. Software support for the new development kit includes an IDE, debugger, GCC compiler, FreeRTOS, and AWS connectivity with the Espressif Wi-Fi link that also utilises a RISC-V core.

Currently, the board is still in its final stages of production and, as such, is unavailable at this time. However, those looking to develop with RISC-V technology and who want to reserve a board (whose quantities will be limited) can do so by visiting this link:

CORE-V MCU DevKit: A Development Kit for the OpenHW CORE-V MCU based on the CV32E40P Open-Source RISC-V Core

What role will RISC-V play in open hardware?

Open hardware (the concept of hardware being open-source) presents the engineering world with all kinds of possibilities, and the development of RISC-V only helps realise this. The idea of creating a CPU implementation that is entirely free for anyone to view not only helps accelerate its use but also builds trust with its users.

If RISC-V designs move towards FPGA implementations instead of dedicated silicon chips, it could usher in a new era of programmable hardware. Devices using such an FPGA could update their CPU to accept new instructions, fix security vulnerabilities, and even integrate new hardware bus protocols. For example, an ageing USB port could easily be reprogrammed as a serial connection or Ethernet port for high-speed communication, and this would require no hardware changes to the board.

Of course, RISC-V is still in its infancy, and it has a long way to go before becoming a major contender to existing architectures such as ARM and x86/x64. The board developed by OpenHW Group will undoubtedly help engineers experiment with the platform, and the release of the CORE-V MCU source code will also accelerate the use of RISC-V in microcontrollers.