Trying to balance the energy demand and supply of energy in real-time can be difficult when the energy being produced is based on the local environment—which can change at any time and is likely to have defined down periods, i.e., solar cells at night. While storing energy in batteries is one option, another potential solution is to store the energy produced during the day in the form of electrolytic hydrogen production using Power-to-Gas (PtG) processes. These PtG processes can absorb the electricity produced during the day when there is plenty of electricity being generated and yield hydrogen. This hydrogen can then be used to power other systems, such as industrial processes.

There are also PtG systems that are reversible. Rather than removing the hydrogen for use elsewhere, the stored hydrogen can be converted back into electricity during periods of limited power supply and when the energy prices are high. So, there is the potential for reversible PtG systems to connect the existing markets for electricity and hydrogen while limiting the price volatility often present in electricity markets and offering ways of providing electricity in time’s when it’s traditionally scarce. 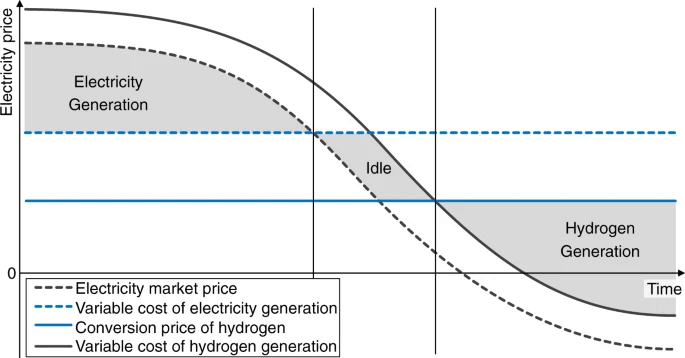 The figure illustrates the three alternative operating modes for either a modular or an integrated reversible PtG system that emerge for varying electricity prices. Wholesale electricity prices can turn negative as a result of surplus energy being supplied to the grid at certain hours.

As the energy market moves toward intermittent renewable energy sources, regulating electricity flow day and night will become ever more critical. The potential benefits of PtG systems could be one such option to achieve this. But the big question is, for large scale adoption across different markets, is something like this commercially feasible?

The Types of PtG Systems Being Explored

For the modular systems, they are considered to be modular if the two production processes run on separate equipment. The modular systems typically combine a one-directional electrolyser (for hydrogen production) with a one-directional fuel cell or gas turbine for generating power. As it stands, electrolysers have become very cost-competitive for producing hydrogen. However, one-directional fuel cells and gas turbines are still seen as being too expensive for converting hydrogen back to electricity. This electricity would be sold back to wholesale markets, so it needs to be economically feasible as well as scientifically efficient.

On the other hand, unitised regenerative fuel cells―often known as integrated PtG systems―use the same equipment to deliver both hydrogen and electricity depending on the electrical needs and energy costs at the time. Many of these systems use a proton exchange membrane (PEM), and while they can operate in both directions, they can only run in one direction at any given time.

Given that there are different options that could be feasible for use with intermittent renewable energy sources, a study has recently been published that investigated the real-time operations, the cost competitiveness, the value of reversibility, and the current economics of reversible PtG systems, to see if any of them could be commercially feasible. To give it a global perspective, the study looked at both the Texas and German markets, taking into account local electrical volatilities, to make sure that any conclusions were made with different energy markets in mind―not just a single market that may not be indicative of a global energy market.

The overall results of the report showed that modular systems require low hydrogen prices for the reversibility feature to be of economic value. On the other hand, the calculations showed that the integrated PtGs can be economically viable when the hydrogen prices are high because they can not only generate the hydrogen easily but they can also provide more electricity back to the grid during times of limited power supply―making them a better buffer against price fluctuations and the intermittency of many renewable energy sources.

Even though there have been improvements in recent years toward the cost and conversion efficiency of modular PtG systems, the study found that there is no economic case, for now, and in the foreseeable future, for investing in modular systems. This is something that has been investigated in the past but remains true despite improvements. 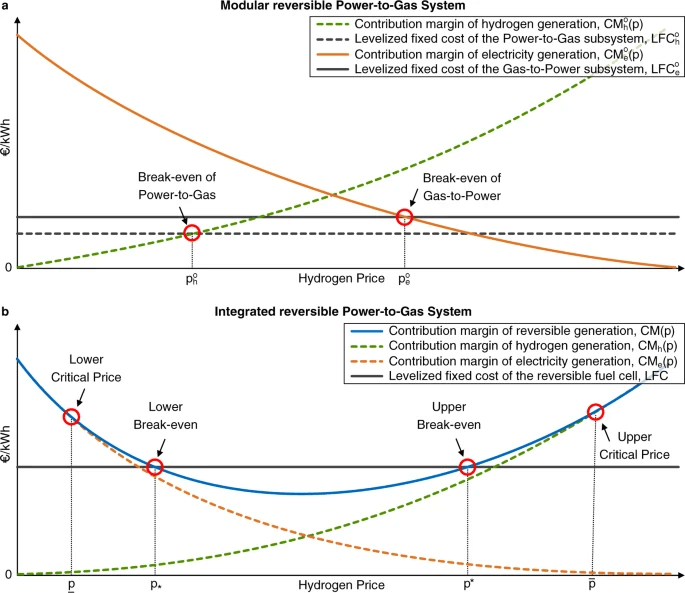 On the other hand, integrated PtG systems that are based on solid oxide cell technology were found to be competitive at current hydrogen prices―whilst still accounting for the potential for variation in volatile markets. The most efficient use of these systems was found to be to produce hydrogen and convert it back into electricity when the electricity prices are high. Integrated systems have a high-capacity utilisation, so they are seen as more competitive than one-directional electrolysers on their own. Even though the integrated system is a much more expensive system to install, it has a lower break-even price than the modular electrolyser.

The report concluded that if the recent trends regarding the acquisition cost and conversion efficiency of solid oxide fuel cells (SOFCs) continue, then the integrated PtG systems should remain economically viable, even when the price of hydrogen drops. This is primarily because the flexibility of the integrated system allows it to respond to lower hydrogen prices by operating more frequently in the reverse mode, i.e., delivering more electricity to the power grid and power markets.

If PtG systems are used in a way that they take advantage of the fluctuations in electricity prices, they can not only act as a buffer in volatile electricity markets, but they could also help to broaden the hydrogen supply chain as a source of production―primarily for industrial markets. If the cost of SOFCs continues to go improve as they have done over the last few years, then integrated PtG systems could be a competitive option for many years to come when the hydrogen prices are both low and high.

On the other hand, the study has confirmed what was previously stated about modular systems, in that they are not going to be a commercially viable option, especially when there are other options on the table. From an industry perspective, the flexibility of the integrated PtG could make them a valuable solution during periods of electricity scarcity, including regular demand peaks and irregular supply shocks. As we continue to see greater adoption and market penetration of renewable technologies, the flexibility of the integrated PtG systems is a feature that could become more valuable over time.

Skin Patch Sensor All In One