Li-ion batteries are the most widely used modern-day battery, but several other metal-ion batteries also show a lot of promise. Modern battery technology could help to alleviate the dependence on lithium materials (and lithium mining). One of the promising low-cost options with an abundance of raw materials is sodium-ion (Na-ion) batteries.

One of the selling points of Li-ion batteries is that it has a good energy density (nowhere near the best) and long-term stability, and this combination of properties has meant that the Li-ion has become the dominant rechargeable battery on the market globally. Na-ion batteries have the potential to be used in the market as they would have a lower cost per kWh than Li-ion batteries. Still, they currently suffer from lower specific energies than lithium because sodium is heavier and has a lower reducing potential.

To improve the state and performance of Na-ion batteries, some of the key strategies are looking towards improving the specific energy and energy density at the cell level by focusing on the cathode material. Researchers highlight a need for cathode materials that can be reversibly operated at high voltages with a stable cycling behaviour and possess high Na+ extraction properties.

While there have been advances in the cathodic materials available for Na-ion batteries, another challenge still remains. This challenge tackles the oxygen redox reaction that occurs at high voltages within sodium layered cathode materials. This process is irreversible and causes structural stability issues within the cathode and poor capacity retention during cycling. So, there’s a drive to eliminate these issues in Na-ion batteries to help promote their commercial feasibility in the battery market. 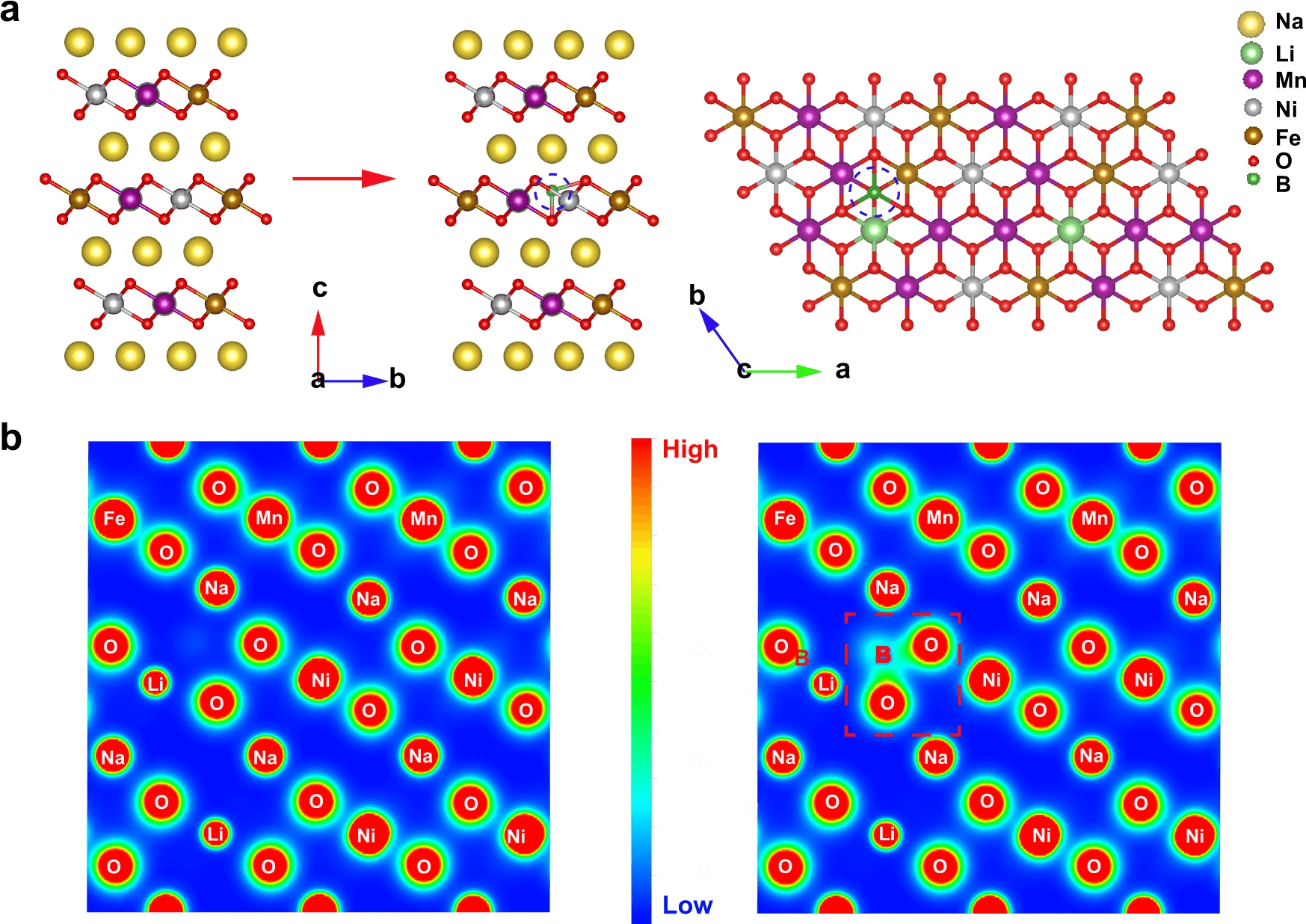 A similar chemical scenario has been observed in sodium-rich and sodium deficient layered oxides. These can form different chemical interactions, such as Na-O-Na, Na-O-Li, and Na-O-Mg interactions. These interactions can trigger a redox reaction within Na-ion batteries because these interactions form nearly non-bonding state oxygens, which can dissociate away from the cathode irreversibly.

While the combination of anionic and cationic redox reactions within rechargeable batteries are crucial to the charge and discharge of the battery, it is the irreversible loss of oxygen with some layered cathode materials that is the issue for many Na-ion batteries. The oxygen atoms typically become detached from the layered oxide cathodes in Na-ion batteries at high voltages, but this loss of oxygen in the cathode is irreversible and results in structural degradation of the cathode and poor electrochemical performance.

Moreover, once the oxygen is released from the cathode, it also decomposes the electrolyte in the battery. The decomposed molecules then sit on top of the cathode, creating a resistive layer on its surface, causing the Na+ transfer kinetics to become very poor. So, there is a need to suppress this irreversible oxygen redox reaction if the commercial prospects of Na-ion batteries are to improve.

Many of the strategies used to alleviate the oxygen redox reaction have involved lowering the operating voltage (so it doesn’t hit the high voltage levels where oxygen atoms start to break away from the cathode), reinforcing the metal-oxygen bonds in the cathode with coatings and dopants to suppress any oxygen release.

While lowering the operation voltage can help to reduce the oxygen redox, this approach significantly reduces the specific energy and energy density of the battery. So, in this approach, you have to undergo a trade-off, but trade-offs of this level are not suitable for commercial batteries where a higher energy density is expected.

The other approach is dopants and coatings. There have been several options, from inert surface metal oxide coatings to doping the cathode within inactive metal cations, which have helped reduce the oxygen redox reaction by suppressing the surface irreversible phase transformations and increasing the oxygen binding energy.

Despite advances in the dopant and coating space, coatings can be troublesome as the types of coatings used have struggled to be deposited homogeneously, and heavy metal dopants reduce the specific capacity in the cathode. So, lighter doping atoms, such as boron, are gathering a lot of interest for solving the oxygen redox conundrum.

Researchers have now developed a new doping strategy to integrate lightweight boron atoms into the layered cathodic materials in Na-ion batteries to suppress the irreversible oxygen release at higher voltages. Boron has the highest binding energy with oxygen among the previously trialled dopants, so the high binding energy of the B-O bonds means that it can be used to suppress the loss of oxygen in the metal oxide lattice by holding it a lot more tightly within the inorganic lattice of the cathode material.

The team ran some calculations on the bonds and found that the presence of boron atoms also made the oxygen atoms more electronegative. This meant that the oxygen atoms could resist excessive oxidation during high voltage because of an anion redox charge compensation mechanism. Physical experiments and characterisation efforts confirmed that any irreversible oxygen release from the lattice was suppressed in the doped cathode, promoting greater cathodic stability.

The doping of the cathode with boron also triggered a more cationic redox reaction (rather than anionic) which donated extra capacity into the cathode of just over 10%. Beyond this, the doped cathode also showed a higher reversible capacity and higher cycling stability compared to an undoped cathode. The battery created using the doped cathode also delivered a specific energy of up to 224 Wh kg-1. Still, the most important aspect of the research was the suppression of the oxygen redox reaction.

Even though there’s a long way before Na-ion batteries become comparable with Li-ion and other commercially available rechargeable batteries, this recent study is offering a way of tackling one of the more pressing challenges of Na-ion batteries (and is achievable by a relatively easy-to-fix method in the form of doping) while simultaneously increasing the capacity of the batteries. This can open the door to other, more stable and higher capacity, layered oxide materials to be trialled and doped in a similar manner.