Part I: Are hydrogen and electric cars really on the right ecological track?

Hydrogen is one of the possible fuel options that shows enormous ecological promise. Although it is, of course, colourless, the many ways of creating it have generated a whole kaleidoscope of colour-classified hydrogen derivatives.

As world leaders at COP26 try to fathom out some sort of mutual agreed global strategy to cut carbon emissions, science and technology initiatives continue to reveal the good and bad energy options.

So what are the different types of hydrogen, and how are they produced? And what would be the impact on the amount of electronics technology that would be applied to make hydrogen-propelled vehicles a viable proposition? 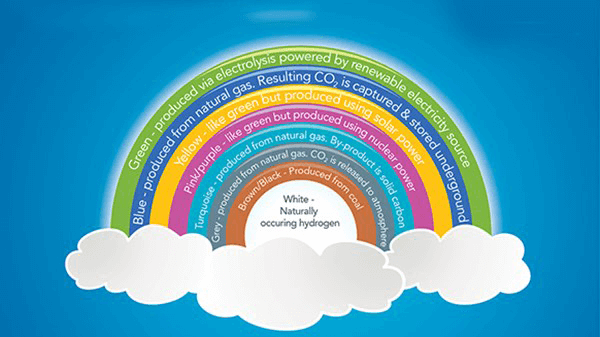 Unfortunately, the global chemical industry mainly produces grey hydrogen, and it is ecologically damaging. This is because grey hydrogen is created from natural gas or methane using steam methane reformation. So it uses fossil fuels to manufacture it, which releases a greenhouse gas (CO2) into the atmosphere. So forget that one.

A hot favourite at the moment and one you’ll hear a lot about is green hydrogen, which can be produced without pumping tons of CO2 skywards. BUT there is just one ecological sticking point. Green hydrogen is made using electricity to electrolyse water. Electrolysers use an electrochemical reaction to split water into its hydrogen and oxygen components, emitting zero-carbon dioxide in the process.

This is fine, providing the electricity employed is created via renewable energy sources such as solar or wind power. Unfortunately, at present green hydrogen only makes up a small percentage of the hydrogen produced because production is costly.

There are also energy vector transmission considerations here which is just a posh way of saying that whether it’s electric or hydrogen energy, there better be plenty of green electricity available to meet manufacturing demands and a network that can efficiently provide it.

Next on the colour chart is blue hydrogen. This is not really a long-term carbon answer but could serve as a short-term transitional technology. It is produced from natural gas using a process called steam reformation, which combines natural gas and heated water in the form of steam. The output is hydrogen – but also carbon dioxide as a by-product. That means carbon capture and storage is essential to trap and contain this carbon. So it’s a lower carbon product than the grey bad-boy but is not really what the world wants long-term. 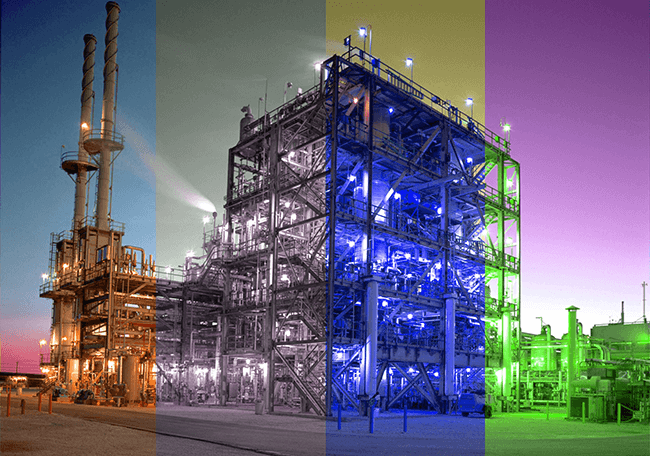 Talking of carbon bad boys, right up there with grey hydrogen are black and brown hydrogens that are so-called because they are produced using black or brown coal. Obviously, these are a complete no-no, although recently and somewhat surprisingly, Japan and Australia have unveiled a joint brown coal-to-hydrogen project. This endeavour will use brown coal in Australia to produce liquefied hydrogen, which will then be transported to Japan. Interesting to see how they sell that idea to environmentalists and the COP26 crowd.

When it comes to hydrogen production, solar power will have a role to play in powering the electrolysis that creates yellow hydrogen, which means it will meet ecological ambitions.

OK, moving on to pink. This hydrogen is created via electrolysis powered by nuclear energy. Just to confuse you, nuclear-produced hydrogen can also be referred to as purple hydrogen or red hydrogen. In addition, the extremely high temperatures from nuclear reactors could be used in other hydrogen manufacturing sites by producing steam for more efficient electrolysis.

Last on the list is turquoise hydrogen which is made using a process called methane pyrolysis to produce hydrogen and solid carbon. This process could be extremely useful in the future, providing a couple of things happen. Firstly the thermal process involved must be powered by green electricity, and the solid carbon created must be stored.

Pyrolysis of methane is a heat reliant endothermic process that begins to produce carbon and hydrogen at 300degreeC and progresses to approximately 1000degC. One imaginative way of running methane pyrolysis would be similar to the blast furnace principle used to process iron ore. Here methane would be fed into the bottom of a high-temperature reactor filled with molten metal. This would create hydrogen and solid carbon, which could easily be drawn off. Here lies the rub, though. Firstly would the heat process be powered by green renewable energies, and how would the vast amounts of globally produced solid carbon be stored?

So those are the hydrogen varieties that science and technology have identified so far.

But what about the take-up of electronics technology in hydrogen vehicles?

I don’t think a lot is going to change there. Currently, electronics-related technology accounts for about 38% of a modern car’s value. Things like engine, transmission, chassis electronics, safety systems, and entertainment and navigation technologies will not change. It’s a given that hydrogen vehicles will have these technologies along with some specific items. 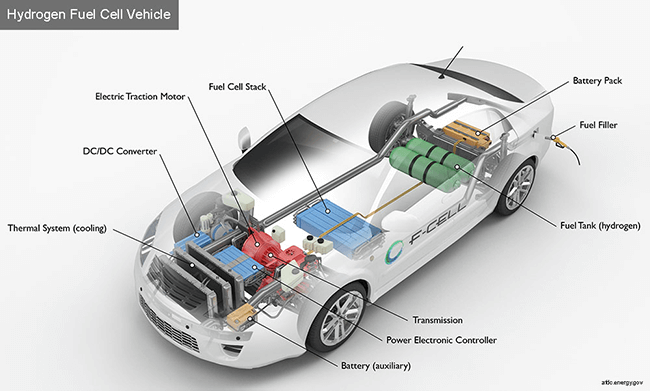 Included in those will be an auxiliary battery that provides electricity to start the car before the traction battery is engaged and powers the vehicle accessories. A battery pack also needs to store the energy generated by regenerative braking and provide supplementary power for the electric traction motor.

A DC/DC converter will convert the power from the traction battery to the lowest voltage DC power required to run the vehicle’s accessories and recharge the auxiliary battery.

Also significant is the electrical traction motor. Using the fuel cell’s energy and the traction battery, this motor drives the vehicle’s wheels. Some vehicles use engine generators that perform both drive and regeneration functions.

Also needed is a set of individual membrane electrodes in the form of a fuel cell that uses hydrogen and oxygen to produce electricity.

An electronic power controller would control the flow of electrical energy provided by the fuel cell and the traction battery and manage the speed of the electric traction motor and its torque.

Finally, to control the operating temperature range of the fuel cell, the electric motor, power electronics, and other components will be handled by a thermal cooling system.

So hydrogen vehicles will continue to absorb large quantities of electronics technology. But is hydrogen truly a viable option when it comes to powering our cars? There are heavily conflicting views on this.

Some industry experts think battery-driven electric vehicles are more power-efficient. Still, advocates of hydrogen vehicles say that lithium batteries are an ecological negative because of the lack of recycling and the use of toxic elements in their manufacture.

In Part II of this article, I’ll look at some of the arguments.

Electromechanical Input Systems – But Which Ones?