On November 15th 2021, the Intel 4004 turned 50 years old, marking the CPU as half a century old. What were the key events that led to the birth of the Intel 4004, and what features did it have? How exactly did its creation alter the planet?

Last year on Electropages, we covered the Intel 4004 turning 49, but this years Birthday has significant meaning as it marks half a century of microprocessor technology. The microprocessor has revolutionised mankind in every field, including industrial, agriculture, defence, research, medicine, and the arts, thanks to its ability to give an application the ability to be programmed, control, and compute data.

Looking at how microchips are used in everyday life, we can easily see why they are so important (aka hindsight), but in 1971 their importance was virtually unknown. This is why Intel creating the Intel 4004 was a stroke of genius, as Intel recognised the potential of their CPU design.

Without getting into too much detail, Intel originally manufactured memory and logic components and was also an industry leader in semiconductor design. Because of this, they were approached by a company, Busicom Corp, to construct a totally custom silicon chip that would act as a calculator device for their latest calculators. Instead of creating a custom chip specifically programmed for Busicom Corp, Intel instead proposed a generic computer design that could be made to execute any calculation. The biggest blunder that Busicom Corp made was allowing Intel to have ownership of the design which resulted in Intel designing the 4000 range of devices, including the 4001, 4002, 4003, and 4004, which combine together to create a generic working computer. 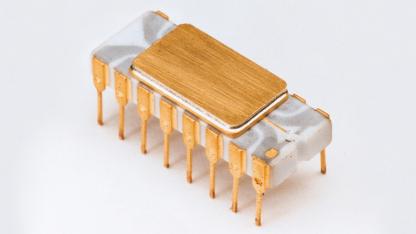 What features did the Intel 4004 have?

The Intel 4004 design was headed by Federico Faggin, who was also the lead architect in the famous Z80 processor. When dealing with the Intel 4004’s features, it’s important to note that it was intended to be used in conjunction with other supporting chips such as the 4001, 4002, and 4003.

The 4001 was a program ROM, the 4002 was data RAM, and the 4003 was a static shift registered used for accessing I/O devices. Modern CPUs use separate address and data lines, but the Intel 4004 heavily relied on multiplexing due to the very small 16-pin DIP package.

One feature of the Intel 4004 that is common amongst many 80s CPUs is a two-phase clock input. These inputs require two clock sources out of phase by 180˚ with no overlap as this allows for using gated latches to store information. However, these can be inconvenient to design for, which is why chips like the Z80 became massively popular (single 5V rail and one clock input).

How did the development of the Intel 4004 change the world?

The idea of single-chip CPUs also led to the development of single-board computers, which triggered the computer age in the 80s. Computers that would cost thousands of dollars suddenly dropped in price so much that almost everyone could afford one. This widespread use of computers saw a generation of tech-savvy individuals create multibillion-dollar tech companies such as Google, Apple, and Microsoft.

But it’s not just personal computers; the Intel 4004 also paved the way for microcontrollers. Unlike microprocessors, microcontrollers incorporate a CPU and all the other supporting components needed to operate the CPU, including ROM, RAM, and peripherals. Cheap microcontrollers found their way into almost any device you can think of to execute specific code (called firmware) that could add advanced capabilities.

Overall, the Intel 4004 has been an incredible gift to the world, and modern life would not be possible without its invention. Happy 50th Birthday, Intel 4004!

The here and now of augmented reality