Recently, researchers from the University of Illinois have demonstrated how the resistance of carbon fibre varies on its orientation, thereby helping researchers better understand the material. Why is carbon seen as a wonder material for the electronics industry, what did the researchers demonstrate, and how could it help our understanding of carbon in electronics?

Why is carbon so sought after in the electronics industry?

Ask any engineer what material has most helped transform the electronics industry, and the almost universal answer is silicon. The refinement of crystalline silicon and the eventual invention of the integrated circuit has changed modern life as we know it. These changes that silicon brought about can be seen in computers that would take up entire rooms and now fit onto a single chip. Communications between two people can now be done anywhere on the planet, and the amount of data processed worldwide is far too enormous for comprehension.

However, ask those same engineers what material will help shape the future of electronics, and many will say carbon. Carbon is already widely used in the electronics industry to create passive components such as carbon resistors, but other exotic forms such as graphene and nanotubes are seldom found.

These more exotic forms of carbon can exhibit some unusual electrical properties, including semiconductivity, high current conduction, high tensile strength, and quantum effects when combined with other elements. Carbon structures such as graphene and nanotubes also express high thermal conductivity, which makes them an ideal candidate for removing excess heat from high-frequencies processors of the future.

To maximise the performance of a material, we first need to know as much about it as we possibly can. The same applies to carbon-based materials; while we know of the properties of carbon and many of its structures, we are still discovering new properties.

Recently, researchers from the University of Illinois demonstrated how the resistance of a piece of carbon fibre varies depending on the orientation of the fibre. However, instead of having a large piece of carbon fibre and taking measurements with an off-the-shelf multimeter, the team used advanced microscopic methods and nanofabrication to create a measuring system.

According to the researchers, the resistance of carbon fibre is significantly higher in the traverse direction (i.e. tangential to the fibre). It is believed that this results from the poor van der Waal forces that form between neighbouring fibres, while covalent bonds that form along the fibre result in a lower resistance. 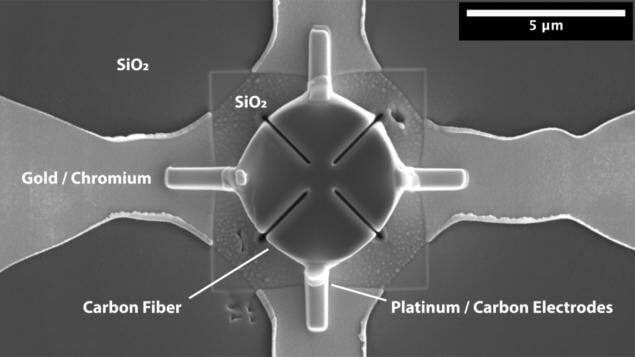 How can this discovery help with carbon in electronics?

Recognising that the resistance of a material depends on the orientation can provide significant benefits when implementing the material into future designs. For example, electrical conductivity is often closely related to thermal conductivity. It may turn out that the thermal conductivity of a carbon fibre sheet can be improved by changing its orientation. Orienting the material differently could also provide a form of greater resistance, which could result in unique electrical and thermal properties.

Recognising the variation in resistance may also be critical in using carbon in semiconductors and other advanced electronics. Material resistance generally decreases performance and results in heat production, and reducing the electrical resistance of a conductive channel or conductor could improve the energy efficiency of a design.

As of now, carbon fibre is still in its infancy in the world of electronics, but the research demonstrated here will undoubtedly help engineers make better use of the material and may even make new discoveries on how it can be implemented into electronics.

China – To Avoid or to Embrace?