Air pollution is a major issue that plagues many cities around the world as it has a detrimental effect on health. What is air pollution, how is it detected, and what role will MEMS sensors play in the future?

What is air pollution?

Air pollution is the particulates and gasses that are generally emitted from human activities including burning fossil fuels in power stations and automotive vehicles (however, air pollution can also be caused by natural events such as volcanic eruptions and forest fires). Examples of what makes up air pollution include soot, carbon dioxide, nitrous oxide, and carbon monoxide. These compounds, once in the air, can take time to dissipate, and it is air pollution that is responsible for smog commonly found around cities (the name smog comes from smoke fog).

What are the implications of air pollution?

Many activists, scientists, and researches urge governments to impose restrictions on factories and power stations from releasing pollutants in the air due to the adverse health effects that it causes. Soot, for example, is dangerous for living organisms as the nano-sized particles can easily be transported into the bloodstream through the lungs, and reach all parts of the body including the brain. This can lead to potential breathing problems (especially those with pre-existing lung conditions such as asthma), brain function deterioration, and cancer. Compounds such as nitrous oxide and carbon monoxide can also cause breathing difficulties due to their ability to prevent oxygen intake via binding to red blood cells. Cities are often the most affected areas for pollution due to their lack of foliage, a large concentration of cars, and a high population density which allows for maximum effect on a population. Overall, air pollution can result in premature deaths, with an extreme example being the Great Smog of 1952 in London which has been estimated to cause as much as 12,000 deaths.

What are air pollution sensors?

Air pollution sensors, as the name suggests, are those that are able to detect either some or all components of common air pollutants. Soot, and other solid particulates, are often detected using an air channel with an infrared LED on one end, and an IR receiver on the other. Outside air is passed into one end of the channel and exists out of the other. The more particulates in the air, the less light that reaches the receiver, and this corresponds to the number of particulates in the air. Volatile gases such as carbon monoxide and sulphur dioxide can be detected using sensors that deploy materials such as tin oxide that are heated and a current passed through them. The tin oxide layer helps to oxidise volatile compounds in the air, and this is detected by the sensor.

MEMS stands for Micro Electronic Mechanical System and are used to create a whole range of different devices including accelerometers, counter-levers, oscillators, timers, and detectors. However, MEMS could find potential application in the detection of air pollution thanks to a team of researchers from Cambridge who have developed a piezoelectric MEMS sensor capable of detecting soot nanoparticles. According to the researchers, unlike typical light-based particle detectors, the MEMS device is capable of detecting incredibly small particles as well as determining their mass; thus gaining insight into the types of pollutants present. The piezoelectric based sensor uses vibration mode-localisation whereby the sensor vibrates at a known frequency, and when nano soot particles fall onto the sensor, the frequency of vibration changes. Such sensors could provide massive benefits to the detection of soot as they offer high sensitivity, good resolution, and high stability. However, the researchers need to determine a method for cleaning the sensors of soot so that the sensor can be reused for new fresh readings. 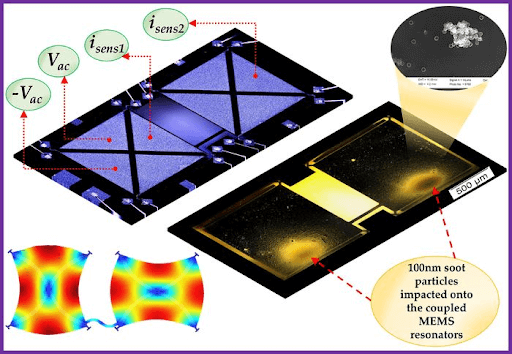 How can IoT and Smart Cities help to control air pollution?

MEMS sensors are often easy to produce making them low cost, and this makes MEMS ideal for IoT applications. Since air pollution is directly related to peoples health and cities, IoT devices could provide smart cities of the future methods for combatting and reducing the effects of air pollution on populations. For instance, IoT sensors placed in key locations around major roads could actively monitor pollutant levels, and if levels become too great, traffic can be diverted via alternative routes. This helps to prevent major roads from generating large amounts of air pollution that will negatively affect those who either live or work on the major road.

The use of IoT and MEMS sensors for smart cities could also help researchers better understand how health and air pollution are related. For example, long term data gathering on air pollution could show potential hotspots, and the relationship between the hotspots and reported health conditions in that area could be examined. The use of IoT sensors in smart cities could also improve future city planning, and show how the position of buildings and roads affects how air pollution gathers and moves in the atmosphere. Such sensors may also provide authorities with traffic monitoring, as well as determining how many old vehicles are being operated.

Overall, the use of MEMS in IoT devices could provide cities of the future with a wide range of information on air pollution, its effects, and how to better manage it.