The Amazon Echo Dot is a smart IoT device that allows for voice control over other smart devices, play music, make calls, and set alarms. In this teardown, we will pry, smash, and rip apart the Amazon Echo Dot to see what components its made of, and some of the unusual design choices.

What is Inside an Amazon Echo Dot? 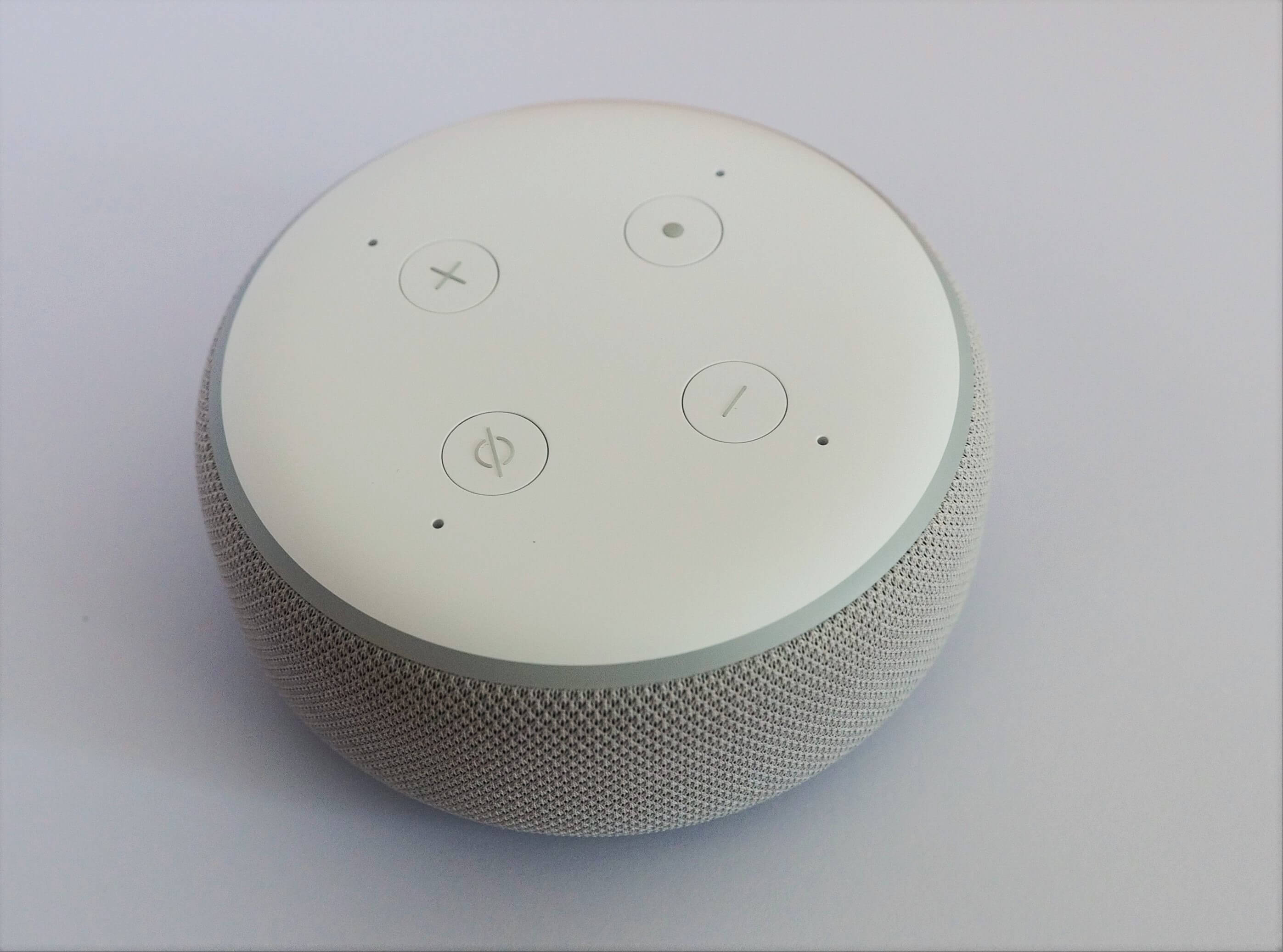 The echo dot in all its glory 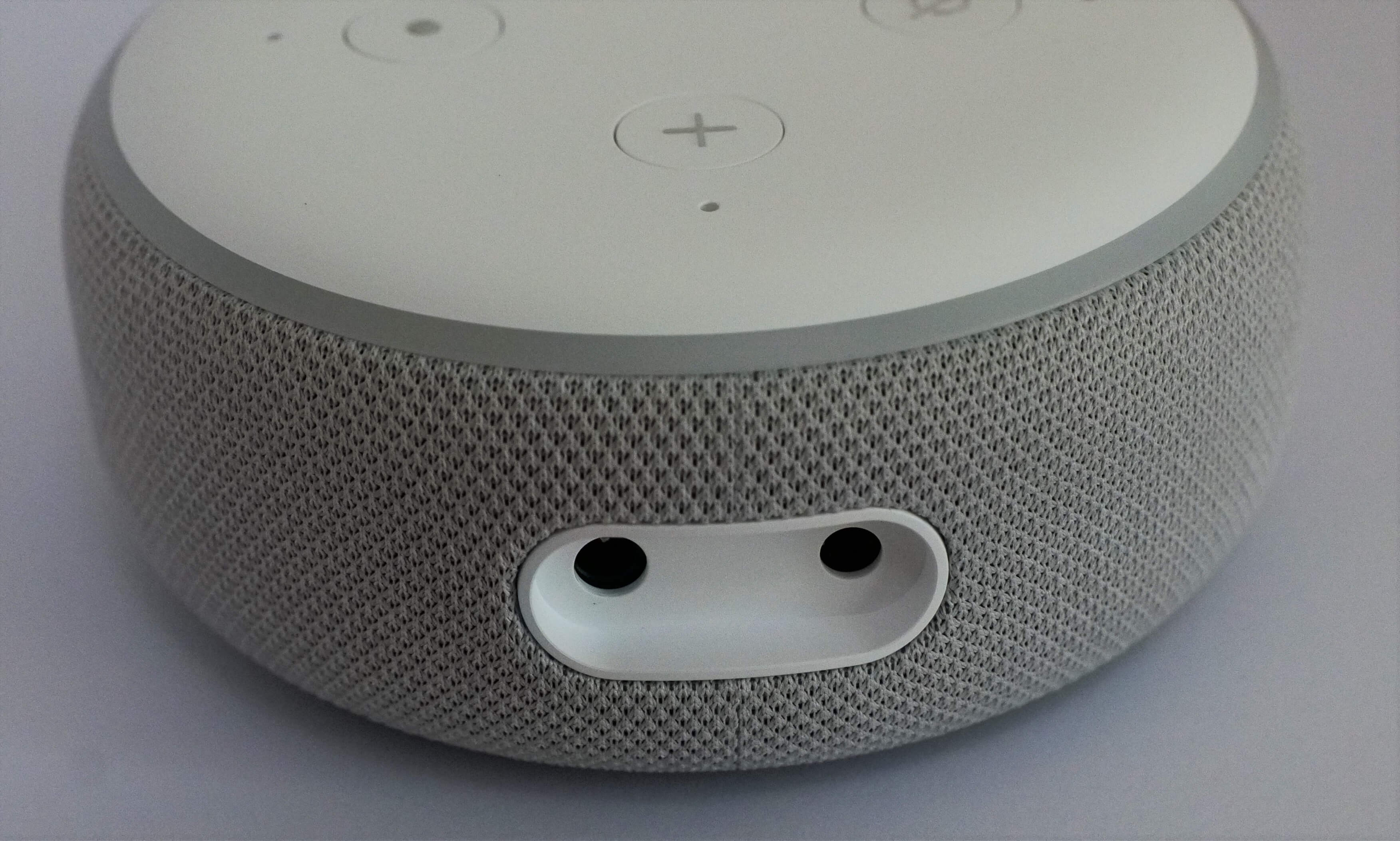 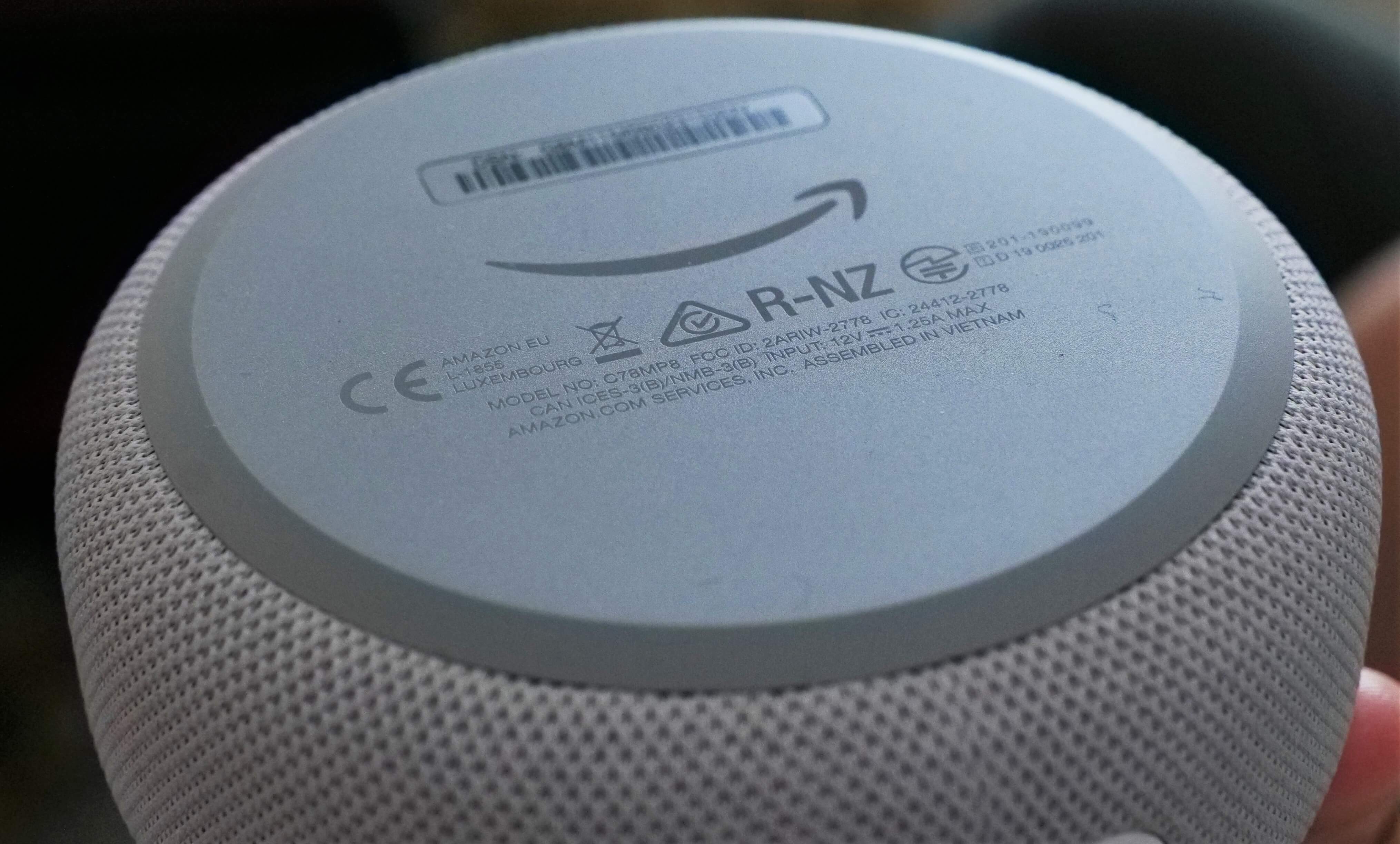 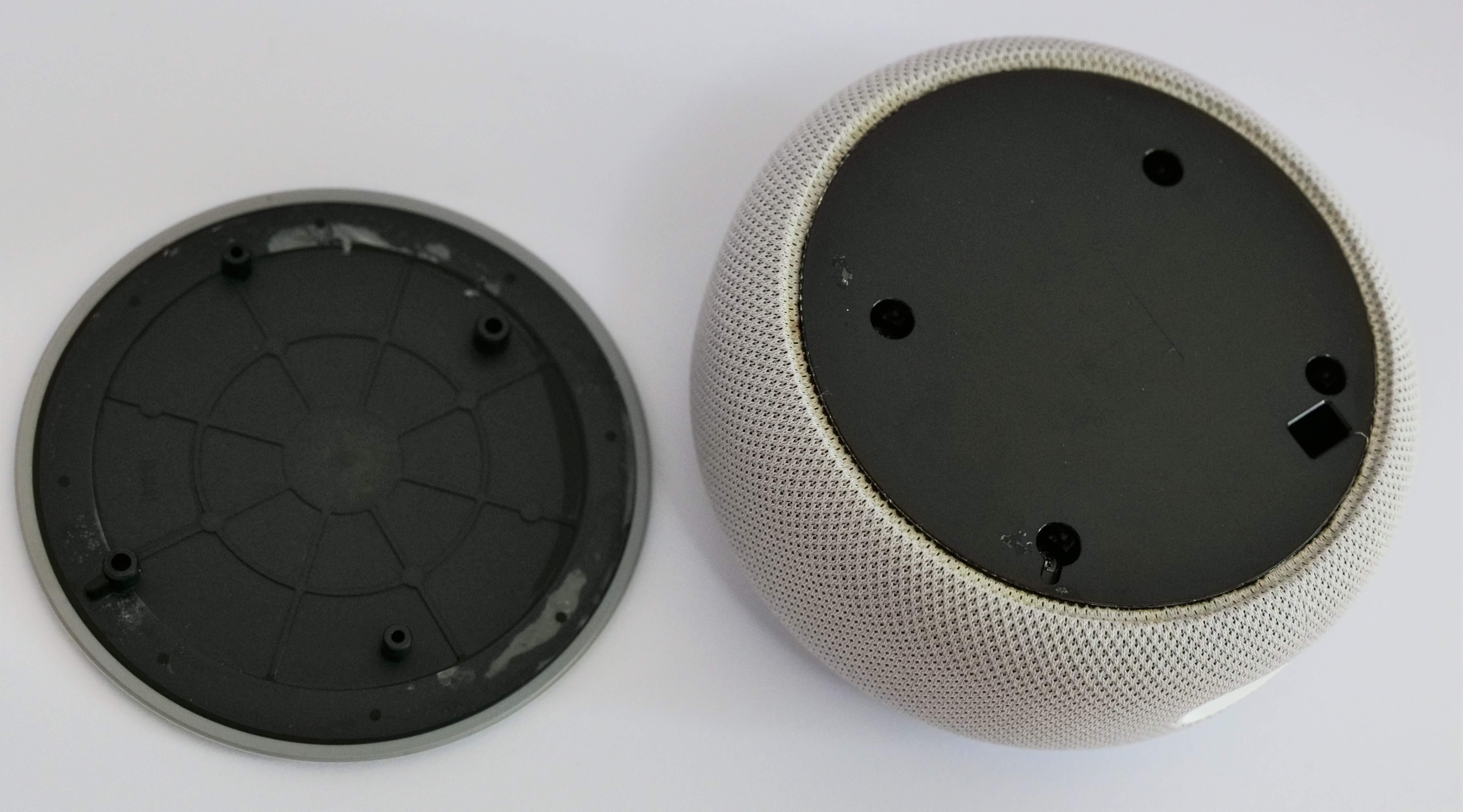 The underside of the echo dot shows what is probably a programming port which has 6 gold contacts. These are often two power pins, a reset pin, data, and clock. However, this could also be a UART port for programming over UART; thus, two of these pins would be TX and RX. 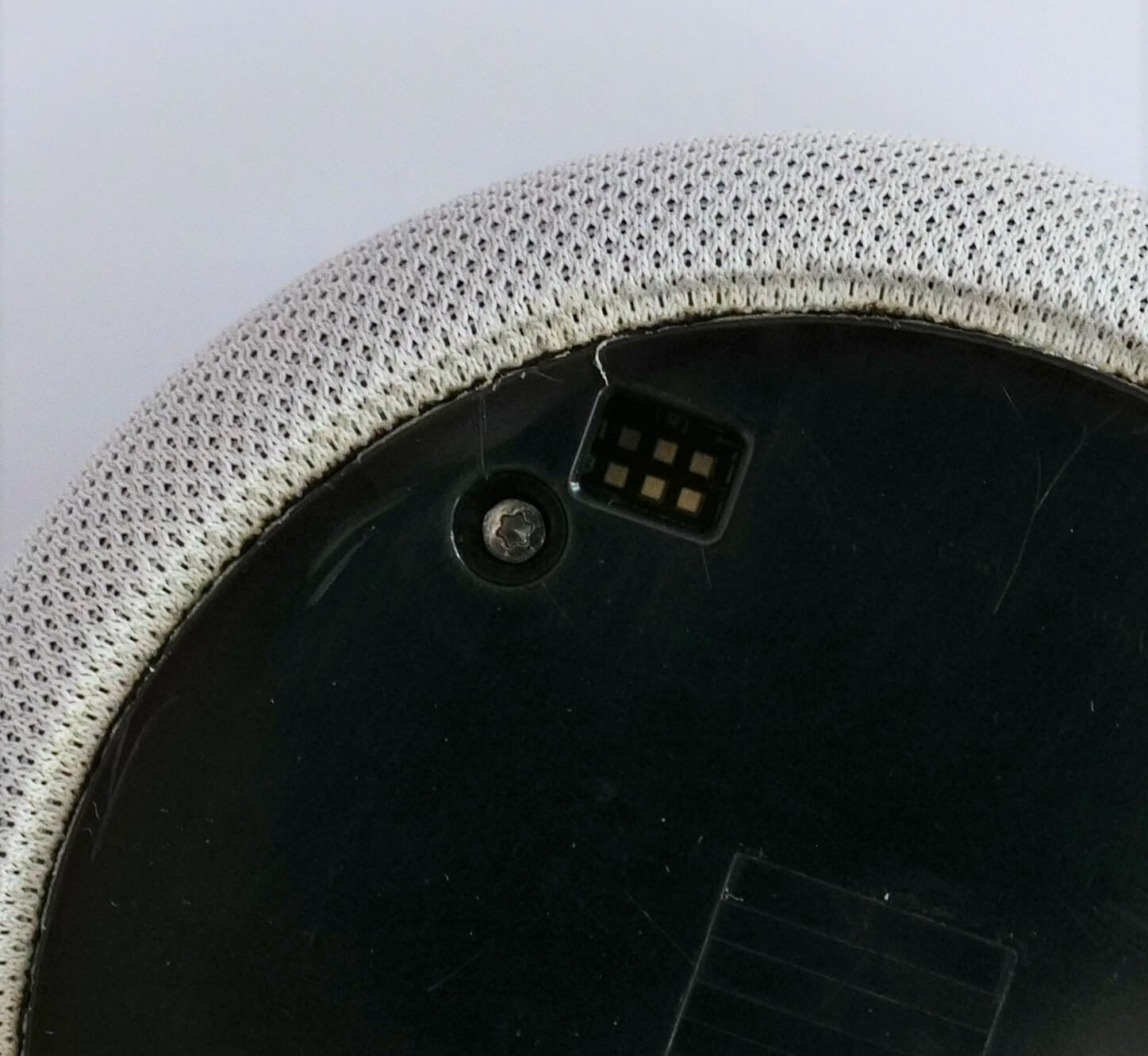 Removing the Amazon Echo Dot Base

Upon removing the base, multiple key features of the dot can be seen. The first is the speaker which is housed in the structure, the main circuit board, and more screws that keep the internal parts in place. One rather interesting feature is the use of an NFC chip on the casing of the echo dot; the echo dot does not have NFC capabilities. This NFC tag may be used for production purposes whereby each device can be tracked as it is manufactured. 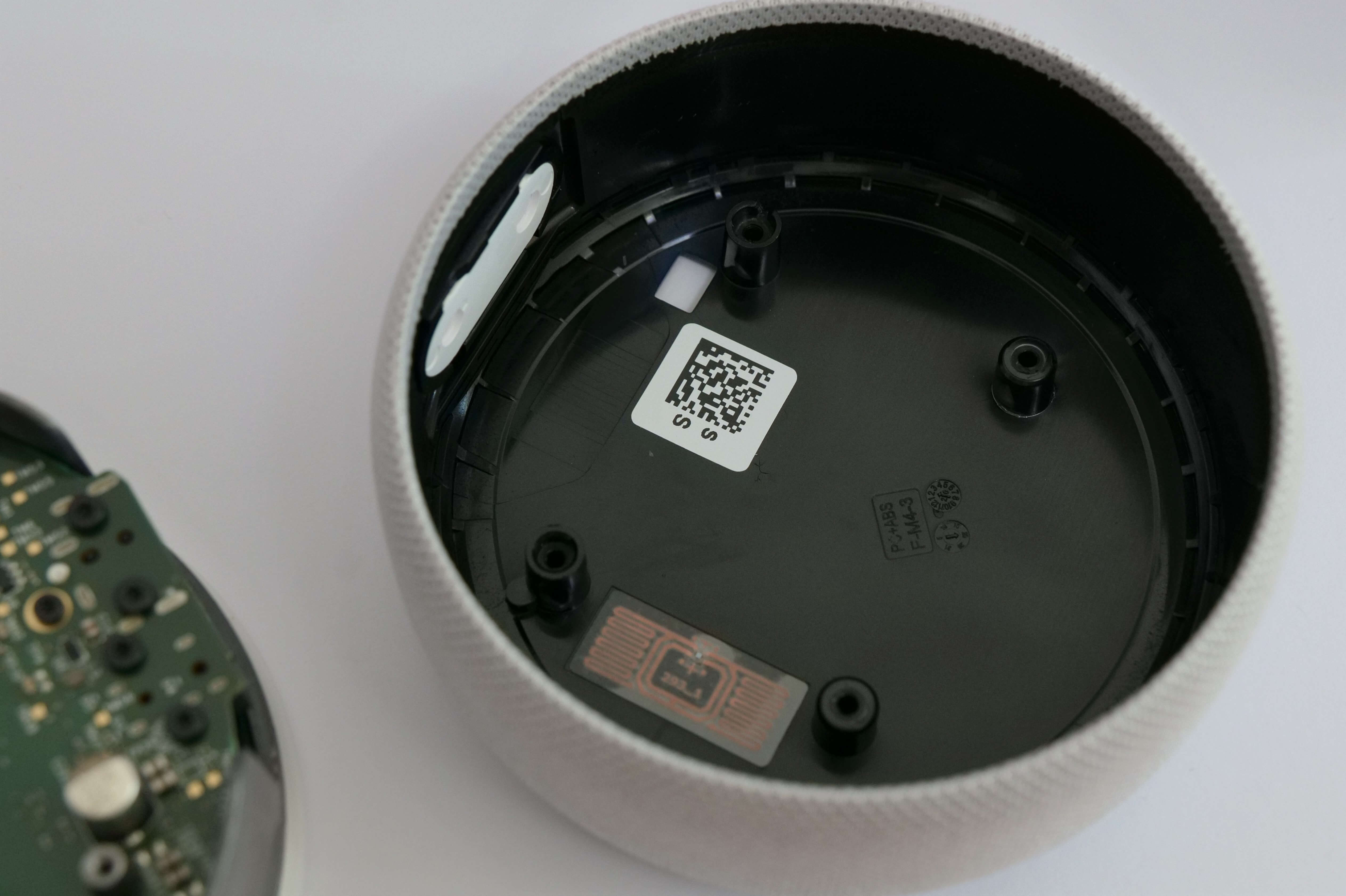 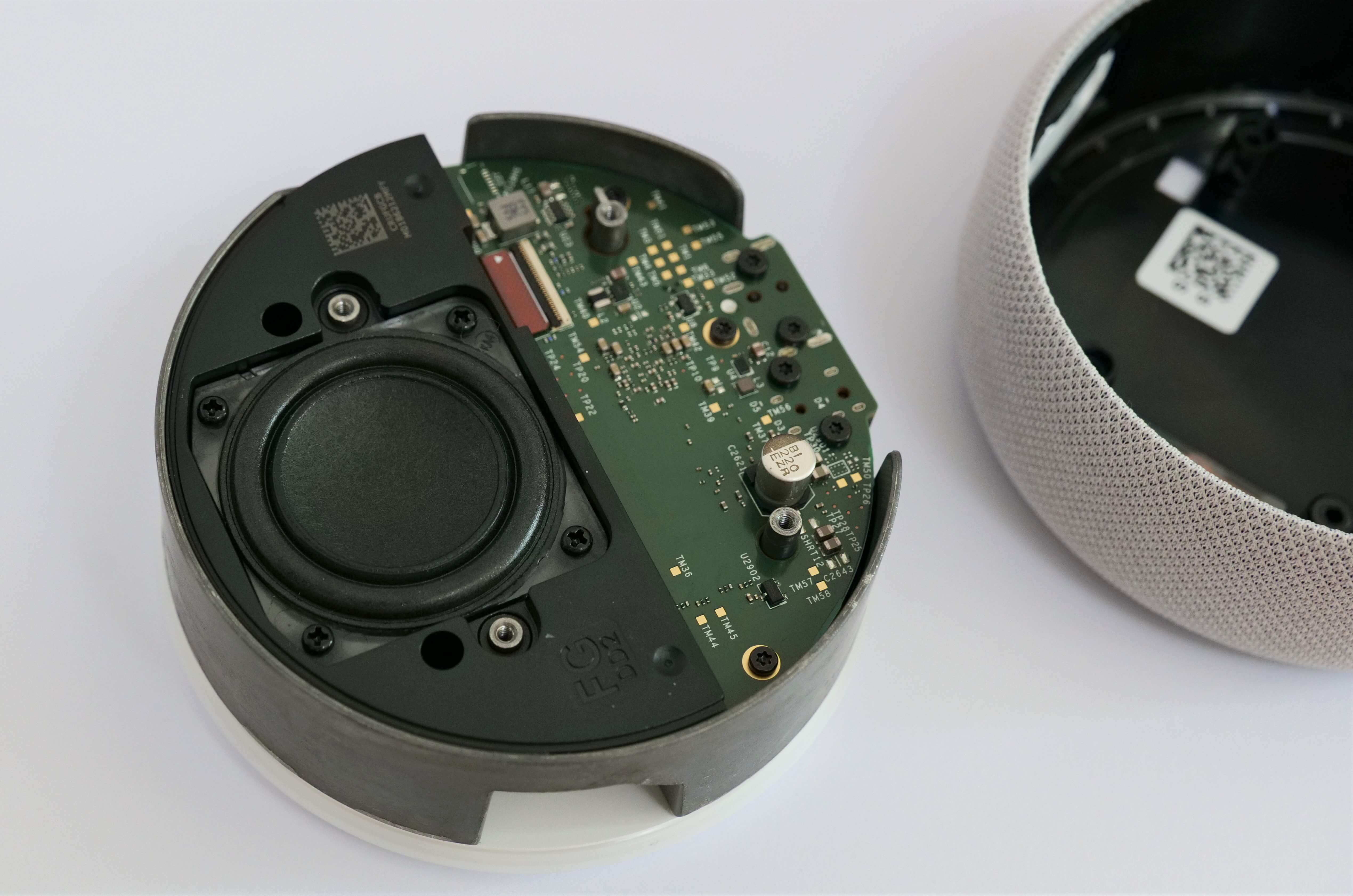 The main PCB can be seen to have a whole range of different supporting components, including resistors, inductors, and capacitors. Many of the resistors on the PCB are so small that they went completely unnoticed during the teardown, and were only spotted when studying the close-up images. 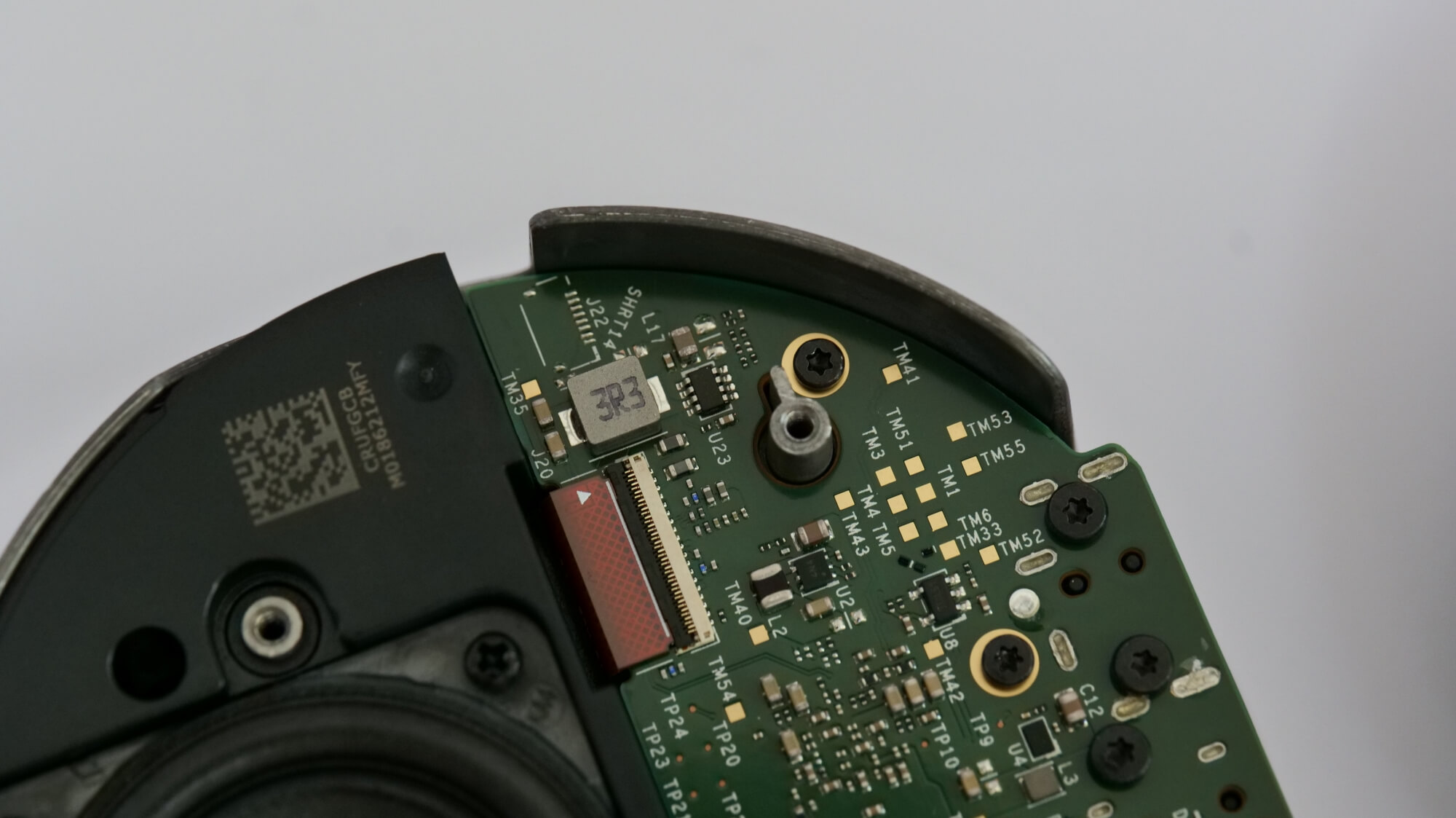 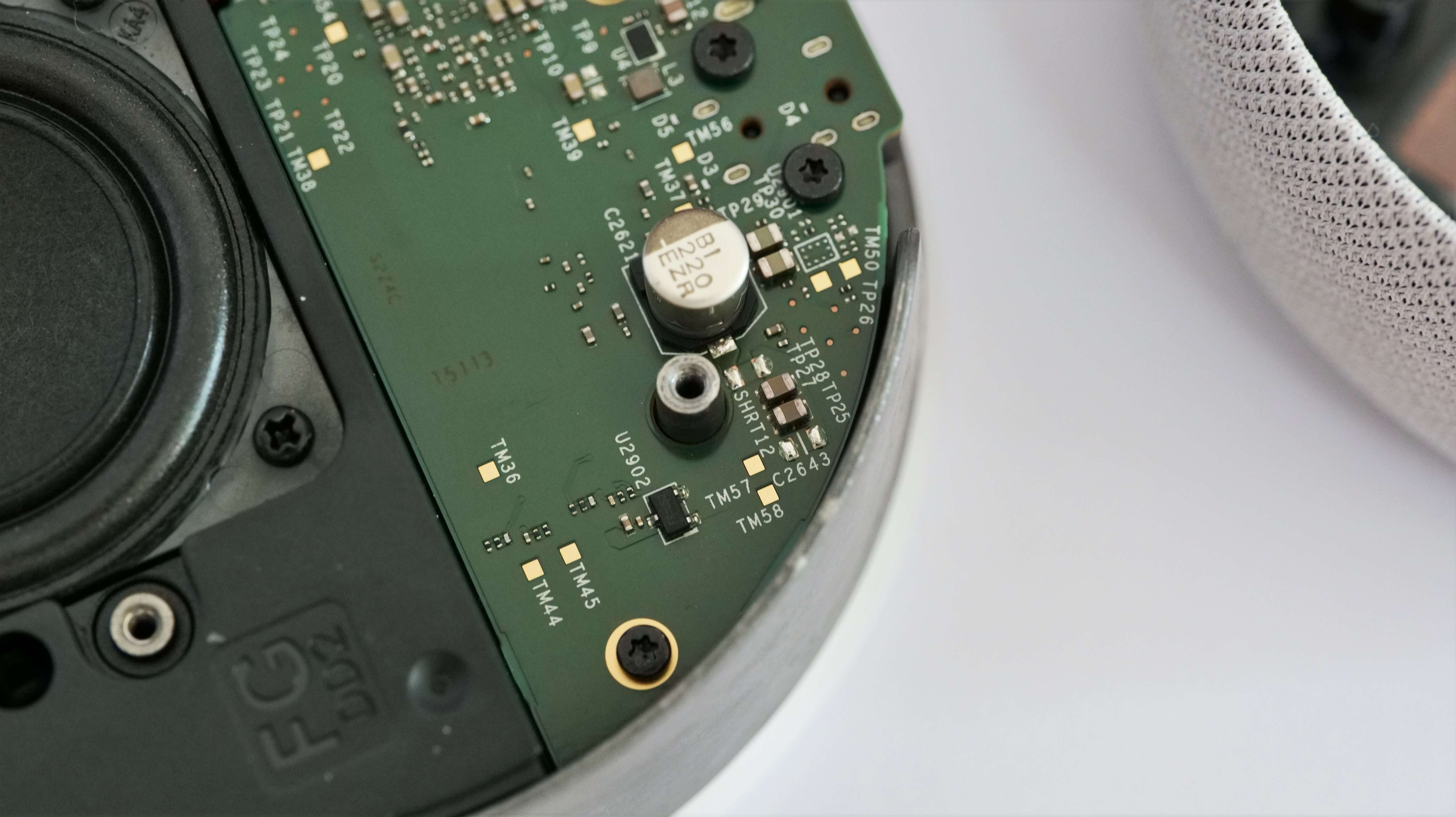 With the screws removed, the first PCB can be removed and reveals key features on the construction of the echo dot. The underside of the PCB shows a large area that is protected under a metal shield (for EMI reasons), and initially, I thought that this is where the Wi-Fi SoC would be located. However, removing the shield reveals that this metal shielded area only holds the main processor and associated memory. The main processor that drives the echo dot is the MediaTek MT8516BAA which is a 64-bit ARM Cortex-A35 MPCore clocked at 1.3GHz, while the two other supporting chips are the NT5CC128M16IP-DIT 2Gb RAM and the TC58NVG2S0HBAI4 8Gb FLASH. 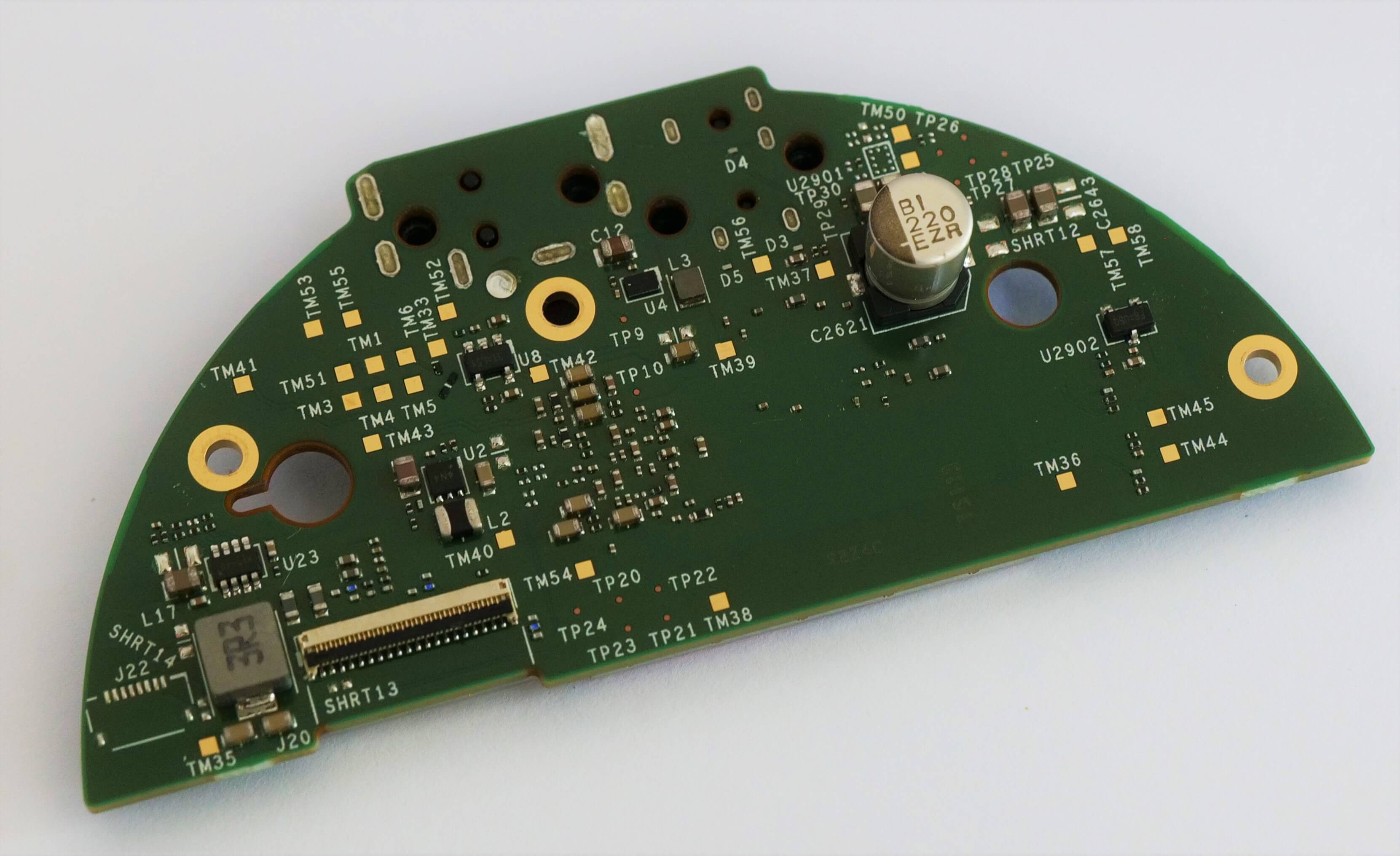 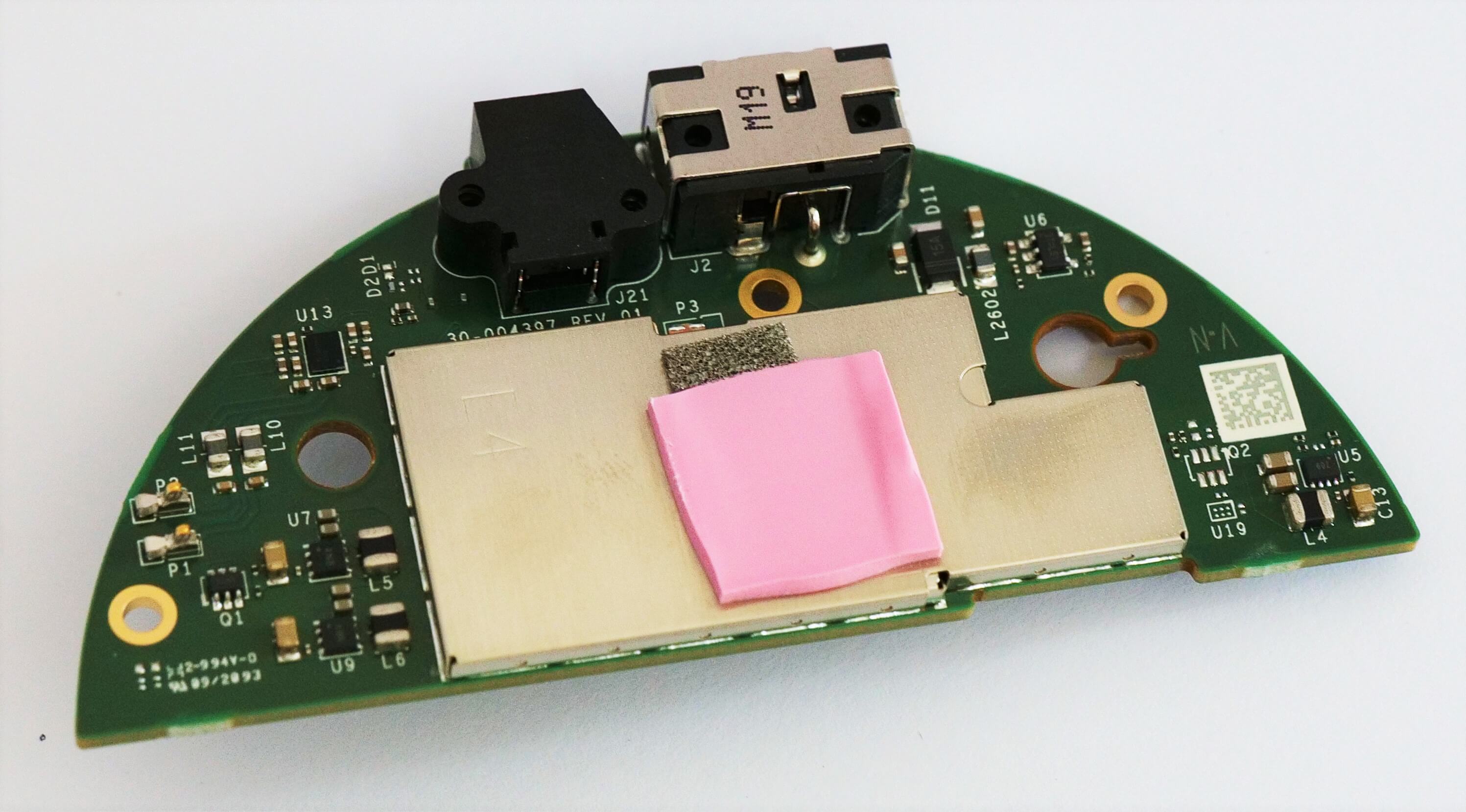 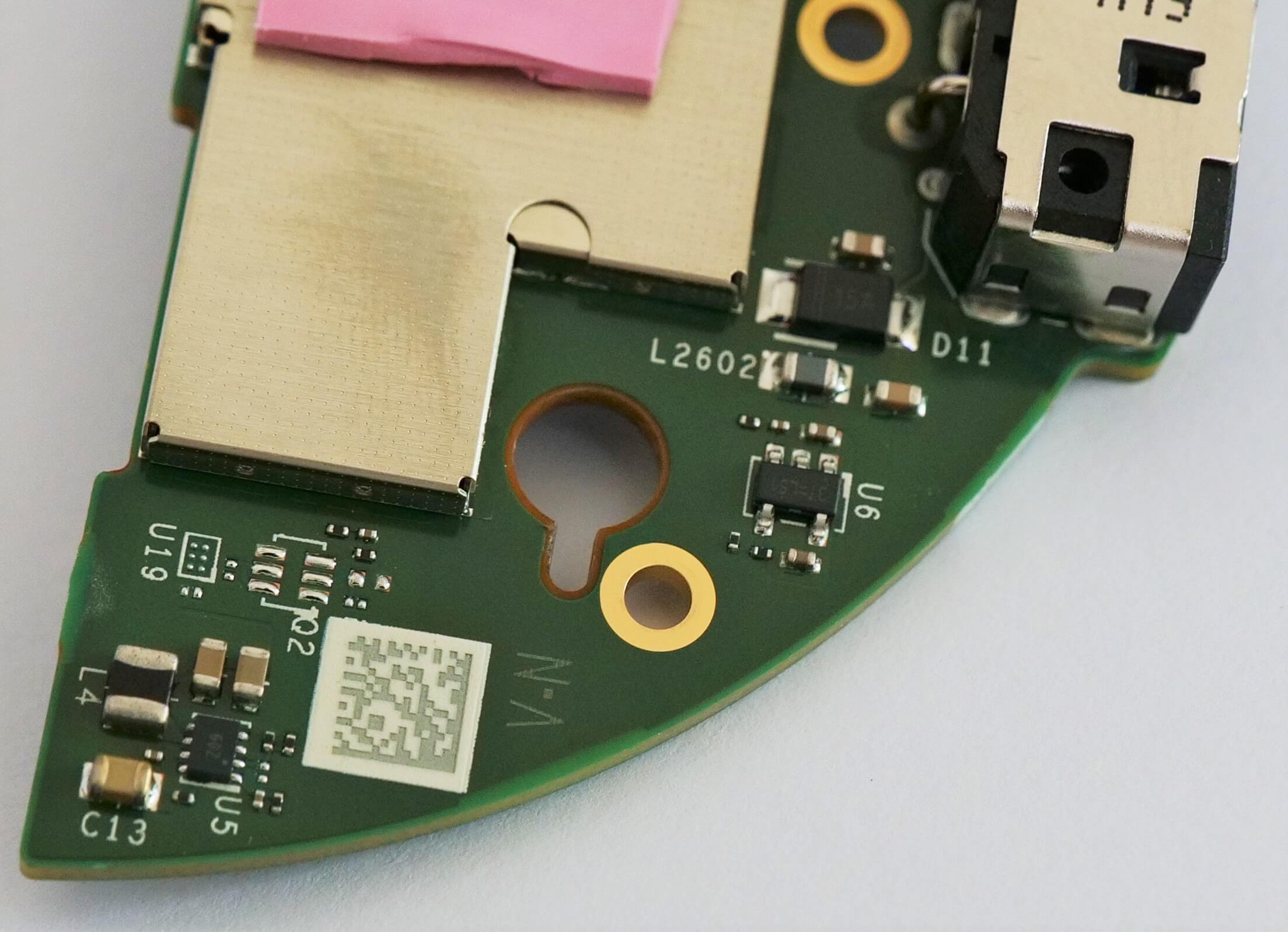 It should also be noted that the PCB makes contact with a pair of contacts moulded into the casing which go to the speaker. However, instead of using a traditional method of wires or connectors, the PCB makes use of small spring-loaded pins that push themselves into the contact pads. 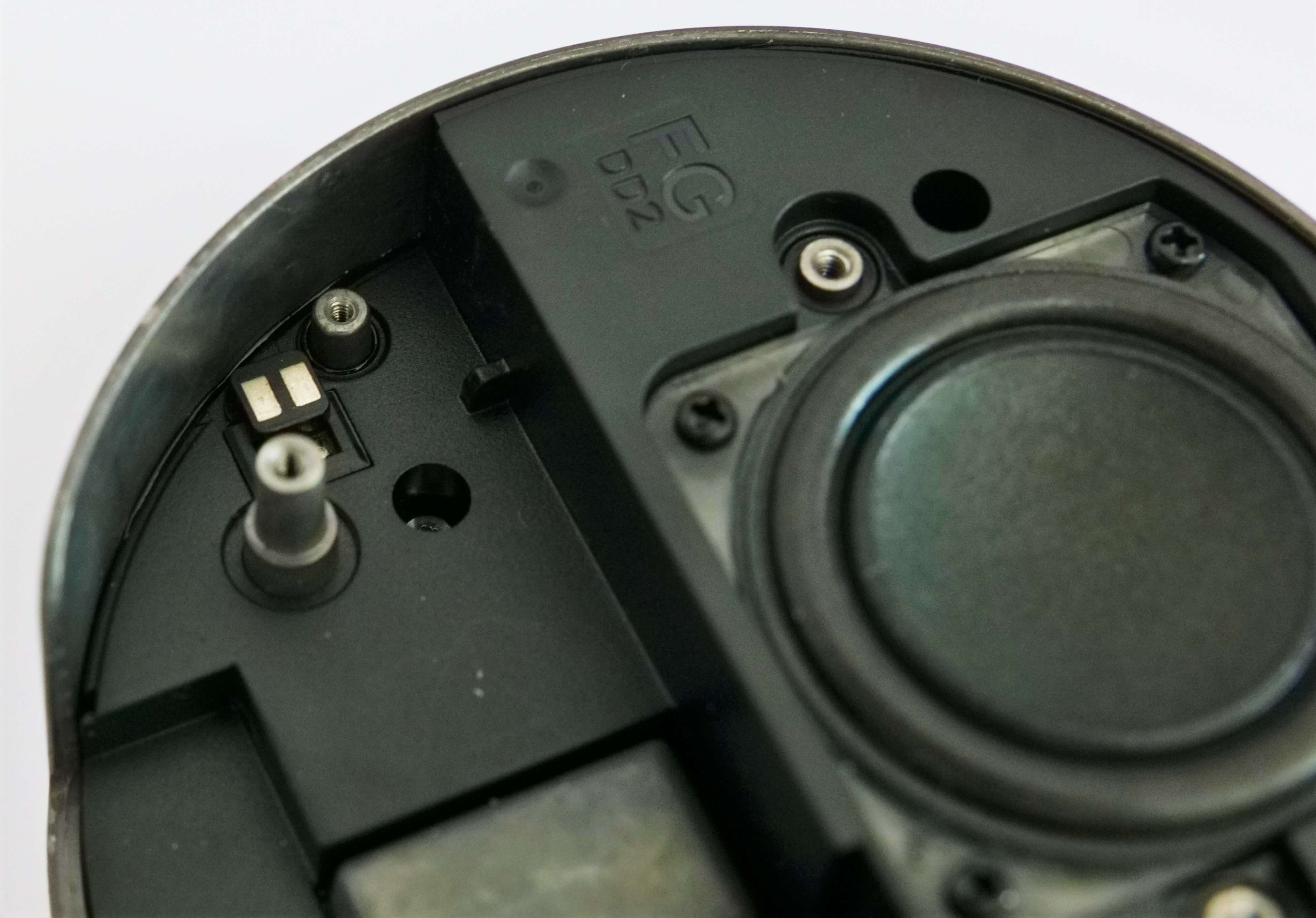 The internal casing of the Amazon Echo Dot is made of metal, and the exact reason for this is somewhat obscure. As many screws are mounted to this casing while also making contact with ground pads on the PCB, the metal casing may be used to act as a Faraday cage to improve EMC performance. This fact is also supporting when considering how the metal shield covers most of the construction, leaving very little gaps. The second theory for the use of a heavy metal casing is to create a product that is dense and hard to move around. If the echo dot is placed on a surface, it should be difficult to move as it is designed to be kept in one place. 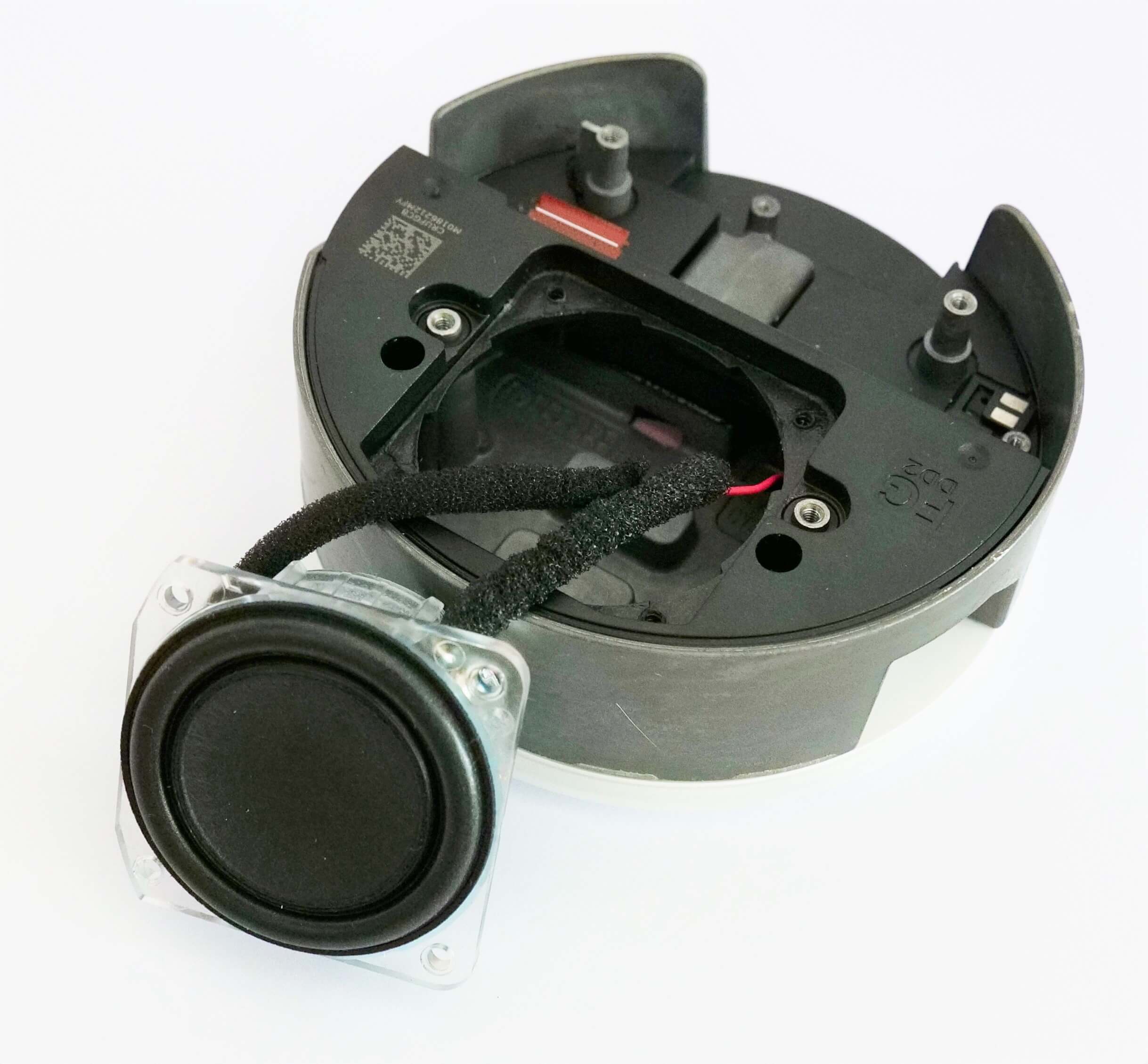 Another interesting feature about the casing is a small plastic cavity that separates the top from the bottom. While the exact function for this is not known, it is suspected to be an air cavity that allows the speaker to operate more easily. Since the top of the speaker is separated from the bottom, the air pressure beneath the speaker will decrease as the speaker moves outwards. This makes it harder for the speaker to work, and either requires more power or the net sound is lower. Thus, the air cavity allows for air to be expanded and contracted with greater ease. 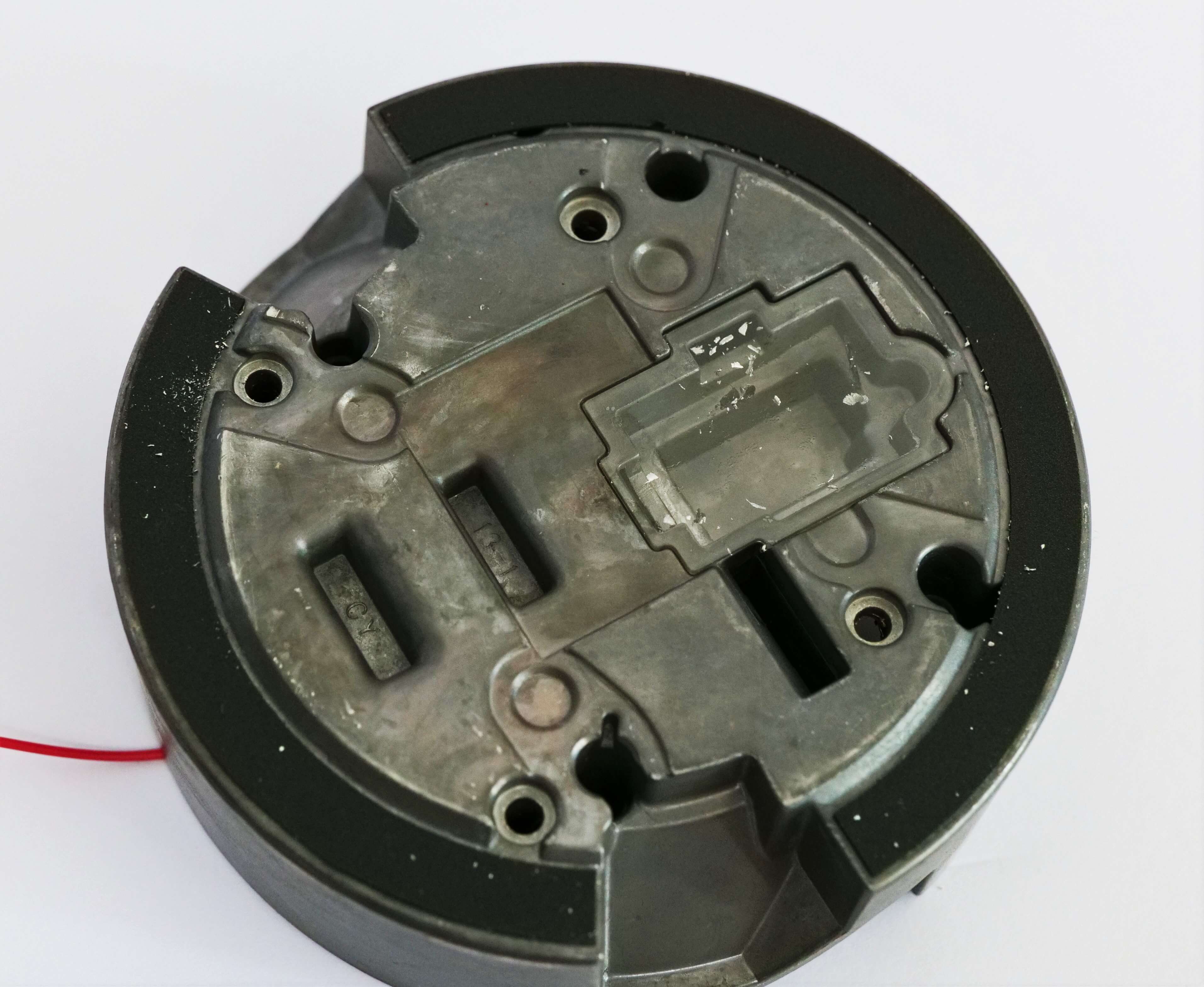 Removing the screws and casing reveals a second PCB that sits at the top and this PCB is attached to the top buttons and faceplate. This PCB also includes a metal shield which houses the wireless SoC, multiple microphones for omnidirectional operation, audio amplifiers, passive components, and spring-loaded connectors that make contact with the metal shielding. 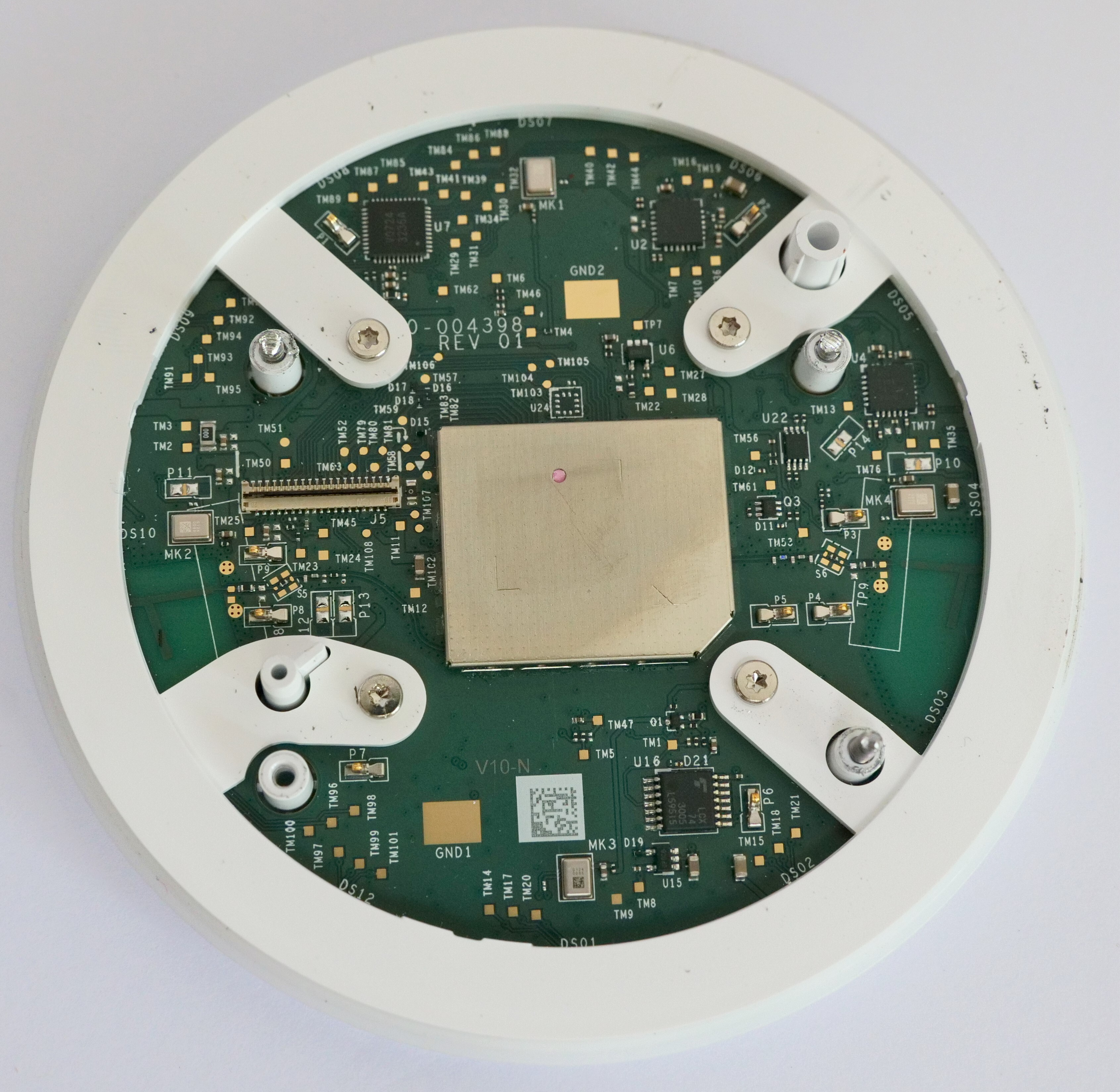 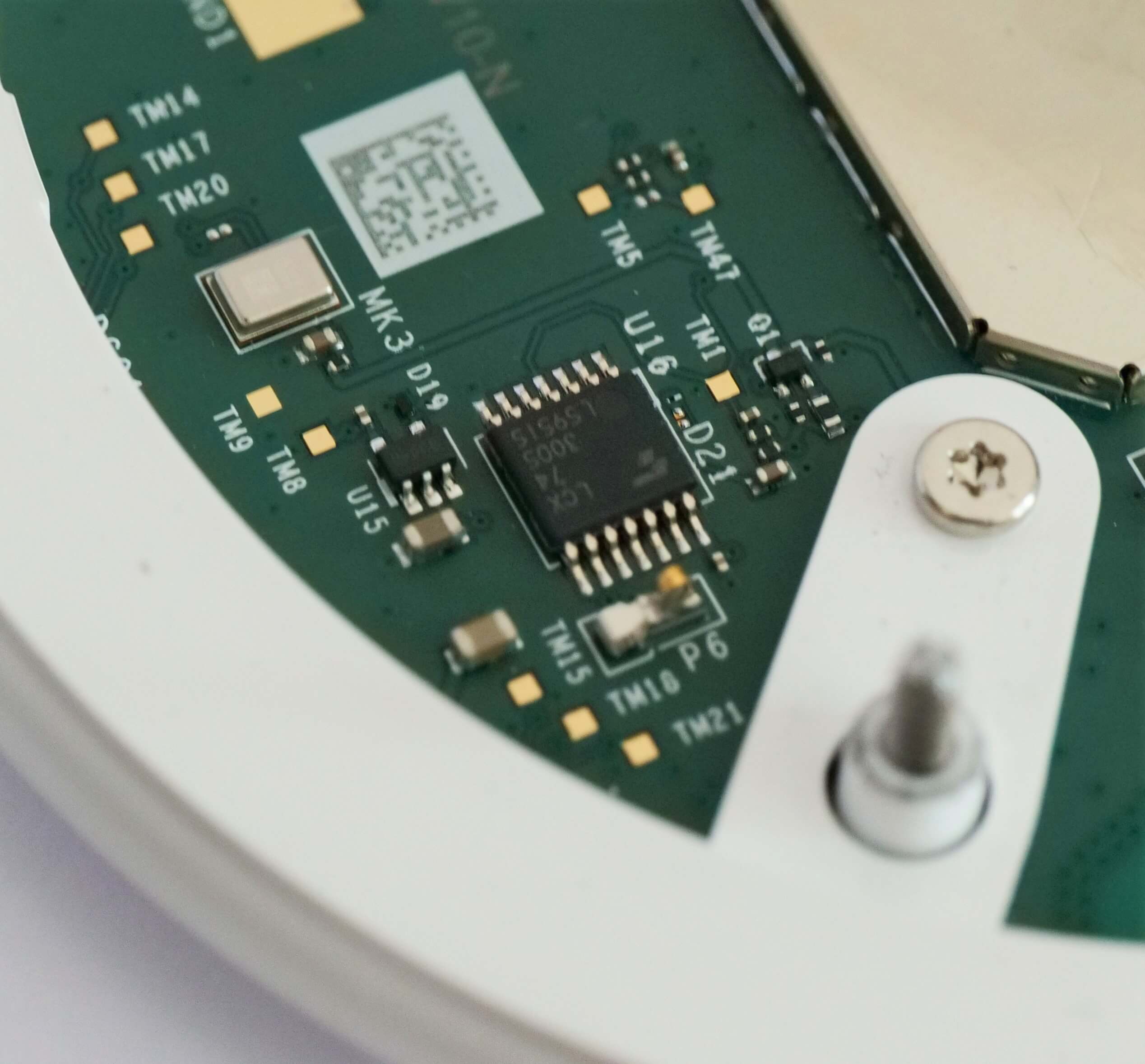 The microphone is the small metal case next to MK3

Removing the metal case reveals the Wi-Fi / Bluetooth SoC responsible for wireless connections. This chip is the MediaTek ARM MT7658CSN which integrates 32-bit RISC microcontroller for implementation of radio protocols, an ARM Cortex-R4, embedded memory, UART, USB, and supports both 5GHz and 2.4GHz. 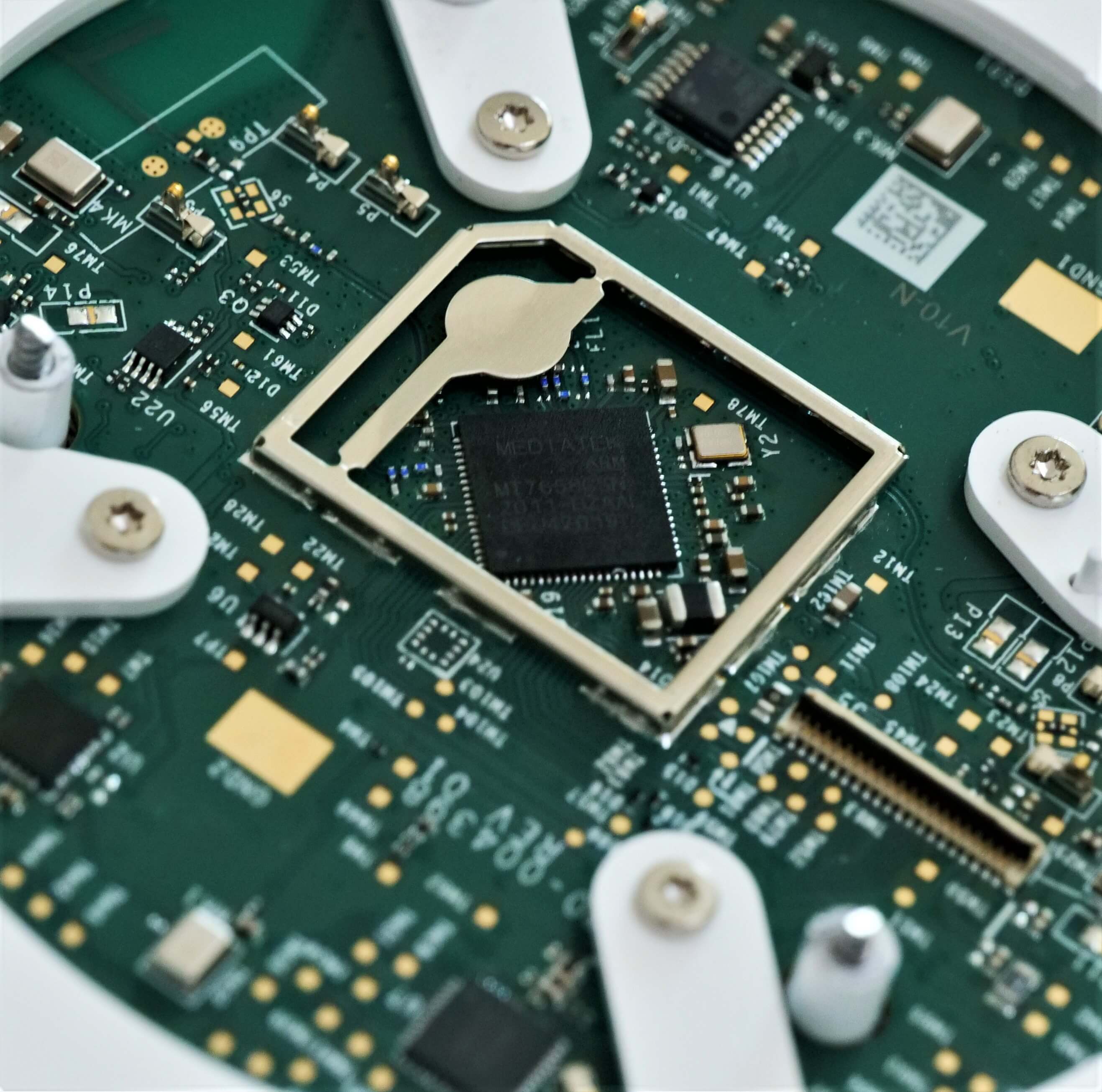 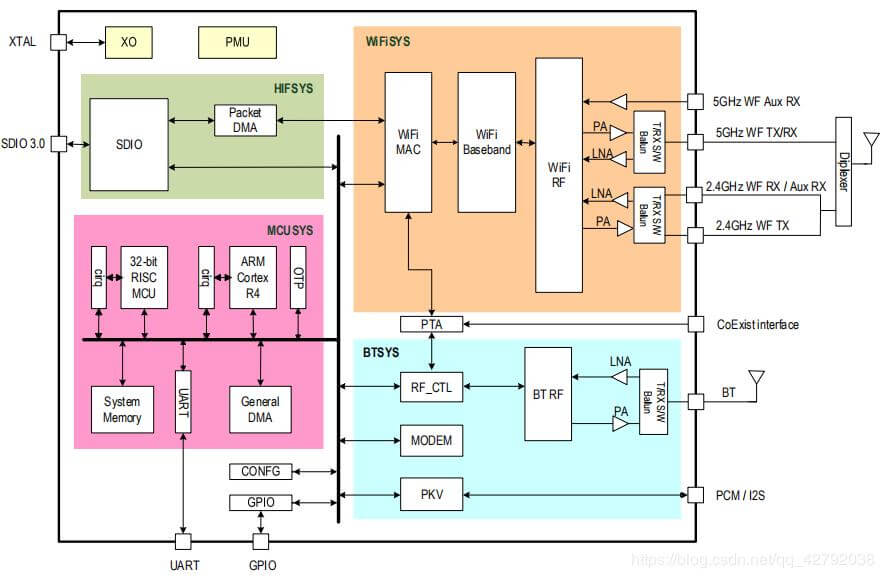 Topside of the Second PCB

The top side of the second PCB is what connects to the buttons on the echo dot, and these buttons are small SMD tactile switches. The top side of the second PCB also includes a foam separator to allow for the buttons to be pushed in, and the plastic buttons utilise a long length of reeled plastic to provide springy action that allows the whole piece to be manufactured in one step. 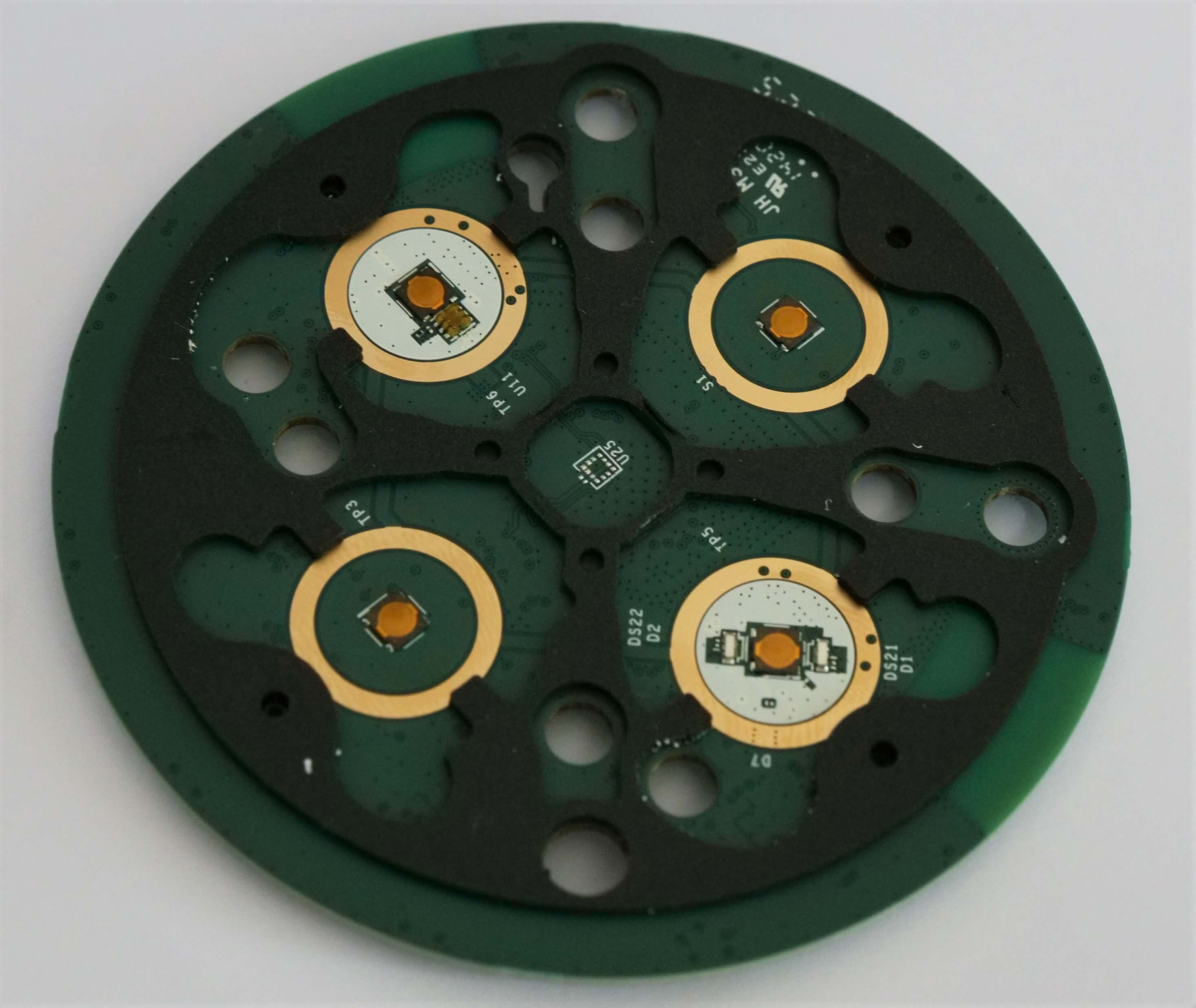 Conclusion - What did we find inside the Amazon Echo Dot?

This teardown shows many manufacturing considerations and tricks, including the use of a single moulded plastic top, plastic cavities for the speaker, and the use of spring-loaded contact to provide connections that are easier to use. However, the large metal shield in the product may serve two simultaneous purposes; EMI and weight. Nevertheless, adding such a complex piece of metal is expensive and something that I personally have not seen in a product before. The use of two separate PCBs is also somewhat interesting, and the Faraday cage surrounding the whole product may be needed because of the use of the flexible connector between the two PCBs. Remember that both PCBs had metal shield over the high-speed digital processors, but the connector, which provides a high-speed bridge between the main processor and Wi-Fi SoC may be exceptionally radiative (EMI). Either way, this was one of the most unique product designs I have seen.