A team of researchers have developed a near-transparent fibre that can be used as a sensor for detecting breathing, sound, and even touch applications. How are these fibres made, how can they be used as sensors, and what applications may they find themselves in?

Why are face masks not entirely effective at preventing disease spread?

While each country around the globe differs somewhat in its fight against the COVID-19 pandemic, one common theme has been the use of masks. Initially, organisations such as the WHO said that only medical professionals should wear masks as they may give users “a false sense of security”, but basic mathematics, as well large amounts of research, shows that wearing masks not only helps to prevent catching airborne pathogens, but can also prevent them from spreading by those who are infected.

However, a chain is only as strong as its weakest link, and the same applies to masks. If a mask is not worn correctly (such as the “chin mask” which prevents one’s chin from getting COVID), then the full effect of the mask cannot be realised. Thus, it is important that during pandemics, masks are worn correctly, which includes ensuring that the mask forms an airtight seal with the skin around the edge of the mask. Another issue faced with the use of some masks is the introduction of surgical grade masks with valves. These devices filter incoming air (when the valve shuts), but then dump the exhaled air through the valve instead of filtering it. Such masks will only provide protection properties against the virus, but won’t protect others from someone who is infected wearing such a mask.

Researchers from the University of Cambridge have developed near-transparent conductive fibres that can be used to make sensors, including breathing sensors, touch sensors, and even detect sound. The fibres are 100 times thinner than human hair, and measure approximately 1um to 3um in diameter while having a light transmittance of more than 95%. The fibres developed by the researchers can be made from either PEDOT:PSS (polystyrene sulfonate), or from silver, and the fibres have a sheath of polyethene oxide (PEO), to act as a protective insulator. Using a 3D like printing method, the aqueous solution used to make the fibres is extruded through a nozzle onto a contact pad, and the application of heat and drawing allows for the fibre to be stretched to the second contact pad. 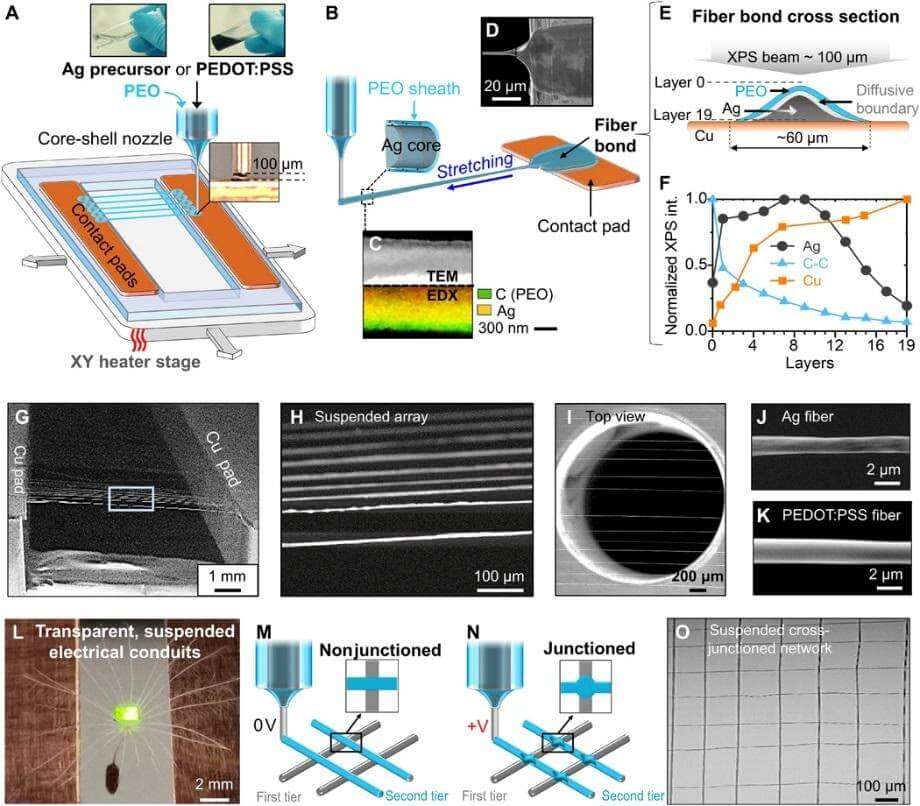 How do these fibres work as sensors?

The conductive fibres, if used in mesh arrays, can detect moisture in the air with their resistance being proportional to the relative humidity in the air. As exhaled breath contains large quantities of moisture (with RH being around 85% to 95%), the fibres can be used to detect breathing cycles. Traditional breathing sensors require the use of expansion and contraction of the chest, which is not ideal for everyday use, and standard humidity sensors take tens of seconds to respond to changes in environmental humidity. The humidity sensor produced by the researchers, however, can respond much faster. While the fibres themselves may not be as accurate in the precise humidity value, they are able to detect fast breathing cycles. 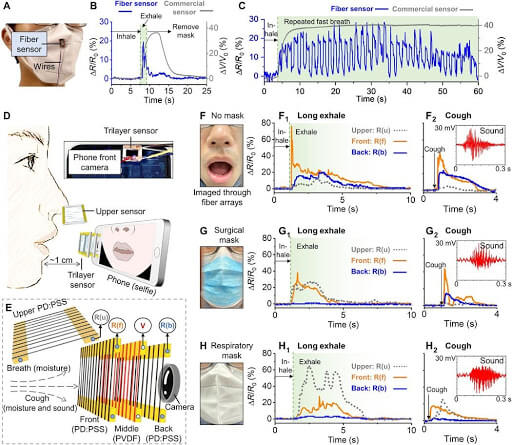 What applications could these fibres help?

According to the researchers, the fibres ability to rapidly detect changes in air moisture can allow for masks to be integrated with smart technologies. Such a mask can detect its effectiveness and whether the users should be warned about potential leaks. Since leaks in a mask are bad both ways (i.e. air can get in and out without filtration), the use of such a sensor can help to protect both the wearer and the general public. The ability to quickly respond to changes in humidity also allows for the fibre to be used as a biosensor for use in medical equipment. The wearers breathing rate can easily be determined, and this can provide insights into oxygen intake, potential illnesses, and general health tracking.

The use of such fibres also opens up the world of wearable electronics to a new method for easily connecting sensors and devices together in woven materials. One of the biggest challenges faced with wearable electronics is the need for easily worn devices that go unnoticed, but most modern electronics is based on ridged, in-flexible components and boards. Such fibres, if integrated into clothes, not only allows for clothing to provide sensory data but also provide connections to various components and circuits integrated into the piece of clothing.