Recently, a team of researchers have demonstrated a range of different inks that can be used to create circuits and multiple passive components. What example circuit was the team able to demonstrate, what makes these inks a crucial step in wearable electronics, and how does it compare to other examples of wearable technology?

What are wearable electronics?

Wearable electronics are those that can be worn on a person. They are generally used to track biofunctions such as heart rate, oxygen levels, number of steps taken, and number of calories burned, but they can also be used to provide general computing such as that found in smartphones. Wearable electronics can be in various forms including wrist-worn, arm-strapped, chest-strapped, and even integrated into socks.

What are examples of current wearable electronics?

While wearable electronics are still in their infancy, several products are available on the market that fall into the category of wearable electronics. The Apple Watch is a wearable watch that provides music and health monitoring activities, while the Fitbit is an activity tracker that can also be used to monitor health. Google Glass is an example of a wearable technology that is worn on the head and overlays information visually including messages and web surfing. Not all wearable technology is in the form of a bulky device, with one interesting example being Siren Socks which can be used to track multiple points on feet for variations in temperature (ideal for use in diabetes cases).

What challenges do wearable electronics face?

Wearable electronics face many challenges due to the nature of electronics. Wearable electronics should be comfortable to wear and go unnoticed; no one wants to wear a large and bulky wrist device. However, most electronic devices in existence are ridged in nature, and cannot be flexed, which is why most wearable technology is ridged (i.e. housed in a solid container). In order for wearable electronics to become more practical, researchers and engineers must look towards flexible materials that exhibit almost organic-like properties. This means every aspect to design must achieve some degree of flexibility, including power, connections, and sensors. However, some aspects to a design can remain ridged, such as a processor, as these could, in theory, be implanted into deeper tissue layers with connectors making their way to surface electronics (however, these would then fall into the implanted electronics category as opposed to wearable electronics).

Researchers develop printable circuits for use on skin

A team of researchers have developed a range of inks that could very well change the wearable electronics industry. Conductive inks have existed for a long time, but the team of researchers have taken this a step further and have produced inks for use with wire connections, dielectrics, and semiconductors. The draw-on ink can be applied directly to the skin, can be applied using a regular pen, and a stencil makes applying the ink trivial.

“It is applied like you would use a pen to write on a piece of paper. We prepare several electronic materials and then use pens to dispense them. Coming out, it is liquid. But like ink on paper, it dries very quickly.” 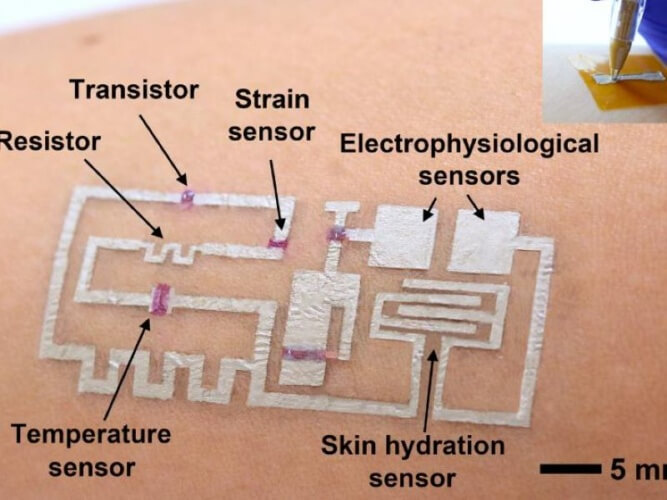 The example circuit demonstrated by the research team integrates multiple components, including a resistor, strain sensor, temperature sensor, electrophysiological sensor, skin hydration sensor, and a transistor. The development of the drawable inks provides a massive boost for medical electronics, whereby patients can have custom circuits applied to them for the use of health monitoring. The use of such a circuit also makes health monitoring comfortable and non-invasive. Such circuitry can also be useful for use in the military where wearable devices can easily be damaged. An additional feature of the inks is that, according to the researchers, can help accelerate the healing of wounds.

The inks demonstrated by the researchers shows great promise in the field of wearable electronics. The use of direct printing methods onto the skin could see the same advances that semiconductors saw; every two years could see the reduction in component size. Thus, in a decade or two, such printing technology could see basic processors printed onto people with the task of essential health monitoring and data reporting to a nearby device using a local radio link or NFC.