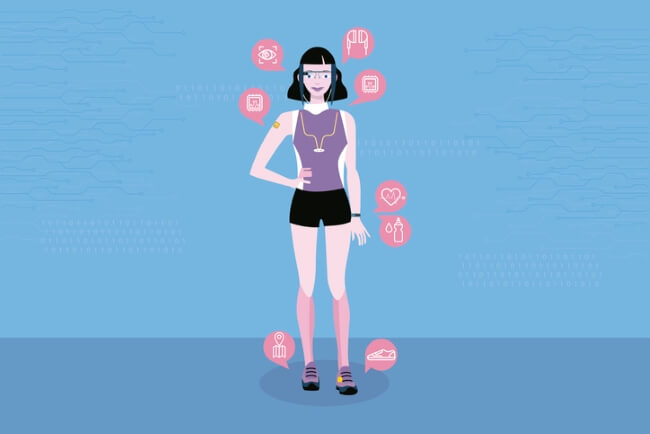 While there is a limited number of these textiles currently available, there is a lot of potential for them to be used in monitoring applications in the fitness and health/medical industries – where the textiles can directly take measurements about the person and relay information that could inform a trainer/medical professional about the best course of action going forward (be it a different exercise regime or a change in treatment).

Wearable electronics are touted to be one of the big electronic application spaces in the future but will rely heavily on the use of nanomaterials – with the main reasons being that no other class of materials are stretchy, conductive and stable enough to be used for long time periods. Wearable electronics rely on many different aspects to function effectively, ranging from a power source (either embedded or a harvesting energy device), conductive connects between components, sensors and monitoring devices (as monitoring is the one of the key uses for wearable electronics), and ways of transmitting the data to an external analysis point (if required).

There has been a big push in recent years into the various aspects of wearable electronic devices. There are now a number of sensors which are made from nanomaterials which are both incredibly small and sensitive, graphene has been used as an effective conduit between devices in some smart wearable textiles and the invention of the Internet of Nano Things (IoNT) now means that data can be transmitted using the smallest of data nodes and router hubs. However, one sticking point in the wearable electronics space (including e-textiles and other sub-wearable electronic domains) is finding ways of harvesting enough energy to power all the components for long time periods without needing to use integrated batteries.

Scientists have turned to nano-sized generators and thermoelectric generators to try and solve these issues, as the ability to self-power could be a huge driver for creating more wearable devices in the near future.

While thermoelectric generators are a good option for various textiles, most are not suitable because they can’t be fabricated beyond a 2D architecture, preventing them from being adopted into the 3D fibre networks found in clothing. However, Wang L. et al have now come up with an innovative way of generating thermoelectric fibres using carbon nanotubes. They then used these fibres as modular building blocks to build a thermoelectric generator within the textile itself to harvest heat from the body and convert it into electricity.

The fibres contain a nanomaterial fibre core wrapped within polymer fibres. The core of the fibre contained three different constituents – neutral (undoped) carbon nanotubes, p-doped carbon nanotubes and n-doped carbon nanotubes – all of which formed regions of defined lengths (and in defined order). The distinct p- and n- doped regions were fabricated through PEDOT: PSS and oleamide functionalisation, respectively, and the carbon nanotube fibres were then wrapped inside acrylic fibres to generate the complete fibres.

After creating the individual fibres, they created ‘loops’ out of them, enabling them to be configured in a number of ways. In terms of the properties of the individual fibres, it is perhaps the high stretchability (up to 80%) strain that stands out, while the electrical and thermal conductivity of the carbon nanotubes is also vitally important.

The fibres are functional because of the architecture they exist in. Using the fibres in loop formations, they created a number of 2D textiles, including warp knitted, woven, and weft knitted fabrics. However, the important factor of these 2D modular fabrics is that they can be fabricated into a number of 3D architectures without losing their power generating capabilities. The 3D fabric collection contained 3D versions of the 2D fabrics, as well as 3D spacer fabric with supporting yarns and 3D spacer fabrics that rely on the elasticity of interlocked bending fibres (with no need for support).

Aside from being flexible, stretchable and robust, the key element of the fibres is that they can harvest electricity from the wearer. The harvesting of electricity relied on the loops being placed side to side so that the p-doped section was always next to the n-doped section, while the neutral section formed the top and the bottom curves of the loops. The ability to generate power is reliant on effective heat flow, and the fibre architecture is set up that heat flows from the wearer into the textile in an out-of-plane direction.

Within the textiles, the differently doped regions are connected electrically in series, and thermally in parallel. At either end of the fibres are electrodes which enable both a hot and cold surface to be attached to the fibres. This is key as the electrodes which touch the body form the hot end and the other side of the textile can form a cold end with the atmosphere (and relies on atmospheric convection). The thermoelectric effect can then take place due to the difference in temperature (especially during physical activity) and the temperature difference enables a voltage to be generated across the fibres – this is because the electron and hole charge carriers in the doped regions travel from the ‘hot end’ to the ‘cool end’, generating an electrical current in the process.

The stretchable nature of both the individual fibres and the woven textiles makes them suitable for clothing applications as they don’t restrict the movement of the wearer. The textiles already show good energy harvesting and power generating capabilities, but it has been stated that they can be improved further. The ability to harvest thermal energy and generate power, while remaining a true textile, could open more possibilities for smart textiles, e-textiles and other wearable electronic devices in the near future, as well as having the potential to be used in portable electronic devices.