Who are Analog Devices?

Analog Devices (also known as Analog), are a manufacturer of semiconductor devices for use in many different applications. Started in 1965 by two MIT students, the first products produced by Analog were operational amplifiers built using discrete parts. Developments in laser trimming lead to Analog releasing the world’s first laser-trimmed CMOS DAC in 1973 and ever since has continued to produce semiconductor products in fields including amplifiers, RF, processors, and DSPs. As of 2017, Analog has over 15,000 employees and operates with yearly revenue of $6.2 billion. 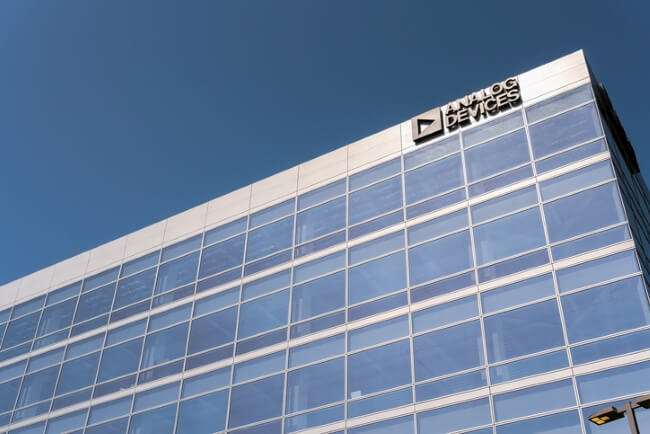 Who is Maxim Integrated?

Maxim Integrated (also known as Maxim), are also manufacturers of semiconductor devices. Started in 1983, the first products produced by Maxim were second-source products which are commonly used devices licensed to manufacturers (for example, the 4000 series is produced by a wide range of different suppliers). In 1985, the company produced its first original product, the MAX600, but it was the release of the MAX232 that helped the company generate profit in 1987. Since then, Maxim has expanded its product range to include automotive, industrial, consumer, and communications markets. As of 2019, Maxim has over 7,000 employees globally, and yearly revenue of $2.31 billion.

Recently, Analog Devices announced that they have agreed with the board of Maxim for an acquisition deal. The deal, being an all-stock buy, is valued at $20.91 billion, and it is estimated that the combination of the two companies will result in a semiconductor company whose worth will be more than $68 billion. The addition of Maxim Integrated to Analog Devices is estimated to produce an additional $8.2 billion in revenue with the idea that a larger company is better than two smaller companies.

One worry that business acquisitions can cause is the conflict in products and services, but fortunately, Analog Devices and Maxim Integrated have little overlap. Analog Devices focus on industrial and medical technology, whereas Maxim focuses on automotive and data centres.

What is an All-Stock Deal?

The acquisition of Maxim Integrated by Analog Devices is in the form of an all-stock deal. When any company is acquired, shares must be bought from the current shareholders. In some cases, this can be done with cash, but in an all-stock deal, shareholders are given new shares in the parent company instead. This allows companies to protect cash, and allow for acquisitions that a company would not usually be able to afford. Such a deal does carry risk as share prices can fluctuate with the resulting merged companies having lower share values (however, this is generally not the case).

Analog Devices acquiring Maxim Integrated is something that the semiconductor industry has seen a lot of in the past, and will continue to do so. While some sectors work fine with large numbers of small companies, others tend to favour fewer larger businesses. This is generally the case in industries where the scale of production is immense as no single small company can produce the number of devices needed. Analog and Maxim are both famous companies but are low when compared to companies such as Intel. Intel, being the size it is, is capable of producing enough CPUs for the entire world, but Analog Devices could struggle to meet the same demand for a commonly used product. The combination of Analog and Maxim increases the overall revenue and market share, meaning that the two can afford to research more into new products, increase production capabilities, and identify products worth investing more in. For example, Analog and Maxim both sell power-related ICs which are found in many products, but the combination of the two may see a single power IC that gives engineers less choice. But the use of a single power IC means that they can be produced in bulk, thus providing designers with a lower cost. The result is that larger semiconductor companies are more likely to be successful, and have greater reach.

"Sorry officer, but I blame a glitch in my cruise control software"