Particulate matter in the air has been a severe pollutant since the industrial sector started to become a big industry in the 1700s. It is known that many different manufacturing and industrial process, the burning of agricultural waste in some countries, and the incomplete combustion of petroleum products in vehicles are significant polluters of the air we breathe. Many of these processes are vital for modern-day life. However, the presence of pollutants in the air is a significant issue in many parts of the world, as many cities and countries are covered with thick blankets of smog (which is a smoky haze containing large amounts of solid particles in the air held together by moisture) daily.

The presence of smog in our cities can be seen in the likes of China, India, Kazakhstan, and South East Asia, where the combination of large manufacturing and agricultural industries both contribute to high smog levels in the region, as does the growing number of vehicles on the roads. Such polluting effects pose a substantial public health hazard as the smaller particles (named PM 2.5) can easily penetrate deep into the lungs and cause respiratory issues, and this is why many people have to wear smog masks regularly in some cities.

Air pollution is becoming a more significant issue in the modern-day as the higher temperatures being seen around the world (due to global warming) are exacerbating the effects of smog, and the presence of more and more polluting industries (especially in countries with less stringent environmental regulations) is causing a global health issue. So, naturally, scientists are not only looking at ways of detecting these harmful air pollutants but are also finding ways of removing these particle-based pollutants out of the air.

Pollution at the PM 2.5 Level and Below

PM 2.5 is the category where air particulate matter is 2.5 micrometres in diameter or less and below this is the nanoparticle range. PM 10 is the other category and is concerned with particles between 2.5 and 10 microns, but particles PM 2.5 and below are the real issues due to their small size. Particles which are either at the nanoparticle or PM 2.5 level pose the most threat as the small size can penetrate deeper into the lungs upon inhalation, which in turn can cause more severe respiratory issues in the short and long-term.

When it comes to air pollution, a lot of filters and tests available to the general public focus on the 2.5 PM particle size classification as they are much easier to detect and remove than nanoparticles. However, while many of the pollution levels focus on PM 2.5 and PM 10, more care should be taken to analyse and extract the nanoparticle sized air pollutants because their small size and active surface area mean that they tend to stay suspended in the air longer than particles of a larger scale. So, a combination of longer suspension times and deeper lung penetration factors are why nanoparticle pollutants in the air – such as transition metal oxides, inorganic salts and organic carbons –was listed as one of the top four risk factors contributing to death and lifespan in China in the Global Burden of Disease Study in 2017.

Removing Nanoparticles From the Air

Researchers from Chengdu in China, led by Guo-Hong Tao, have created a self-powered air filter that can remove PM 10, PM 2.5 and nanoparticulate matter from the air. The active filter part is made up of an ionic liquid polymer composite material which is irregularly distributed on top of a melamine-formaldehyde resin sponge network and requires a low voltage to operate. The filtration system showed a high efficiency towards all types of particulate matter, removing more than 90% of all particles in the air – with 99.59% PM 10, 99.75% PM 2.5 and a 93.77% removal of nanoparticulate matter. This is a very high removal efficiency for all the classes of particulate matter, especially the nanoparticle range. 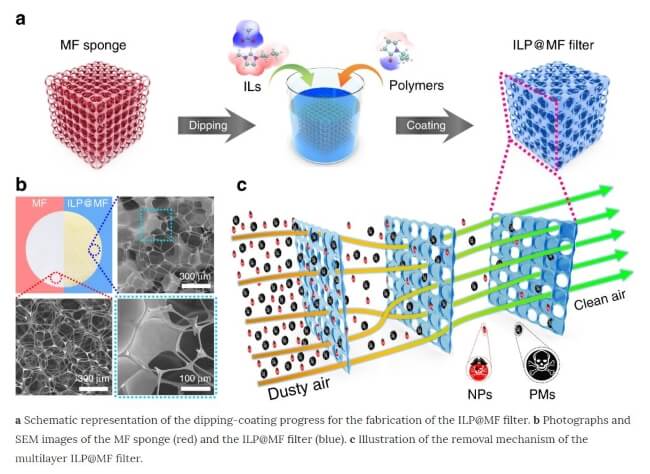 The fabrication method and purification model of ILP@MF filter.

The polymer material is irregularly distributed on top of the resin sponge as this creates channels within the filter which the polluted air can flow through. The ability for the air to move through the sponge channels reduces the pressure inside the filter, allowing more particulate matter to be removed from the air. The filter itself collects the particulate matter from the air by generating a high electric field (which is why a voltage is needed, but only a small voltage is required to generate a large electric field), which causes the moisture-held particles to move to and adhere to hydrophilic (water-loving) channels, thus removing them from the airflow.

The power for the electric field was generated using a micro button lithium cell battery or a silicon-based solar panel, allowing the filtration system to be self-powered and therefore placed into areas that don’t have their power source- like face masks, which the researchers also created using the active filtration material. The face mask created by the team could be turned on and off via a switch depending on how polluted the environment the user is in (i.e. to conserve power and service life if in a low smog environment where the enhanced filter is not necessarily needed)

As it stands, the self-powered air filtration masks that the researchers created would cost more to manufacture on a large scale than the filtration masks that are currently on the market (as many can be produced cheaply due to the large scale need for such masks). However, the filtration properties of these masks are significantly better than the commercially available masks. For some people, the extra protection will not be of interest, but for those who are in such polluted environments for extended periods (or live in such environments), they could become a good option for providing better long-term health benefits – especially if the cost of the masks came down due to demand and the ability to produce in large quantities.