In April, California based synthetic biology startup Zymergen launched ‘Hyaline’. It describes the product as a revolutionary new film for electronics applications. The new film co-created by Zymergen and its development partner Sumitomo Chemical Inc., is expected to pave the way for more sustainable, biologically produced products within the coming year. Hyaline has already been successfully been used in flexible circuits, display touch sensors and printable electronics. However, the new film merges the benefits of advanced bio-fabrication with traditionally generated materials. “Hyaline film truly shows differentiated and sustainable performance with respect to optical and mechanical properties that have not been available before,” said Richard Pieters, President of Products for Zymergen.

Zymergen CEO Josh Hoffman continued, “We believe that our biological innovation will have a transformative effect on people’s welfare. For the last hundred years, industries have largely relied on petroleum-based manufacturing, but we’re leading a new wave of innovation by reimagining how materials are produced through biology. Today we’re not just announcing new materials – we are making a promise that in 2020 consumers will begin to see, touch and use new products inspired by nature.” Key advances for Hyaline include: touch sensors; optical filters, where the thinner film with high temperature properties will enable faster processing times in manufacturing; and printed electronics.

Meanwhile, in March Zymergen acquired enEvolv the Boston based creator of engineered commercial products based on microbial genomes. The acquisition, writes John Cumbers founder of SynBioBeta, establishes a combined platform that promises to speed up R&D in biomanufacturing. Zymergen will use enEvolv’s ultra-high-throughput technology to screen and select individual cells from among millions, finding those rare cells with just the right genes and properties needed in biomanufacturing applications. enEvolv says it can do in a single month what would take 30 of today’s high-speed robots 2,000 years to do. “This partnership crystalizes our long-held belief that the combination of high throughput genome engineering, powerful technology, and new approaches to material science will push the biological manufacturing revolution into the mainstream,” says Colin South, CEO of enEvolv.

In March, researchers at MIT announced the development of a new way of making polymers adhere to surfaces that may enable better biomedical sensors and implants. Explaining the development the team said, “Polymers that are good conductors of electricity could be useful in biomedical devices. But there has been a sticking point preventing their widespread use: their inability to adhere to a surface such as a sensor or microchip, and stay put despite moisture from the body.” MIT’s new adhesive method involves an extremely thin adhesive layer between the conductive polymer hydrogel and the substrate material. “Though only a few nanometres thick (billionths of a metre), this layer turns out to be effective at making the gels adhere to any of a wide variety of commonly used substrate materials, including glass, polyimide, indium tin oxide, and gold,” says MIT. The coating is made of polyurethane, though other similar polymers could also be used. The result is a mechanically strong and conductive gel that bonds tightly with the surface it’s attached to. “It’s a very simple process,” MIT says.The bonding proves to be highly resistant to bending, twisting, and even folding of the substrate material.

A paper in the February edition of the nature research journal, Nature Communications, written by a team of researchers led by Shanghai based Shuo Chen, highlights groundbreaking work done by the team in the preparation of mechanically and biologically skin-like materials (PSeD-U elastomers). “In recent years, soft, and flexible skin-like electronic devices have attracted more and more attentions and become a novel platform to integrate with soft tissues for human–machine interaction, health monitoring, and medical therapies,” say the authors. Development in this area is needed, explains the research, because “despite the rapid progress in the capability and miniaturization of integrated circuits technology...electronics using rigid substrates and brittle components lack of biocompatibility and biodegradability, result in mechanical mismatch and complications in the contact areas between the devices and the surrounding tissues.”

Skin’s two major components are collagen and elastin fibres. And it remains a challenge to develop elastic materials with a suitable combination of nonlinear viscoelasticity, toughness, softness, and stretchability to mimic skin’s mechanical properties. Some elastic materials, such as poly (dimethylsiloxane) (PDMS), polyurethane, polystyrene-block-poly (ethylene-ran-butylene)-block-polystyrene, have been used to fabricate stretchable electronic devices. However, these elastomers cannot mimic the mechanical properties of human skins and generally have high elastic modulus and low toughness. The research reports on a design that incorporates the physical hydrogen bonds and the covalent crosslinks to form a unique hybrid crosslinked networks. The PSeD-U elastomers were successfully synthesized and demonstrated their skin-like mechanical properties as well as biocompatibility and biodegradability with potential in bio-integrated electronics. To demonstrate the application of PSeD-U elastomers for bio-integrated electronics, the team fabricated the piezocapacitive pressure sensor based on a microstructured PSeD-U20-12h elastomer dielectric film. Gold was selected for the electrodes due to its biocompatibility. 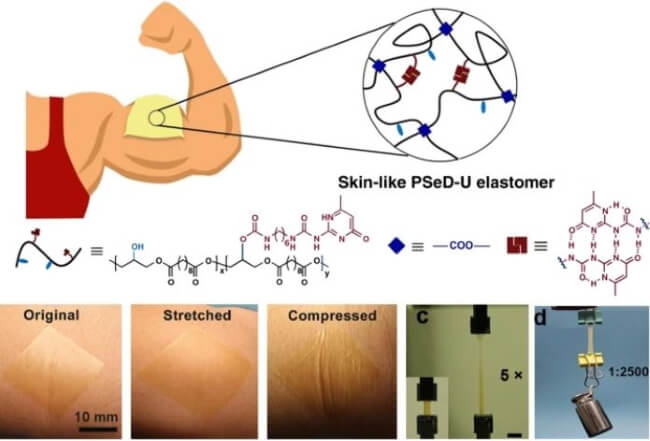 According to a recent report from Verified Market Research, the global bioelectronics market is projected to reach $10.21 billion by 2026, growing at a CAGR of 10.72% from its 2019 valuation of $4.5 billion. The market is expected to benefit from increasing advancements in surface chemistry and in semiconductor technology related to man-made devices and the interface of biology. Advancements in devices and technologies will enable applications in the areas such as prosthetics, disease detection, and disease prevention. The development of nano-scale electrical measurement devices are also expected to boost the growth of the market.