Could Bismuthene Offer a Way to Reduce CO2 Emissions in the Future?

Climate change has manifested as a worldwide, man-made issue and unless measures are put into place in the near future, it is likely that the world will continue to see temperature rises, erratic weather systems and further melting of the polar ice caps. There are a number of factors that have contributed to global warming and climate change over the years, but one of the biggest issues has been an over-production and over-emission of carbon dioxide gas. While the natural state of the Earth does fluctuate the concentration of carbon dioxide and greenhouse gases over time, excessive amounts are causing the dynamics of the world to change at a much quicker rate than the natural fluctuation.

Over the years, a number of solutions have been devised to counteract and reduce the concentration of carbon dioxide (and other greenhouse gases). One of the ways of reducing the amount of CO2 entering the atmosphere is to break it down catalytically via the electrochemical reduction reaction of CO2 (CO2RR) method.

The CO2RR reaction is as a useful way of breaking down CO2 as it produces valuable products in the process, in the form of formic acid (HCOOH) and formate (HCOO–), which are useful reactants in other chemical processes. These reactions have typically relied on electrodes composed of bulk metals to produce the by-products in an aqueous solution. Of all the different metals trialled, bismuth has a much lower cost and higher stability, making them much more commercially viable than other metals.

Over the years, a number of bismuth-based forms have been trialled, including bismuth nanowires, bismuth nanotubes, single bismuth atoms and bismuth nanoparticles to name a few, but many have suffered from low current densities and large overpotentials. So, in an effort to utilise bismuth, Weilin Xu et al have used bismuth in its 2D form – in a material known as bismuthene.

Bismuthene and the 2D Material Family

The 2D materials family is a class of ultra-thin nanomaterials that have manifested since the discovery of graphene back in 2004. Graphene is by far the most known, but the similar structure between graphene and other 2D materials – as well as some similar, or equivalent, properties – has generally contributed to them being defined as their own material class. 2D materials are inherently thin and can be anything from a single atomic layer to a few atomic layers, depending on the specific material.

2D materials come in many forms, from uniatomic materials such as graphene (all carbon) and phosphorene (phosphorus), to diatomic materials, such as hexagonal boron nitride (boron and nitrogen), to the tri-layered species known as the transition metal dichalcogenides (TMDCs) which include molybdenum disulphide (MoS2) and tungsten disulphide (WS2) as well over 100 more different materials. Bismuthene is also a 2D material and is a part of the uniatomic materials because it is formed completely of bismuth atoms arranged into a 2D nanosheet. The range of applications that 2D materials are being trialled and used in is vast (and constantly growing), so they are class of materials that are on many people’s radar in the tech and electronics space. 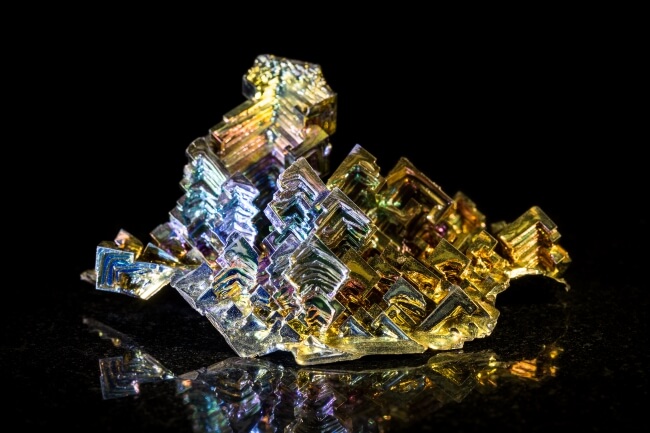 Bismuthene is one of the harder 2D materials to synthesize, but it is also less studied. So, as more research into the applications of bismuthine emerges, it is likely that researchers will also look at more effective synthesis and production methods. While a free-standing sheet of bismuthene was produced by the researchers, it took a combination of experimental and computational calculations (density functional theory) to determine the catalytic potential of bismuthene towards carbon dioxide.

Using Bismuthene as a CO2RR Catalyst

As a catalyst, bismuthene seems to be much better suited than many of the other bismuth allotropes. However, this is not surprising as many 2D sheets are catalytically active due to possessing a very active surface (or in many cases, being an active surface with no depth). One of the interesting points that the researchers found is that the thickness of the bismuthene sheet altered its catalytic activity. This corresponded to the thinner the bismuthene sheet, the better the electrocatalytic activity, which is partly due to a higher number of active sites on thinner sheets as well as faster electron transfer rates.

It was found that the catalytic activity was the best on the (111) crystallographic plane of the atomic lattice due to the presence of a compressive strain that led to the end (formic acid and formate) products forming more readily. In short, this meant that carbon dioxide reactants didn’t adsorb too strongly on the surface, enabling the converted products to be desorbed easily. The other faces were found to be more susceptible to holding intermediate species and are therefore poorer catalytic planes. The high selectivity towards the end products enables the reaction from carbon dioxide to product to occur more easily, therefore carbon dioxide can be converted quickly when passing over the catalyst.

In terms of the specifics, the researchers found that the bismuthene electrocatalyst had a high Faradaic efficiency of 99%, a low overpotential of less than 90 mV and a high durability. Compared to the other bismuth-based CO2RR electrocatalysts, bismuthene has a much better catalytic activity towards carbon dioxide and looks like a promising avenue for further exploration.

Looking to the Future

It may be a while before we see the use of bismuthene in a commercial setting, but as this is an initial study at the very beginnings of application exploration, the results look very positive. While it is not possible to create bismuthene at scale, yet, the methods used to produce the catalysts in this research were simple wet chemical methods from bismuth (III) chloride, so are much more scalable than many of the methods used to produce other 2D materials. So, while it’s not an immediate consideration, they could become one of the many different strategies in development in the future for reducing the amount of carbon dioxide emissions entering our atmosphere by employing them before the carbon dioxide reaches the atmosphere, e.g. in the emission pipelines/flues of industrial plants.