Pharmaceuticals is a big business globally, although there are pockets of the world where more profit is made than others. Economics aside, how a drug interacts within its surroundings is a vital consideration for many modern-day therapies and pharmaceuticals. Despite all the research out there, there is still a need to find more effective methods of determining what effects different drugs have on the heart of a patient; but achieving this is not as easy as other organs.

Over the years, scientists from both academic and industrial sectors have come up with a number of ways to assess drug toxicity on the heart. The main, and most promising, way is by analysing how the contractile force of cardiomyocytes – that is, the cells involved with muscular contraction in the heart – changes in the presence of a drug.

Many different biosensing platforms have been trialled, with many more being conceived at a fundamental level. One platform which has emerged at the beginning of this year is a specialist crack sensor which uses a cantilever arm to directly measure the contractile force of the cardiomyocytes. 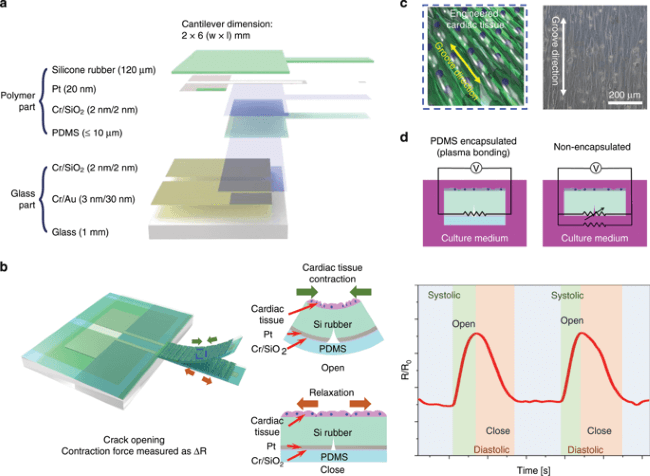 What are Crack Sensors used for?

Crack sensors are not often seen in the medical space, although there have been some developments in the last few years into different strain-based sensors for biological applications. Crack sensors are traditionally found in the construction, civil engineering and aerospace industries to detect structural movement, but like anything, applications expand. Regardless of the application, crack sensors are a type of displacement sensor which measures positional changes of the subject it is measuring. While different types often have slightly different working mechanisms, the general principles remain the same.

Development of a New Crack Sensor

The sensor which has been developed by Dong-Wong Lee et al is a combination of a cantilever and a crack sensor. The researchers have taken silicone rubber and fabricated it into a geometry that enables a section to be loaded on top of a glass layer, while a small arm extension was left outside of the main part of the device. This extension is the cantilever, but the whole layer being made of the same material enables it to be responsive. The surface of the silicone was patterned with a platinum layer and gold electrodes were attached to the platinum to create a complete device. The cantilever had built-in ‘cracks’ that could expand and contract with an applied force.

One of the key features of the sensor which enabled it to be used in a biological setting lay in its coating. The sensor (but not the cantilever) was coated with a thin layer of the polymer, polydimethylsiloxane (PDMS). Because the sensor was encapsulated within a ‘polymer shell’, the durability and usability was vastly improved (over non-coated prototypes), meaning that it can be used in harsh biological environments (such as cell culture mediums) for long time periods without becoming damaged.

Working Principle of the Crack Sensor

All sensors have different properties, and many are fabricated with the intended application in mind. The working principles of this sensor are quite specific, with patterned sections on the silicone surface being responsible for aligning the cells on top of the cantilever. When the cells induce a compressional force change, it causes the cracks within the rubber and platinum on the cantilever to open. These changes are detected because gold electrodes are coupled to the platinum material, linking it to an external circuit involving transistors. The sensor’s resistance is changed as a function of the induced strain from the cells, enabling any changes to be recorded. The sensor was found to have a gauge factor of 9 x 106 at 1% strain.

This sensor is not a device which will be in direct contact with the heart, nor will it be directly used on a patient themselves. That would be too invasive for a cytotoxicity study. This sensor is a device that could be used at the pre-clinical and clinical stage trials of drug trials when scientists are trying to work out whether the drugs will induce any negative effects to a patient, before the drug becomes approved. Instead of direct patient use, it is a device that will be submerged into cell culture mediums which contain the cardiomyocyte heart cells, and the sensor can be used in these in-vitro studies to determine the effects that a drug is likely to have on the heart before it is used commercially.

When trialling the sensor, they tested its efficiency and workability by testing the sensor on cardiomyocyte cells in the presence of verapamil, quinidine, and isoproterenol – all of which are known cardiovascular drugs – to stimulate a response. The sensor has shown promise with it being able to measure the force of cardiomyocytes for 26 days and in this time measured the equivalent of at least 5 million heartbeats across both aqueous and cultured mediums.

Overall, for measuring the drug-induced force on cardiomyocytes, the sensor has a high sensitivity, a good reproducibility, and long-term stability, but a bit more work is needed on the cantilever design to ensure that cells are always present on it during analysis.

While there are specific results within this study on some drugs, should research into these types of sensor continue, the wider implication is that they could become an effective pre-clinical and clinical analysis tool for determining how different drugs could affect the heart. This could help to produce more accurate clinical results when applying for drug approvals; and it also offers a way of seeing if any changes need to be made at the initial drug development stage to make the drug safer. On the other hand, such tools could offer a way of better characterising already established drugs to obtain more in-depth analyses regarding any potential side-effects (or at least to see if the results coincide with the current optical methods used to provide more conclusive evidence). While it is all purely academic at this stage, the potential for commercial development is there.

Bluetooth and IoT security platform claimed as a world first