Let There Be LiFi

Although thanks to the universal adoption of smartphones and the increasing ubiquity of smart speakers, not to mention smart TVs, games consoles and computers that number will likely be much higher.

While the average family wireless router can accommodate around 250 devices, the growing number of wireless devices on the network are all competing for bandwidth.

It should come as no surprise that Netflix starts buffering when someone starts downloading a weighty game update on their Xbox in the other room - even with decent download speeds.

Bandwidth is finite and some devices are far hungrier than others. The more connected devices, the more bandwidth is shared. 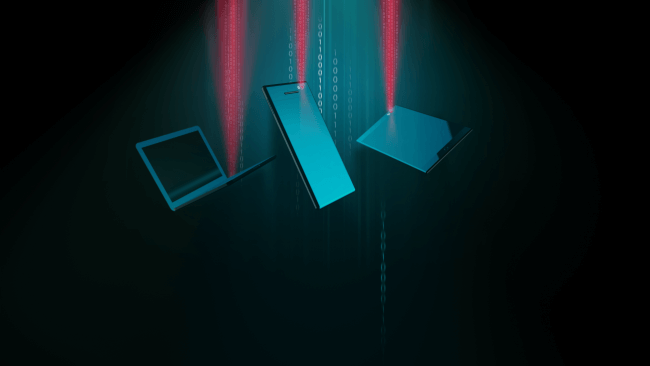 But there’s a far bigger issue. The radio spectrum upon which we rely to send and receive the prodigious amounts of data we create is becoming crowded. Experts fear, between the ever-expanding Internet of Things and increased military usage, this will lead to spectrum crunch. Or - to put it another way - total network collapse.

In a world in which people expect connectivity with their cappuccino and broadband on their bus ride, this is very bad news indeed.

Step into the LiFi

As any self-respecting sci-fi geek will attest, light works incredibly well as a means of transmitting data. Star Trek had it nailed years ago.

It’s why BT has spent billions of pounds replacing copper wiring with fibre optics across the UK. And will be spending, most likely, billions more to finish the job.

It’s needed too because as a country, the UK has an insatiable need for data - like most of the developed world. Customer expectations are so high that being able to connect to the internet, it has become a factor when deciding where to eat and even shop.

Coffee shops can offer all the pumpkin spice skinny hot chocolates they want. If it doesn’t come with free WiFi then indications are trade will suffer.

Unlocking new levels of data and bandwidth - over-priced novelty beverage aside - is a genuine priority for consumers, tech firms and governments alike.

There is an unspoken recognition that we all thirst for information, whether it’s researching soft robotics or which of the Love Island couples are still together.

LiFi - a mobile wireless optical network technology - looks like it may be playing a major part in next-gen communications.

It works by transmitting data via rapid modulation of LEDs. Imperceptible to the human eye, the data spectrum for visible light is 1,000 times greater than radio frequencies. Developers of the technology have tested LiFi at speeds of 224Gbps in lab conditions. Although they expect 1Gbps in the real world. Which is still 100 times faster than conventional WiFi.

What this means is the world is going digital for real this time.

Radio waves - as with your common or garden wireless radio - are prone to interference. If you live in a house built around the turn of the 20th century, good luck getting decent signal through those thick interior walls.

LiFi technology on the other hand is a tight area of illumination which means little or no interference. It’s also far more secure because it’s a confined beam of light. As opposed to a scattergun broadcast of radio waves that can be easily intercepted.

The LiFi-XC is the world’s first certified, complete LiFi system.

Hence why doing...more or less anything on an unsecured WiFi network is akin to handing your wallet to a criminal while whispering your pin number in their ear.

As a more secure, more reliable and faster successor to WiFi, experts predict LiFi as an industry will be worth $75.5 billion by 2023.

There’s No LiFi Without Darkness

Of course, the technology isn’t perfect.

For a start, LiFi doesn’t work in the dark. Obviously. Although the LEDs can be dimmed to near darkness - but not off - and still perform. Tests have proven the LiFi technology enabled LEDs can perform at high levels when turned down to just 60 Lux.

This broadens LiFi’s applications as it can be used where light levels need to be low - such as theatres and other venues.

One of the biggest advantages of LiFi also happens to be one of its drawbacks. LiFi relies on a confined beam of light to send and receive data. This requires line of sight in order to work.

While LiFi can still work if there are surfaces upon which the light can bounce, the signal and performance will be affected. This poses a challenge for the developers of this technology as it effectively demands a relay system that passes the signal from one LED to another.

Otherwise, something as simple as walking from one end of the house to another would be an insufferable experience.

For these reasons, many see LiFi as being a complementary technology to WiFi. As even a slight decrease in load on WiFi networks would make a marked difference. 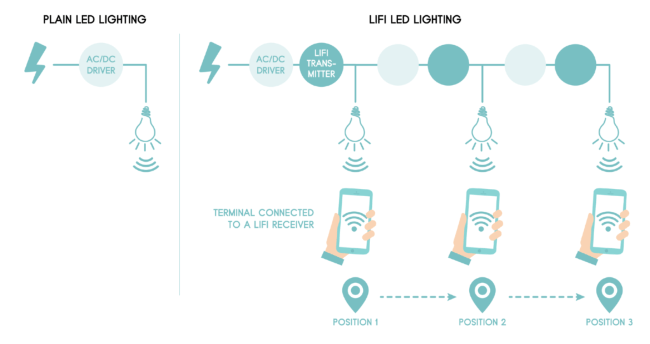 Where LiFi will win big however is in environments where the technology and/or the person will stay largely static.

Offices, where even laptop users tend to stay in roughly the same place, can enjoy prodigious download speeds without the irritation of being booted off the WiFi because too many people are listening to Spotify.

Similarly, with the innovations surrounding in-flight entertainment on the way, LiFi is an obvious and highly effective way of providing passengers with a reliable, fast service on which to watch streamed content.

On the basis that most passengers only get up to stretch their legs or use the facilities, line of sight won’t be an issue. Most passengers would happily pay for an internet connection that powerful when they’re on a long flight. Especially if they have young children who need entertaining.

LiFi is rapidly advancing. Investments from Nokia, Deutsche Telekom and Liberty Global (to name a few) signals that there is a real determination and drive to perfect this emerging technology.

This is underpinned by early adopters installing the technology in their offices around the world. Between the two halves of the market, they are cultivating a ready and eager market.

Companies like Pure LiFi are putting all their focus into refining the technology in order to overcome the biggest objections holding wider adoption.

It may well be that for the first few years LiFi - like WiFi in its infancy - is reserved for the devices that can benefit the most from it. So homes and businesses will have a mixture of technology solutions.

Smart speakers, smart TVs, gaming consoles and desktop computers get the benefit of LiFi as they are static more or less throughout their entire lifespan. Smartphones and laptops will have to slum it on the WiFi. But as those devices lack the processing power anyway, that’s not necessarily the end of the world.

The dominion of WiFi is such that for LiFi to stand any chance of competing, it needs to be a near perfect alternative. For LiFi to achieve mass-market appeal there is no room for a Betamax vs VHS showdown. It simply has to be the next technological step, like moving from dial-up to broadband.

It just remains to be seen whether or not the average customer can see the light.

Breakthrough chip materials and processes. Record mergers and acquisitions. 2015 was a bus...