How wireless modules bring the Internet of Things to life

Tony Milbourn, Vice President Corporate Strategy at u-blox AG, details some applications in the “Internet of Things that Really Matter”, and how wireless modules help enable them.

Dramatic growth in the Internet of Things (IoT) has been widely reported in recent times. While many media reports have focused on rather trivial consumer applications – the toothbrush connected to your smartphone being one example – those discussed here relate to the “Internet of Things that Really Matter”. In other words, a few examples of applications that improve our lives through greater security, productivity or convenience, or a combination of these factors.

The IoT means different things to different people but there are common fundamental elements to most applications: one or more sensors, an application processor, a connection to the Internet - usually via one or more wireless protocols - and data analysis in computers in the cloud. In fact, one distinction between M2M and IoT is that IoT includes data analytics that may sometimes be based on data coming from different systems owned by different companies.

When the “things” are mobile, for example in a truck or car, there may also be a need to determine their location in using satellite global positioning (GNSS) receivers or, for greater accuracy, a combination of data from GNSS, cellular networks, Wi-Fi hotspots and perhaps even wheel tick sensors on the vehicle (wheel tick sensors are used for dead reckoning to track a vehicle’s position when it is out of GNSS range – in a tunnel, for example).

Where large volumes of data are aggregated from many sensor nodes, powerful computers in the cloud can host complex databases and analysis tools then deliver information services to customers. Figure 1 gives an overview of IoT connectivity. 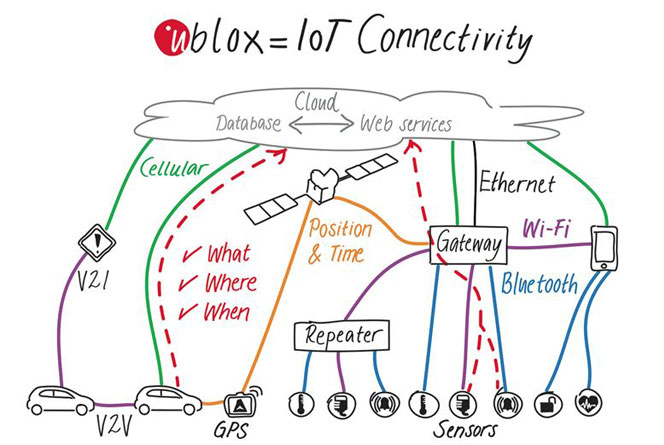 Figure 1: IoT connectivity is heavily dependent upon wireless technologies: Bluetooth, Wi-Fi, cellular networks from 2G to 4G, and GPS/GNSS being the most prevalent

Because Bluetooth is now ubiquitous in smartphones, tablet computers and notebooks, it often forms the first link in a chain of connectivity from sensors to the Internet. The subsequent link can be via a wired network, Wi-Fi gateway or cellular radio connection.

Bluetooth low energy, popularly known as Bluetooth Smart, has been a key enabler for many IoT applications thanks to its much lower energy consumption (100x less, in some applications) and lower latency than Classic Bluetooth.This comes at some penalty in terms of maximum data rates. Many sensors don’t produce much data so the 100 kbps application throughput of Bluetooth Smart versus the 2.1 Mbps gross throughput rate (1.5 Mbps net) of Classic Bluetooth v2.1 with Enhanced Data Rate (EDR) is perfectly adequate. For example, utility meters or heart rate monitors require only minimal bandwidth to deliver data as they perform their respective tasks. Another advantage of Bluetooth Smart over Classic Bluetooth is its improved data security. It uses AES-128 encryption – sometimes described as bank level security – an important factor if wireless links are going to be carrying sensitive information that could be intercepted, such as a person’s medical data.

The next link in the Internet connectivity chain will usually be via Classic Bluetooth, Wi-Fi or cellular radio. Wi-Fi offers much greater bandwidth than Bluetooth, up to a theoretical maximum of 600 Mbps using 802.11n and the latest cellular radio networks allow up to 150 Mbps download and 50 Mbps upload speeds.

Standards for cellular radio networks have evolved rapidly. Although data rates for some applications may be modest, and 2G radios are cheaper than their 4G counterparts, for many designs it makes sense to design with some degree of future-proofing in mind. This can mean implementing a 4G connection now – particularly if it features automatic “fallback” to 3G or 2G when a 4G network is not accessible. Incidentally, u-blox has been helping its customers through the 2G-3G-4G transition by using a nested design philosophy for its GNSS and wireless modules. This means maintaining form factor and software continuity. Customers simply drop the upgraded version of each module onto an unchanged printed circuit board and start testing. The principle is illustrated in Figure 2. 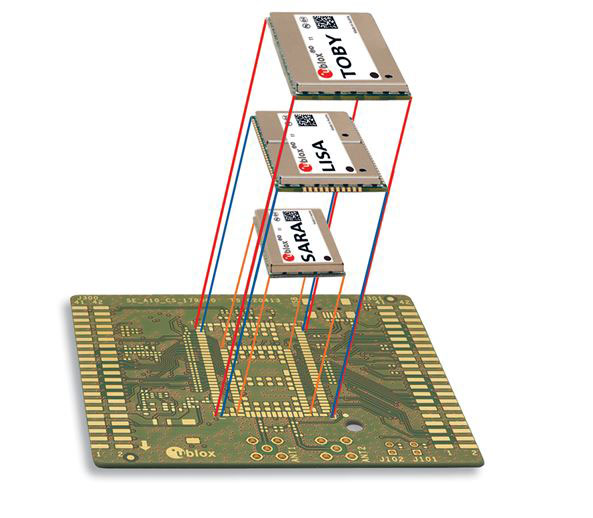 Figure 2: A “nested’ design philosophy for cellular radio modems makes it easier to upgrade as standards evolve (2G-3G-4G) and product improvements are implemented.

Wireless connectivity is the glue that binds the IoT together; an important decision for product designers is which wireless technology to adopt for which task. Sometimes choices are limited by available infrastructure, or answers are very obvious for other reasons. At other times, there is an opportunity for choice, or to adopt a multiradio strategy and allow the end customer to choose. While some companies will opt to create proprietary wireless designs around one or more chips or chipsets, maybe even writing their own Bluetooth stacks, many are turning to ready-certified modules to simplify and accelerate product development, reduce engineering risk, guarantee quality and lower both non-recurring engineering (NRE) costs and unit costs. Furthermore, many modules now integrate more than one wireless technology, which promises further space and cost savings in the end product. Development time is reduced, the potential interference issues associated with co-located radios operating within the same frequency band have already been addressed, and the technical risks of implementation are minimised by using these multiradio modules.

While there will always be some applications where it is more economical to create wireless designs based around a chip, wireless modules are now manufactured in such high volume that there is rarely a cost penalty for the many benefits they offer. Here are a few examples of how they are being used today and how they may be used tomorrow.

A medical infusion pump with Bluetooth Smart and Wi-Fi

Bluetooth Smart may be used with a handheld scanner to make sure that a medical infusion pump is connected to the right patient and that the right medication is being given. The Bluetooth connection carries very little data, but within the same pump a higher bandwidth Wi-Fi link sends continuous monitoring data over the hospital network, as shown in Figure 3.

Figure 3: Using a multiradio module in an infusion pump is a compact, cost-effective way to integrate a variety of configurable wireless standards

The u-blox ODIN-W262 multiradio wireless module, shown in Figure 4,is designed for exactly this kind of application. It measures 14.8 x 22.3 x 4.5 mm and supports multiple, concurrent Wi-Fi (2.4 GHz and 5 GHz), Classic Bluetooth and Bluetooth Smart links. This gives design flexibility and the module is simply configured for the application using AT-commands. Radio type approved in countries throughout the world, it even has a built-in antenna to make adding multi-protocol wireless connectivity to any product as quick and easy as possible. 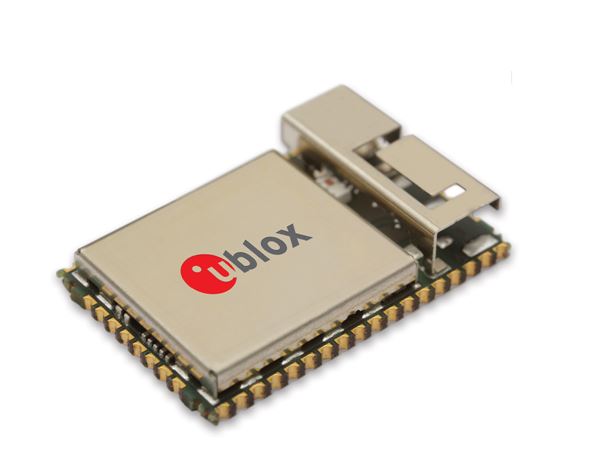 This flexible module may also be used in point-of-sale retail applications. Here, Bluetooth Smart can be used as a proximity beacon so that a hand-held payment device knows which receipt printer is nearest to it. Data can then be transferred to that printer over Classic Bluetooth or Wi-Fi.

There’s growing demand for in-car wireless connectivity, not just for hands-free phones but also for rear-seat streaming of HD video and audio entertainment, rear view camera communications and even graphical user interface mirroring so that your car’s touch screen can look exactly like exactly like your smartphone screen, when you want it to. Once again, because so many wireless technologies are involved, multiradio modules make a lot of sense. The u-blox EMMY-W1 automotive-grade module is designed for just such applications. It combines dual-band Wi-Fi with IEEE 802.11 ac with dual-mode Bluetooth Smart Ready v4.1 and near field communications (NFC) for keyless entry. In addition, it has an integrated LTE co-location filter so that both Wi-Fi and cellular antennas can be located in close proximity to each other, for example in a shark-fin antenna on the car’s roof.

4G LTE cellular radio modem modules like those in the u-blox TOBY-L200 family are now capable of up to 150 Mbps download speeds - sufficient to stream 8 simultaneous HD video feeds. These modules feature the HSPA+ and GSM/GPRS fallback function mentioned earlier to ensure that they still function, albeit at reduced performance, when a 4G network is not available.

Of course, GNSS modules are already used extensively in vehicle navigation systems. When real-time GNSS data is combined with cellular base station and Wi-Fi hotspot information, the accuracy of mapping and navigation systems is enhanced, particularly where satellite visibility is compromised, for example in tunnels or underground car parks.

Wireless connectivity in cars will also be a facilitating technology for vehicle to vehicle (V2V) and vehicle to infrastructure (V2X) communications. Making driving safer is the prime motivation for the implementation of advanced driver assistance systems (ADSAS) that are enabled through this.

Many of the wireless technologies used in cars are equally valuable in commercial vehicles, as shown in Figure 5.

Using GNSS, fleet operators can know the precise location of every vehicle in a fleet and track vehicle performance at the individual and fleet level. They can monitor fuel usage, idle time and vehicle diagnostic codes. They can optimize scheduling and routing, improve customer response times all while reducing fleet administrative overhead. This monitoring also helps reduce speeding violations and other and deters vehicle theft and unauthorized use. In addition, by integrating cellular data from a suitable module, real-time traffic information can be received.

Modules such as the u-blox CAM-M8C offer simultaneous GNSS operation for GPS/GLONASS, GPS/BeiDou, or GLONASS/BeiDou to deliver accurate, jamming-resistant and reliable positioning anywhere in the world. It has a built-in antenna and integrates a u-blox M8 satellite receiver, crystal oscillator, SAW filter and low-noise amplifier to minimize implementation time and effort.

Short-range radio modules, perhaps employing Wi-Fi and Bluetooth links, can be used to communicate engine data, to connect to hand-held terminals, including mobile phones, or to alert drivers to open doors or other vehicle problems.

Cellular radio modules (like the TOBY-L200 devices) then transmit data back to the fleet operator, perhaps enhancing it along the way using a cloud-based service.

These are just a few of examples of “Internet of Things that Really Matter” applications we see today. The growth in LTE networks in particular, will encourage product designers to include Internet connectivity in devices that have never before used it. This will improve the user experience of these products, provide manufacturers with information that will help them make better products, and enable service providers to deliver new services to consumers, creating new business models and profit opportunities along the way. In all of these applications, wireless modules make it as easy as possible for designers, even those without wireless experience, to make their innovations part of our connected world – the IoT.

Automotive Suite v1.0 gets into gear

The here and now of augmented reality