Robots in the workplace can be wirelessly charged at a distance using Gallium Nitride transistor technology which can cope with the high energy levels needed.

With more and more robots and autonomous vehicles in factories and other workplaces, recharging these machines that work day and night is important. While mobile phones that can be wirelessly charged are becoming commonplace, their charging pads require the phone to be placed accurately, more accurately than, for example, a large warehouse robot may be able to manoeuvre. The solution to a broader charging area and charging at a distance is a higher power and higher frequency.

“Gallium Nitride shows up its best at high frequencies, compared to Silicon. Silicon is used in low power 5-10 Watts chargers,” says Gallium Nitride (GaN) based power management device specialist, GaN Systems’ Vice President, Paul Wiener. “To get to 30W and kilowatts, the efficiency becomes really important because every watt you don’t use is lost as heat and that’s wasteful.” 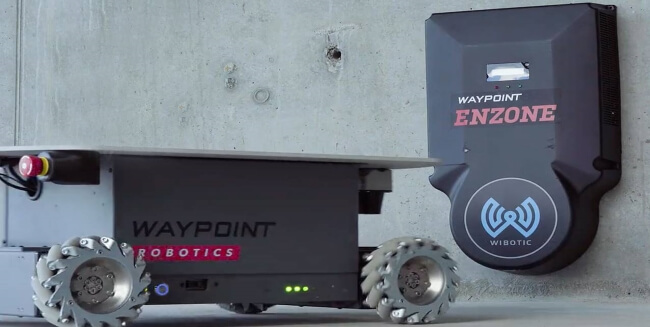 The high power and high-frequency capabilities of Gallium Nitride based power electronics mean robots can be wirelessly charged at a distance.
Credit: GaN Systems
This technology enables robots to be freed of any cables and be able to operate in all axes, with a complete 360-degree of freedom. The technology to realise this is Gallium Nitride (GaN) based electronics operating at high frequency. Robots can charge at multiple locations and multiple times per day without having to spend time docking. This can mean fewer robots are needed to complete the same amount of work and operations can continue all day long without staff intervening.

Wireless charging sees higher efficiency with a lot of power and higher frequencies and that higher efficiency avoids heat sinks and the heating of the electronics, according to Wiener. He explains that customers will use wireless charging at a frequency of 500 kilohertz (kHz) and up to one megahertz (MHz) is also used. Silicon, on the other hand, is limited to frequencies of 100-200kHz, which is why the GaN technology needs to be used. With no moving parts in a wireless system, there is no limit on the number of charge cycles a system can deliver.

The energy transmission signal quality, known as the q factor, is key for the efficiency of wireless power transfer. The q factor and frequency can be optimised and Wiener points to 6-13MHz as the optimal range to maximise efficiency while allowing for a widespread in coupling to accommodate the spatial freedom. Thirty-five megahertz or 42MHz are other frequencies customers use and made possible because GaN can operate with frequencies up to 50MHz.

As well as industrial robotics, Wiener explains that more robust wireless charging can help first responders. Fireman and police radios face heavy use and a challenging environment, with firefighters, for example, operating in very wet environments at times. Wireless charging allows the radios to be completely sealed and waterproof, stopping any problems with the water or any other contaminants. Wiener adds that wireless charging points can power a drone network with drones recharging at every station they stop at in their network between journeys.

5G – The Future Network for All