Tiny robots that can jump and swim are the goal of researchers following the creation of a wirelessly powered walking machine only two millimetres long.

Called a micro-bristle-bot, the tiny walking machine is 1.8mm wide and 0.8mm thick and made of a piezoelectric actuator glued onto a polymer body. Some micro-bristle-bots have four legs, but some have six legs. The bots can walk 288 metres per hour. Weighing about five milligrammes, the polymer body is created by 3D printing it using two-photon polymerization lithography (TPP). The 3D printer can produce smaller robots, but then it is difficult to remove them from the tweezers used to pick them up. These micro-bristle-bots are believed by the researchers to be the smallest robots powered by vibration.

“We are working at the intersection of mechanics, electronics, biology and physics,” said Azadeh Ansari, an assistant professor in the school of electrical and computer engineering at the Georgia Institute of Technology. “We are working to make the technology robust, and we have a lot of potential applications in mind.” 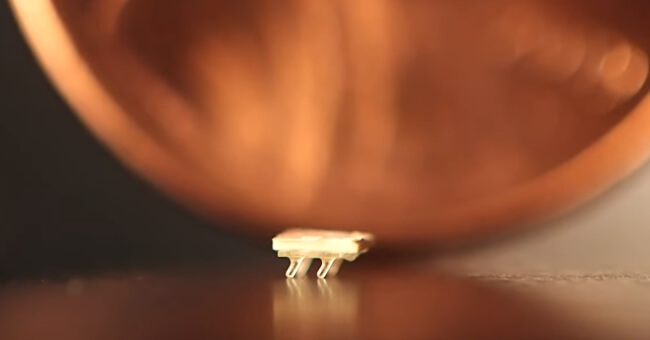 The TPP process that creates the polymer body polymerizes a monomer resin material. Ultraviolet light is used on the resin to build up, chemically develop, the body. The remaining resin is washed off and the robot’s body is all that is left. The TPP process is slow, so the researchers are seeking ways to make it faster to create hundreds or thousands of micro-bots at a time.

Robots as tiny as the micro-bristle-bot, and even smaller, are expected one day to operate in swarms, acting together to monitor environmental change or move materials. Once small enough, they could repair injuries inside someone’s body. The Georgia Tech researchers have built a test area where multiple micro-bristle-bots can operate so the capabilities of the tiny robots can be fully understood.

Piezoelectric actuators’ vibrations or ultrasound can provide the energy for the robot to move its legs up and down, propelling it forward. The legs have specific angles that are designed in such a way as to make them bend and move in one direction in response to the piezoelectric vibration. The characteristics that shape the legs’ responses are leg size, diameter, design and overall geometry. The amplitude of the vibrations controls the speed at which the legs and the micro-bots move.

The robots can be designed in a variety of ways to respond differently to the various possible vibration frequencies. This allows researchers to control individual bots by adjusting the vibration frequency. The piezoelectric actuator is needed to generate the vibration because there are no batteries small enough for the micro-bristle-bot. Vibrations can come from a piezoelectric shaker beneath the surface on which the robots move, from an ultrasound or sonar source, or from an acoustic speaker.

Will the Large Hadron Collider and IDT finally agree that the answer is 42?

When is dual fusing in power supplies really dangerous?