Wearable health devices could be powered by sweat

Health monitoring devices including those that deliver drugs could be powered by the patients’ own sweat using tiny microbial fuel cells embedded in what is called electronic skin.

What is Electronic Skin?

Electronic skins or ‘e-skins’ are novel platforms for electronics that can carry out health monitoring, diagnostics and therapeutics, such as transdermal drug delivery. A stable power supply is the most critical factor in developing practical e-skins and a realistic and accessible power source for smart, stand-alone, always-on electronic skin systems, is human sweat. The ammonia and organic substances found in sweat can be processed by bacteria like, Nitrosomonas europaea, and generate electricity which, as part of a microbial fuel cell, would create a current.

“Our preliminary data shows that about 20uW/cm2 can be produced, which will be further improved,” says Seokheun Choi, an associate professor of electrical and computer engineering at Binghamton University, State University of New York. “Among many energy-harvesting devices for e-skins, biochemical energy harvesting from human sweat is arguably the most underdeveloped because of immature technologies.”

Human skin is a harsh environment for electronic skin power generation because it is cool, dry and acidic, but, Choi adds, sweat is readily and constantly available in sufficient quantities and contains chemical and biological substances that bacteria can produce electricity from. Conventional batteries are considered inferior because they have to be replaced or recharged from an external power source and are heavy and bulky in comparison to the e-skin fuel cells Choi and his colleagues are aiming to develop. He is working with Ahyeon Koh, an assistant professor of biomedical engineering at Binghamton. 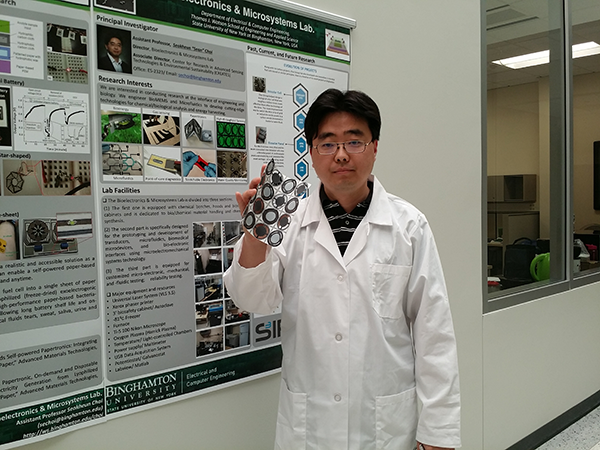 Following the development of stretchable, biocompatible and self-healing electronic materials, which can be affixed to the human body, what is needed is this stable power supply to make the e-skin monitoring, diagnostics and therapeutics practical realities, according to Choi. A typical microbial fuel cell uses bacteria to oxidise organic and inorganic substances to generate current and the electrons produced are transferred to the anode and flow to the cathode, linked by a conductive material, like a normal battery.

Choi explains that, “normally in a bacterial reaction, those electrons would bond with oxygen, but we can build out biobattery to limit oxygen and substitute an electrode. Then we can capture the electron flow and use it for powering devices.” Choi’s system will also be able to store sweat. “We will develop a skin-interfaced system for sweat collection and storage so that our device can operate with the stored one,” he explains.

The United States government’s National Science Foundation awarded a $452,000 grant to Binghamton University for human sweat power research. The project is called, Power-on-Skin: Energy Generation from Sweat-Eating Bacteria for Self-Powered Electronic Skins. Choi sees other applications in soft robotics and human-machine interfaces. He is also the bioelectronics and microsystems laboratory director and associate director of the University’s Center for Research in Advanced Sensing Technologies and Environmental Sustainability.