The importance of module scalability for wireless systems

The pinout of a module may not seem to be a critical design issue, but the ability to easily change wireless modules to handle different frequencies and protocols around the world is a key advantage for designers in the Internet of Things. By Gordon Serpis, Solid State Supplies.

Technology moves fast, and sometimes it can be tough for equipment makers to keep up. Chip suppliers add new features to make use of new standards, and optimise the power consumption to get longer battery life.

The pinout of a module may not seem to be a critical design issue, but the ability to easily change wireless modules to handle different frequencies and protocols around the world is a key advantage for designers in the Internet of Things (IoT) and machine-to-machine (M2M) applications. Connectivity is key to this, with different cellular protocols used around the world. Providing location information is also an increasingly important element for mobile designs and designers want to be able to use the same hardware in all regions and on both mobile and static links.

There is also the issue that cellular networks are in different states of development around the world. While emerging markets still have growing 2G networks, more mature markets are capping these and developers need to support 3G and 4G technologies to ensure the systems can be used for the next 10 to 15 years.

The challenge though is to maintain a compatible footprint for wireless modules as the pressure to reduce size and add features increases, both for hardware and even for software. This doesn’t necessarily mean the same size module, but ensuring the connection footprint is the same means different modules can be dropped in for different regions. There is another trade-off here between the use of different modules and more flexible RF designs. There is a trend to having a more flexible front end with software defined radio that can handle multiple RF bands and multiple protocols in a single design. However these still require field programmable gate arrays (FPGAs) or large digital signal processing (DSP) chips and may not be cost effective.

So the challenge for today’s designs is to ensure that the front of the system design can use a common module footprint with a range of different capabilities. The packaging can help with this. Sierra Wireless uses a Land Grid Array (LGA) package to provide a standard format for the module, but specifying a standard footprint goes a step further to support compatibility throughout a family of modules and across different families, both now and in the future.

These modules all deliberately use a 157pin interface in a 22 x 23mm array and can be installed in a snap-in socket for easy configuration.

To support the migration to this technology, and to new technologies in the future, Sierra Wireless has explicitly developed a common flexible form factor (CF3™) for multiple generations of the modules. This CF3 means the power advantages of the WP series can be used in designs that currently support the HL Series of modules, where the 22 x 23mm module supports quad band 2G and pentaband 3G cellular networks. This means designers can easily take advantage of the new technology to provide worldwide coverage on 2G, 3G, 4G networks. 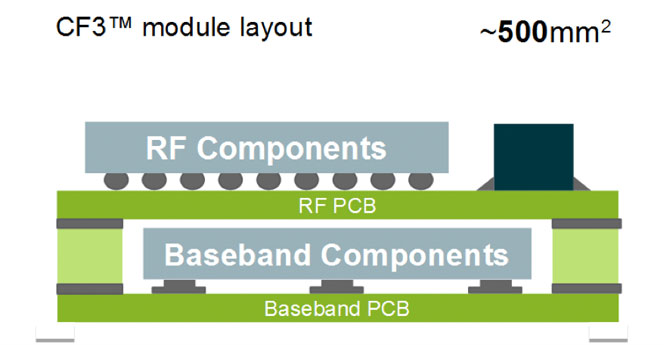 The common footprint of CF3 comes from advanced packaging technology

CF3 defines a common, consistent footprint across the AirPrime HL and WP families without restricting the functionality. There is a common set of pins for the core functions, with optional functions such as GPS defined on the same pin on all the modules. But it also allows a set of custom pins to be used so that developers are not restricted by the common footprint.

Similarly, this kind of footprint scalability needs to be supported by the software to provide an easy upgrade path to next-generation network technologies. The open source Legato platform for IoT is based on the Linux operating system and enables developers to reuse software components and applications in future designs with those same modules. Sierra Wireless also has cloud-based data storage and management services to allow the deployments of systems to scale easily.

Legato tightly integrates Wind River Linux, a commercial-grade Linux distribution with an M2M application framework and development tools. This in turn is based on the Yocto Project open source infrastructure that ensures embedded projects have consistent support with an optimised Linux kernel from a range of vendors. This avoids getting stuck with an obscure fork of the operating system and provides long term support.

This is pre-loaded on the AirPrime WP smart modules, allowing developers to focus on the core applications. The Linux base allows it to be easily ported to any external processor, meaning it can be used across a deployment with a mix of hardware solutions and re-used from one generation of hardware to the next. It also removes the complexity of the wireless integration for the different protocols.

All this helps to make the M2M application development for the modules quicker, easier, and more flexible by providing a tested and validated solution that includes connectivity, security, and device management.

The common CF3 footprint provides other advantages to the engineer. It forms the heart of the Project mangOH, an open source reference design for the CF3 form factor modules. Used with the HL and WP Series, this provides an out-of-the box wireless and cloud connected reference design for rapid prototyping of new ideas for IoT developers. The mangOH has an Arduino connector so that additional shield boards can be added, and its three IoT connectors are fully supported by Sierra Wireless’ Legato Linux. This allows developers to try out multiple wireless and sensor technology combinations for the optimal design. Once the prototype is complete, the same open source design and the modules can be used in final production with sockets, moving to soldered versions for high volume.

Sierra Wireless is not the only module maker to adopt a common footprint, but by formalising CF3 and committing to use it across multiple generations, new technologies and optimisations can be adopted more easily by the developer. Being able to develop new software on a common platform and re-using software components from the previous generation supports the ability to drop a new module into the existing socket. This not only allows the developer to deliver wireless M2M and IoT designs in multiple regions with the same design, but across generations of technology as well.

Gordon Serpis is Product Manager for wireless products at Solid State Supplies. Gordon has worked in the electronics distribution industry for 40 years. He was instrumental in the creation of 2001 Electronic Components in 1988, which was acquired in 2013 by Solid State plc. At the time of the acquisition, Gordon held the position of General Manager, and has since been responsible for managing the wireless products group at Solid State Supplies, including principals such as Bluegiga and Sierra Wireless. Gordon has extensive experience in sales, marketing and product management, having previously worked for major distributors including STC (subsequently an Arrow company).

Lawmakers in US Propose Semiconductor Boots