Apricorn has released the USB 3.2 Gen 1 Aegis Secure Key 3 2TB encrypted flash key. Developed for organisations that require large amounts of encrypted storage with a minimal footprint, the new key is the industry's first hardware-encrypted flash key of this size. Currently, there are eight capacity options ranging from 16GB to 2TB.

The key, originally introduced in 2015, was its first device to feature AegisWare, a patent-protected firmware that first introduced Forced Enrollment, Programmable PIN lengths, Unattended Auto Lock and Lock Override. At 256GB, this original version already had twice the storage capacity of any encrypted flash key on the market. Fifteen months later, it doubled to 480GB and again to 1TB in 2018. Seven years after its initial launch, the key has been adopted in various government, defence, and corporate environments and remains the company's fastest, most rugged flash key in the line.

"The Aegis Secure Key 3 line was designed to address security issues we identified in 2015 and that still plague organisations today. Most of those feature improvements have become standard in the market, including Forced Enrollment, which we developed to force users to create their own PIN before they could use the device at all," said Kurt Markley, US managing director, Apricorn. "We've consistently increased storage capacities for the Secure Key 3, which employs a mini SSD rather than flash memory, making the line bigger and faster than other hardware-encrypted flash keys. When it comes to tech – especially hardware – it's rare for a product to remain at the top of its field for more than five years, much less seven. The Aegis Secure Key 3 has become Apricorn's U2 spy plane."

Like all of its products, the key still comes standard with AegisWare, the proprietary firmware and feature set created to meet constantly-evolving security threats and business demands for highly regulated sectors such as government, defence, finance, manufacturing and healthcare. 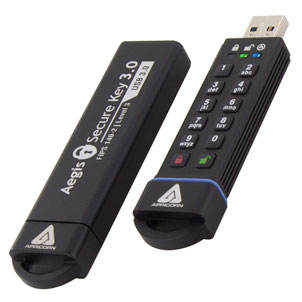