Could AI art be illegal? Getty Images CEO Thinks So

With AI imagery taking the world by storm after winning a competition against humans, there are growing concerns about its use, with some even claiming that AI art could be illegal. How far has AI come in the last few decades, why are there legal concerns surrounding AI art, and how will the industry fight against AI-generated content?

How far has AI come in the last few decades?

It is truly amazing to see just how far AI has come in the past few decades. Researchers working on the first neural nets had limited computational capabilities meaning that the first AI algorithms could not perform any practical tasks. But as improvements in hardware continued, researchers not only found ways to improve their AI algorithms but also discovered how additional hardware, such as GPUs, could be used to significantly boost the speed of neural nets.

However, researchers quickly noted that if AI systems are to improve themselves, they require real-world data, and this presented a major challenge as this data simply didn’t exist in quantity needed. Thankfully, it was around this time that the IoT industry began to blossom, providing researchers and engineers with vast amounts of data.

Fast forward to 2022, and AI has become an integral part of modern computing and, by extension, everyday life. Whether it is identifying an induvial via face recognition, identifying oncoming objects in a vehicle, or providing predictive analysis of a system in operation, AI is being integrated into all industries in one form or another. In fact, it has gotten to the point where AI is now being integrated directly into sensors to limit the processing demands of the host controller.

But one area where AI has made some unusual progress is in the arts. One common theme over the past hundred years is that an AI would never be able to compose a symphony or paint a picture. However, this seems far from true as new AI algorithms have demonstrated artistic skill by winning an art competition against humans and numerous music tracks being composed entirely by AI.

Could there be legal concerns with AI and art?

Recognising the advantages that AI-generated art presents, some businesses, such as Shutterstock, are looking to capitalise on AI art. Such algorithms could quickly be used to generate high-quality visual content that would then go on to be used by customers in websites, videos, and other consumable media. Furthermore, if customers are given access to AI, they could generate images specific to their needs, bypassing the need for digital artists.

However, there are those (such as the CEO of Getty Images) that believe AI-generated images not only pose a serious threat to artists and digital creators but may even present legal challenges. As stated before, one of the biggest challenges researchers faced with the first AI systems was having access to large amounts of data. In the case of artistic AI systems, the internet provides access to untold quantities of images that it can train itself against. In fact, AI artists can be trained against specific artists so that it produces a drawing style similar to the original artist.

And there is where the problem resides, copying. An AI may not copy a piece of work, but the fact that it is able to reproduce an artistic style could be tantamount to theft. If an AI can download, store, and learn from an image, it pulls from the internet, that storage and usage of the image for the training itself could also be considered theft. This storage of data has already presented challenges to those developing AI, such as the legal challenges faced by Clearview AI when in stored billions of faces are pulled from the internet and recent changes in UK law to allow AI developers to mine data accessible over the internet. 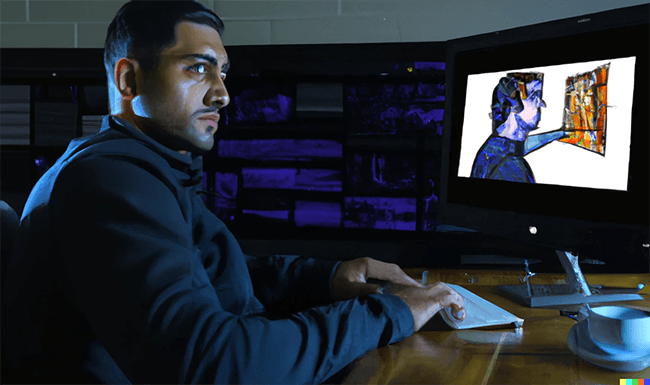 This image was AI generated by DALL-E using the description: Man sat at a computer creating AI-generated imagery in the style of Picasso.

How will the arts industry fight against AI?

Thankfully, there is one potential saving grace when it comes to AI-generate art; it requires data for learning. Even though AI-generated art has come a long way, it requires human-made art to learn from, and this means that it is possible for AI-generated art to run out of ideas and drawing styles. Granted, AI imagery may not face this challenge if it is only used for basic conceptual art for news articles (such as this one), but when it comes to truly unique pieces, current AI will never be able to deliver.

However, trying to resist progress almost always leads to failure, and digital artists will now need to learn how to love AI and how AI can help with their work. For example, future artists could use AI-generated imagery to provide a starting point before letting their imaginations run wild. AI-generated content could also help new artists discover new techniques and ideas they would have never considered.

Overall, AI-generated content presents numerous issues, especially if the AI-generating content requires human-made content to learn from. Could we see new laws preventing AI from copying works of art? Will AI continue to be adopted in areas outside of engineering? Only time will tell!