Recently, researchers from the University of New South Wales demonstrated a new 3D printing technology capable of printing solid electrolytic materials in any shape for energy storage. What challenges do energy storage solutions present, what did the researchers demonstrate, and how could it be used to improve future products?

What challenges does energy storage present?

By far, one of the most significant shifts in modern electronics has been the move toward portable wireless devices. For all the benefits cables present, they restrict where electronic devices can be used, and dependency on mains electricity only worsens this restriction. Developments made in high-energy-density batteries have allowed devices to eliminate this dependency on cables, and the introduction of wireless communication technologies enables devices to remain connected no matter where they are.

And yet, for all of the benefits provided by batteries, their very nature can restrict the capabilities of devices that use them. By far, the biggest challenge faced by batteries is weight, as the energy storage of a battery is typically proportional to its weight. Thus, a battery with twice the energy storage will power a device for twice as long but at the same time will likely double its weight (batteries are also typically the majority source of mass in devices).

Another challenge that batteries face is fire risks and energy density. To increase the energy storage of a battery, new technologies can find ways of increasing the energy density without a significant increase in mass, but this increased energy density almost always increases the risk of fire and catastrophic failure. Lithium-ion batteries are an excellent example of a technology that struggles with this. If such batteries are not correctly charged or face physical damage, they can internally short circuit, which generates massive amounts of heat and hydrogen (two things which should not be mixed together in a rich-oxygen atmosphere).

But the researchers demonstrated a 3D printable solid-state polymer electrolyte that provides both strength and conductivity. Not only does the 3D printing capabilities allow the researchers to control precisely how the electrolytic material is structured but also allow for the construction of any 3D shape. As such, it is possible for 3D printed parts to integrate energy storage into the structural elements of a design. In this case, the researchers decided to print a supercapacitor in the shape of Australia and utilised carbon electrodes with stainless steel current collectors.

The 3D printing method used to create the complex solid-state electrolyte is digital light projection which is identical to how resin printers operate. Furthermore, the electrolytic material itself was designed using nano-scale ion-conducting channels embedded in a ridged cross-linked polymer matrix yielding a supercapacitor material with a shear modulus greater than 108 Pa. 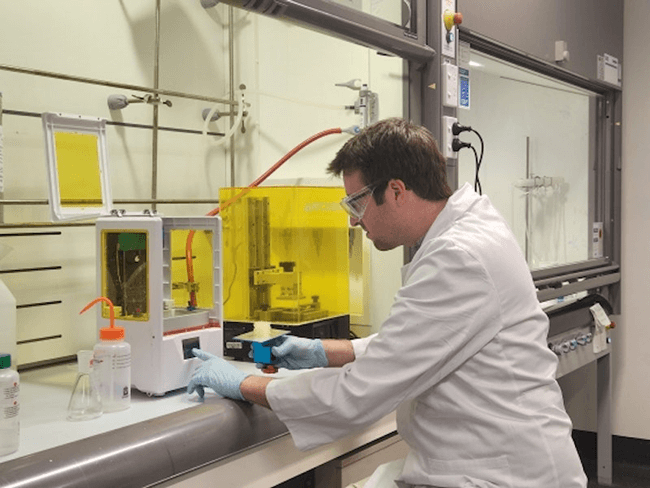 How could such technologies improve devices in the future?

One of the biggest advantages of 3D printable solid-state polymer electrolytes is the ability to give structural components of a device energy storage capabilities. By doing so, a device can effectively eliminate the need for a dedicated battery and thus significantly reduce weight. Of course, this use of solid-state polymer electrolytes will only be feasible if the resulting structural components have a greater energy capacity than a dedicated battery. At the same time, the device using the solid-state energy storage solution would have to be able to make practical use of the stored energy (i.e. offer extended operation time).

Another benefit to solid-state battery technologies is that they are inherently safer compared to liquid varieties. The reason for this comes from the fact that solid-state batteries do not swell, produce hydrogen gas, and then catch on fire due to the use of solid materials. However, the danger of solid-state materials is that they can instead become exceedingly hot (to the point where they can melt), and this can see lava-like molten material destroying anything around it (while also causing other fires to break out).

Finally, the ability to 3D print a solid-state electrolyte allows for a multi-headed printer to print an enclosure and energy storage unit simultaneously. At the same time, this also allows such designs to replace empty internal space with an electrolyte, reducing the amount of enclosure material needed.

Overall, the idea of a 3D printable electrolyte is exciting and could prove to be beneficial in low-energy applications. However, it is unlikely for such energy technologies to replace current liquid/gel-based batteries due to their impressive energy density, and we will likely continue to use current battery technologies for the next two decades.

Jack has accumulated over ten years of experience publishing product news and, more recently, blogs for the electronics industry. Over the past few years, Jack has also virtually interviewed a range of manufacturers to create unique articles that are useful to design engineers.